10-day mandatory Covid quarantine could be slashed in half if people are tested daily, SAGE says

Close contacts of Covid cases could be released from self-isolation five days early, under a scheme being drawn up by Government scientists.

Papers submitted to SAGE on March 3 suggest the 10-day mandatory quarantine period could be cut in half if people are tested daily with lateral flow kits.

They would need to get a negative result on every occasion to be released early, with the papers noting this could be ‘as effective’ as the present scheme.

Government guidelines currently require anyone who has been in close contact with a Covid case – within two metres up to two days before they test positive – to isolate at home for 10 days.

They cannot quit isolation if they test negative for Covid before this period ends, but must get a swab that doesn’t have the virus on it to be released back into society.

A senior SAGE source said the testing regime was ‘plausible’ but claimed it was not something No10 was currently looking at.

They added the study made big assumptions, namely that people would be less likely to break isolation rules if they were given the five-day testing option.

And warned people actually might be less inclined to receive a swab, which are often uncomfortable, every day. 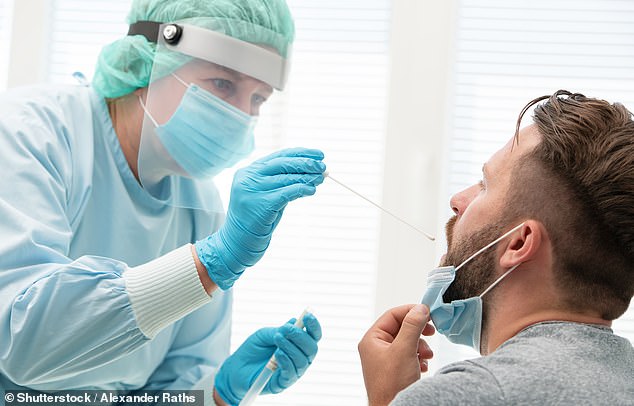 Close contacts of Covid cases could be released from self-isolation five days early, under a scheme being drawn up by Government scientists (stock)

The death rate among pregnant women has risen by 20 per cent in a year, according to scientists advising the Government.

And more pregnancies were escalated for investigation by medical chiefs this year than in the past ten years.

The document – compiled by the UK Obstetric Surveillance System – said infections with the virus were unlikely to be the sole reason for the increase in the rate, with disruptions to health services also likely to blame.

Nearly a million women are pregnant in the UK each year, of whom 700,000 give birth – 96 per cent of which were in hospitals.

SAGE spin-off group SPI-M-O modelled whether testing every day for five days could be a viable alternative to the current quarantine regime.

They said the scheme could be ‘more effective’ in reducing the spread of the virus because it could detect cases earlier and get them to self-isolate.

It would also pick up asymptomatic infections – which trigger no symptoms – that make up at least a third of cases according to official estimates.

Their paper said: ‘Assuming a three-day delay for contact notification and sending of test kits, five days of sequential testing may match the effectiveness of 10-day quarantine for the same level of adherence to each.

‘If adherence was better using daily contact testing than quarantine, then more transmission can be averted.’

They added: ‘There is little benefit to additional days of sequential testing beyond a certain point.’

The papers made no mention of whether this system could also be used for those returning from foreign countries.

Ministers cut the self-isolation period from two weeks to 10 days in December, amid warnings the period was too long and many people were not following the order.

At the time official estimates suggested only one in ten people asked to quarantine for the whole period were actually doing so.

But the UK’s chief medical officers decided the evidence was strong enough to allow it to be slashed, with the likelihood of anyone still being infectious after 10 days as low as one or two in 100.

The Government had initially been aiming to reduce the quarantine time to just a week in order to boost compliance with the scheme.

Foreign holidays are currently barred until May 17 at the earliest, but rules stipulate anyone returning to the UK from abroad must isolate for 10 days – or quarantine in a hotel if they are arriving from a red list country.

But those staying at home can be released five days early if they can produce a negative test result for the virus. 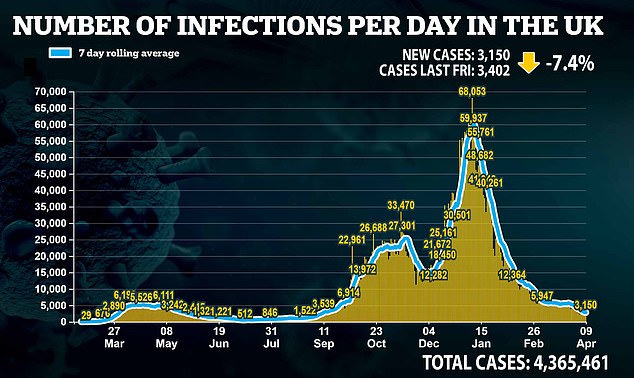 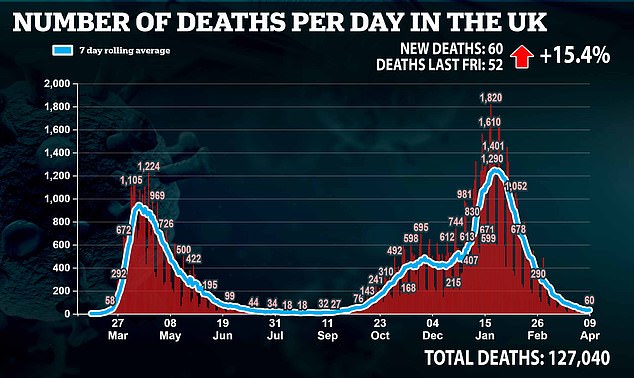 It comes after official figures showed Britain’s Covid outbreak is still heading in the right direction with cases continuing to tumble.

Department of Health bosses posted another 3,150 Covid cases today – down by 7 per cent on last week.

Another 60 victims were added to the official death toll, up slightly on last Friday’s figure. The trend over the past couple of days is likely to be a blip because day-to-day counts can fluctuate and infections have fallen consistently over the past four months.

And 550,000 more vaccines were dished out yesterday, taking Britain one step closer to the 32million mark. More than 6.5m people have now had both jabs.

No10’s top scientists also predicted the R rate – the average number of people infected by someone with the virus – in England was between 0.8 and 1.0, meaning the reopening of schools had little effect on the outbreak. It has been below one since lockdown was imposed in January.

And the Office for National Statistics estimated Covid cases had risen by just 10 per cent in a week, insisting the evidence showed the outbreak has barely changed since March. It estimated there were 160,000 people infected with coronavirus on any given day in the week ending April 3, or one in 340 people had the virus.

Experts tracking the spread of Covid said infections appeared to have ‘levelled off’ across the country, tumbling among the most vulnerable. They said there was no reason for Number 10 not to press ahead with the lockdown-easing roadmap.