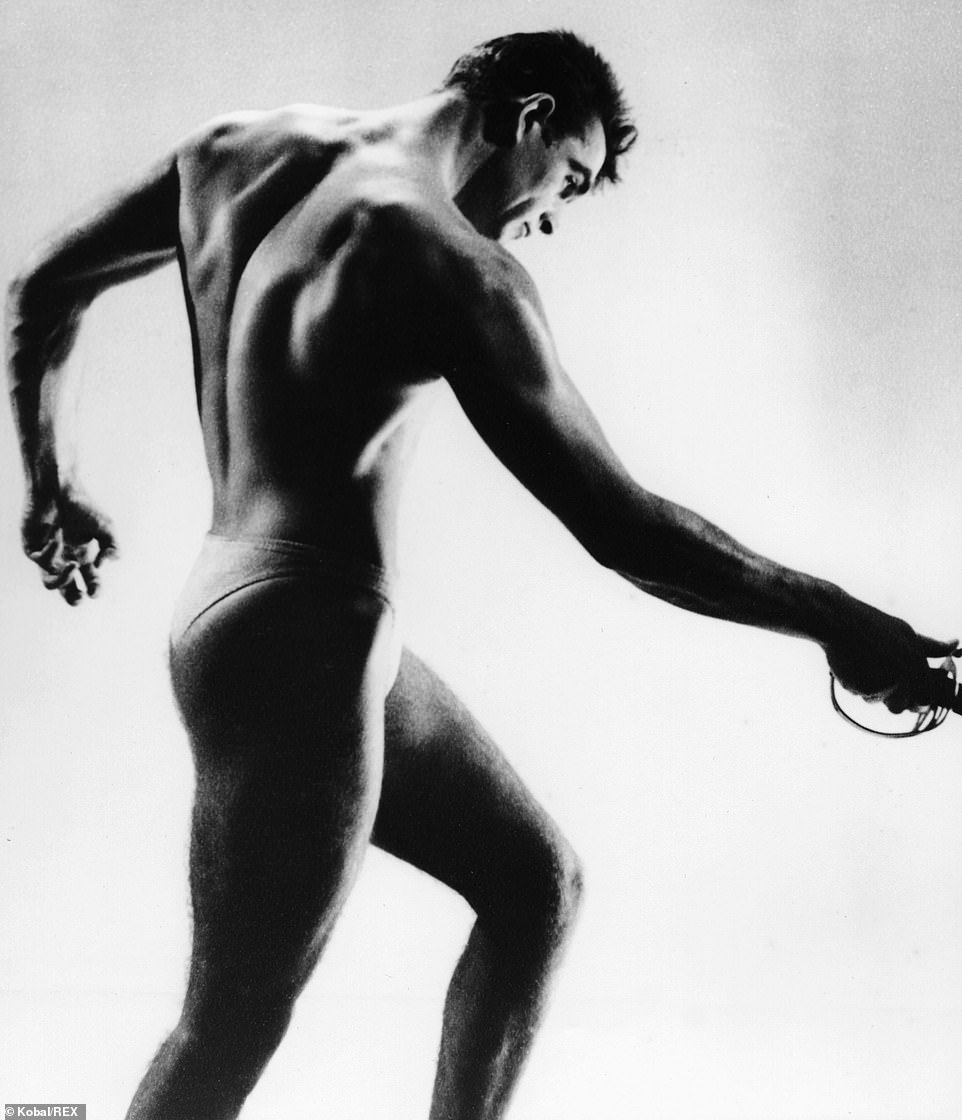 One day back in 2004 I was idly flicking through a Christie’s auction catalogue, when Lot 193 caught my eye: ‘Seven pencil, pen, ink and wash nude studies, early 1950s, of Sean Connery at Edinburgh Art College.’

Studies of naked men by unknown artists would not normally attract me but, as I was working on a project with Sean at the time, I went along to look at them. They were bigger than I expected: foolscap pages, from a proper professional drawing pad. And, yes, Sean did look naked. Ooh, Ivy.

I was sure Sean had never seen them so decided I would try to buy the sketches. They might mildly intrigue him, bring back memories — and also amuse his lovely wife Micheline.

Built like a brick Sean Connery in a body builder pose: His body was his fortune which got him started, gave him a job, and turned him into a global hunk

So I went to the auction and, blow me, I got them for £800. Plus add-ons, the total came to £983.30. Quite a lot I suppose for a joke, an amusement. But at the time I was hoping to do pretty well out of our project, if it ever came to pass.

Next time I stayed with Sean at his modest two-bed bungalow on a private gated estate on New Providence, the most populous island in the Bahamas, I took them with me. Over breakfast I told him to close his eyes. I then whipped them out: ‘Ta-da!’

He was a bit confused at first, not quite sure who it was. Even then — in his mid-70s — his memory was fading ever so slightly. But after the penny dropped, he smiled and signed four of the drawings — the ones he liked best — to authenticate them.

Sean Connery’s body was his fortune. It got him started, gave him a job, and turned him into a global hunk — lusted after by women, envied by men.

But time stales us all. Sitting beside him after we had just had a swim in his long and thin pool, I thought, hmm, if his fans could see him now. And me, for that matter.

We were two rather flabby, elderly blokes in horrible baggy swimming shorts with sagging skin and decidedly expanding tums — not to mention the man boobs.

All the same, I got his maid Sylvia to take a snap of us on my cheapo camera as a memento of, well, not quite a totally happy period in my life, as it — alas — ended in tears, but a fascinating experience all the same. One I’ll always remember.

I spent eight months with Sean, mainly in the Bahamas. His bungalow had a guest bedroom over the garage, which was where I slept, eating all my meals with Sean and his stunning French-North African wife Micheline, who seemed to live in her bikini.

Sean had had some problem with his throat and could not stand air-conditioning, so in the house they tended to use fans and wear very little.

Micheline was a successful painter, who took to her easel most days in her bikini, and I presumed that she was behind the acquisition of the statue by the celebrated French sculptor Rodin that took pride of place in the garden. I was devastated when the project we were working on collapsed. We never fell out. Never had a cross word. I don’t really know to this day what went wrong, what made him change his mind.

But that is the nature of the world Sean had spent most of his working life in, the film business, where things are not always what they seem or go where they are intended to go.

Baring all for the life drawing class before Sean Connery hit the big time. The sketches were discovered by Hunter Davies who was idly flicking through a Christie’s auction catalogue in 2004

Ah well . . . at the time I was so pleased to be working with him, someone from a similar working-class Scottish background as myself, and from my own age group. Well, just about. He was born in 1930 and I in l936.

And so the sight of those nude sketches triggered memories of his early life and it was a life I could relate to. He’d left school at 14 in Edinburgh, had a variety of unskilled jobs: an undertaker’s assistant, a lifeguard at Portobello Baths, a milkman with a horse-drawn cart — then as a life model at Edinburgh Art College, earning 15 shillings an hour.

That day we studied the drawings carefully to see what he was wearing. He had a vague memory he had been given a posing pouch, but the 18-year-old art student had artfully disguised it, so he does appear to be totally naked.

After I had bought the drawings, I contacted the artist, Hilary Buchanan, in Edinburgh. She had gone on to be an art teacher and was very pleased I had bought her drawings, as the money was handy, now she had retired. I promised her I would show them to Sean and she agreed I could use them one day, if I ever wanted to.

It was some 50 years after he’d disrobed in her life class that she realised that the model that day was the young man who became Hollywood legend Sean Connery. She had been sorting through old drawing pads in her loft when she made the connection. She had not known his name and neither did she exchange as much as a single word with him. He was just one of the many life models she had drawn or painted during her four years at art college.

The global star had a variety of unskilled jobs: an undertaker’s assistant, a lifeguard at Portobello Baths, a milkman with a horse-drawn cart — then as a life model at Edinburgh Art College, earning 15 shillings an hour

But she did remember him, with his black hair and dark eyebrows and a rather spectacular body, who was admired by many of the other female art students at the time.

It was bodybuilding that lay behind the fabulous physique that proved to be Sean’s passport to success. In 1953 he went to London to enter a Mr Universe contest.

He didn’t win, but while there someone suggested that, with a body like his and his looks, he should apply to join the chorus of South Pacific, which was about to open at Drury Lane.

They wanted some hunky sailors to stand at the back and lift up the girls while they all sang There Is Nothing Like A Dame. And so his showbusiness career began. He toured with the company for 18 months. He started at the bottom of the cast list, listed simply as a ‘sailor’ before graduating to a very small speaking part as ‘Sgt Kenneth Johnston’.

Being a mad-keen collector at the time, of any old thing really, I actually tracked down many of these 1950s programmes, which saw him appear in South Pacific in places like Nottingham, Birmingham, Brighton and Manchester.

It was during the run of South Pacific that Sean decided he would like to be an actor. He paid for acting classes and managed to land little parts in plays and films, which eventually led to him securing the role of James Bond in the first Bond film, Dr No, in l962.

The drawings are by artist Hilary Buchanan, of Edinburgh who went on to be an art teacher and was very pleased to hear Hunter Davies had bought her drawings

I went to the premiere, as it happens, and thought it was a hoot — great fun and entertaining. Loved the theme tune. The action sequences. The cliffhangers. And loved Sean’s accent.

Spending all those weeks with him in 2004-2005, I was surprised how strong his Scottish accent still was in real life. I remember once interviewing Albert Finney, whose dad had been a Salford bookie. Finney had appeared in many slice-of-life Northern films, but in real life I was surprised to find he spoke actorly posh. He had, of course, been to a proper drama school, RADA, unlike Sean.

Sean was often mocked for his accent, imitated by amateur comedians, but he never seemed to change it, whether playing an American or an Irishman. Despite his years abroad and in Hollywood, it had stayed the same, never gone upmarket, which I rather liked.

His lush dark hair had of course long gone. But was he embarrassed to have lost it? Was he heck. If a film called for a wig, he wore one, but in normal life, he went around bald and proud, unlike many other celebs who scurried to the wig cupboard they moment they started thinning on top.

In fact, Sean did not seem to have any vanity. He did not consider he was handsome or a hunk.

Nor did he have any illusions about his acting talent. He knew he was limited, could not do accents. All he did on stage or in films was be himself, using his physical presence for impact.

It was his body that got him the part of James Bond.

When Hunter Davies went to stay with his friend Sean at his modest two-bed bungalow on a private gated estate on New Providence, the most populous island in the Bahamas, (pictured)  he took the pictures with him to surprise Sean

Not his naked body, as that was not revealed at the audition, but how he moved. The producers had caught sight of him through a window as he was walking down the street to the audition. It was the way he walked, held himself, looked so manly and confident, which had impressed them. They didn’t worry about his accent, lack of education or working-class background, though Ian Fleming — the Bond author — very much did. He considered Sean an overgrown stunt man.

What Sean did possess, though, was a high regard for his own political thoughts and views. He did occasionally get pretty boring when he got on to the Scottish National Party — what they should do, how important they were, how vital it was they should have power and Scotland have independence.

For years he contributed a great deal of money to the SNP, long before they had any power.

It was a paradox he either ignored or denied — that here he was, an exile in the Bahamas, yet so passionate about Scotland. In his mind, he was going to go back some time. And he did, often.

He could be tough physically, and mentally, becoming angry if he thought he had been wronged in any way and some of his reported views on women were pretty unacceptable and upset many fans.

But he did have a sensitive side. He wrote poems and stories, going back to his youth and early days, when, for example, he fell in love with his favourite horse which pulled his milk cart.

These poems and touching stories would surprise Bond fans, if they were ever published.

If perhaps there is ever a proper biography of him, which surely will come one day …