2,500-year-old intact and sealed coffins are discovered in Giza, Egypt

An Egyptian archaeological mission has discovered a large collection of 2,500-year-old sealed sarcophagi and figurines at the Saqqara Necropolis in Giza.

Opening one of the ornately decorated sarcophagi for the first time before assembled media, the team revealed mummified remains wrapped in burial cloth that bore hieroglyphic inscriptions in bright colours.

The dramatic find was unearthed south of Cairo in the sprawling burial ground of Saqqara, the necropolis of the ancient Egyptian capital of Memphis, a UNESCO World Heritage site.

On the site – around 10 miles south-east of the Pyramids of Giza – 59 anthropoid painted coffins have been discovered so far. Around 40 were displayed to the press.

The majority of coffins housed mummified remains which initial research suggests would have been priests, top officials and elites in ancient Egyptian society.

All of whom would have likely been subject to ancient Egypt’s complex burial rituals after they died, including having their brains removed with an iron hook. 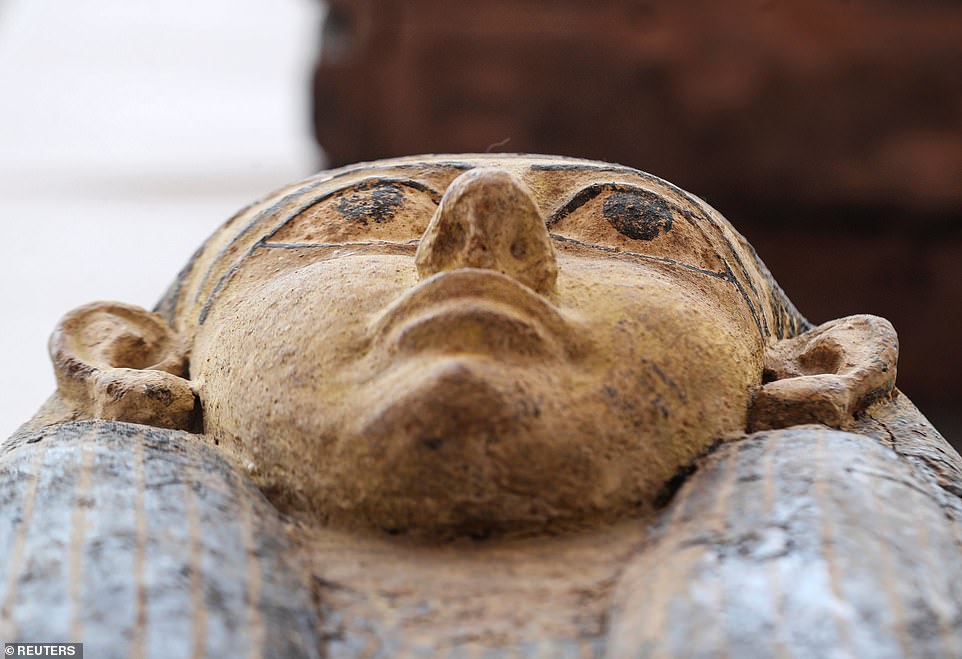 A sarcophagus that is around 2500 years old is seen inside the newly discovered burial site near Egypt’s Saqqara necropolis, in Giza, Egypt, October 3 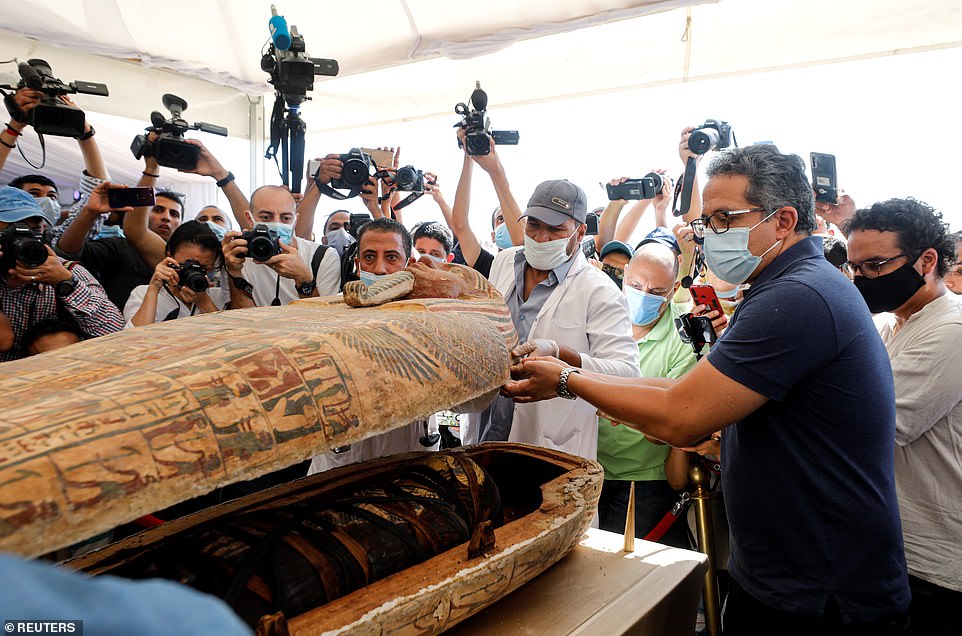 Pictured: A man opens one of the sarcophagi during the unveiling event in front of the media. 59 anthropoid painted coffins have been discovered so far 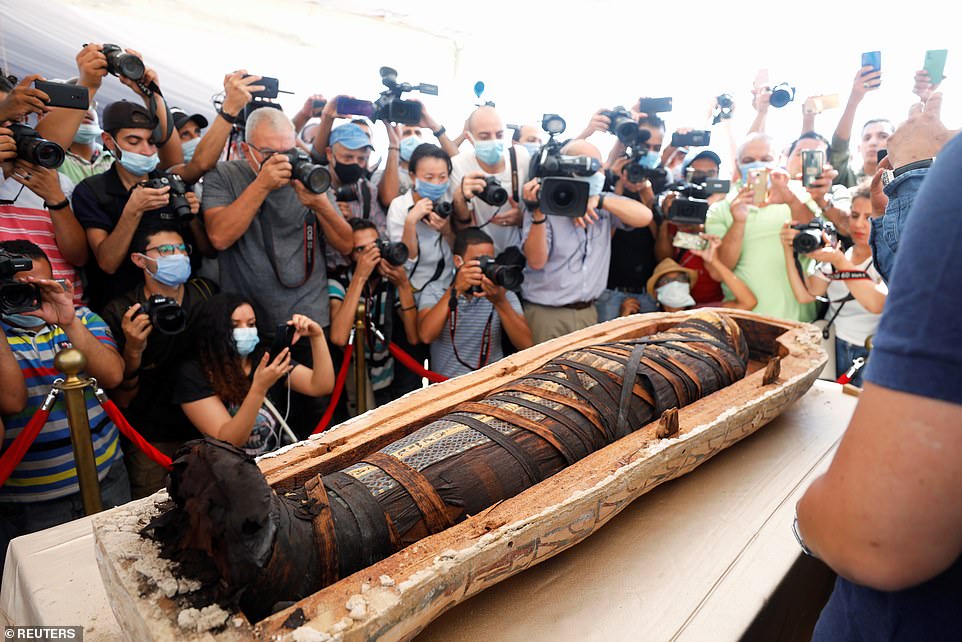 The majority of the coffins found so far have contained mummified remains (pictured) of priests, top officials and elites 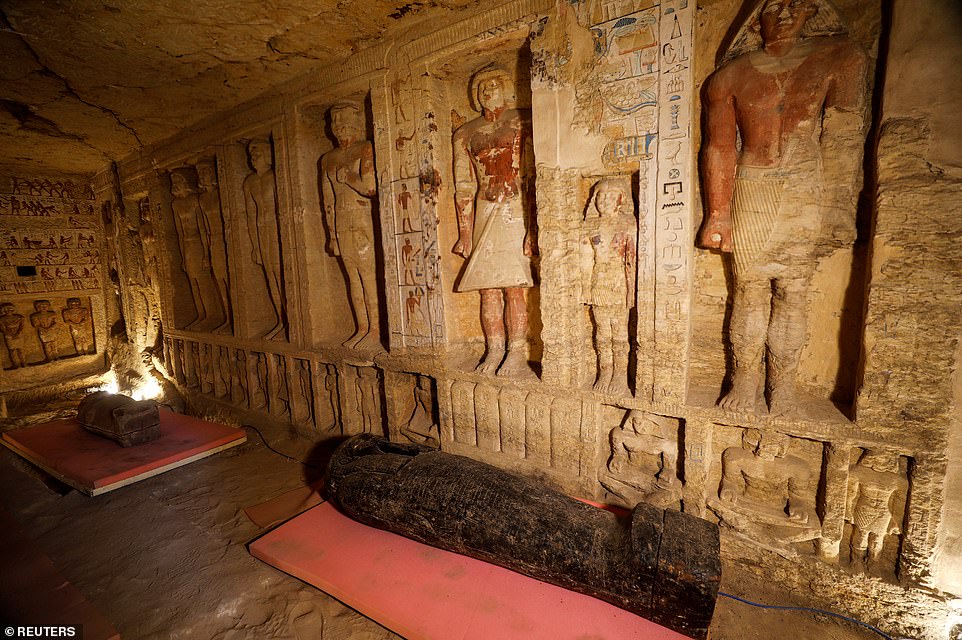 Around 40 of the 59 coffins discovered at the site near Egypt’s Saqqara necropolis were put on display to the media, with the others being stored ahead of being displayed in a museum 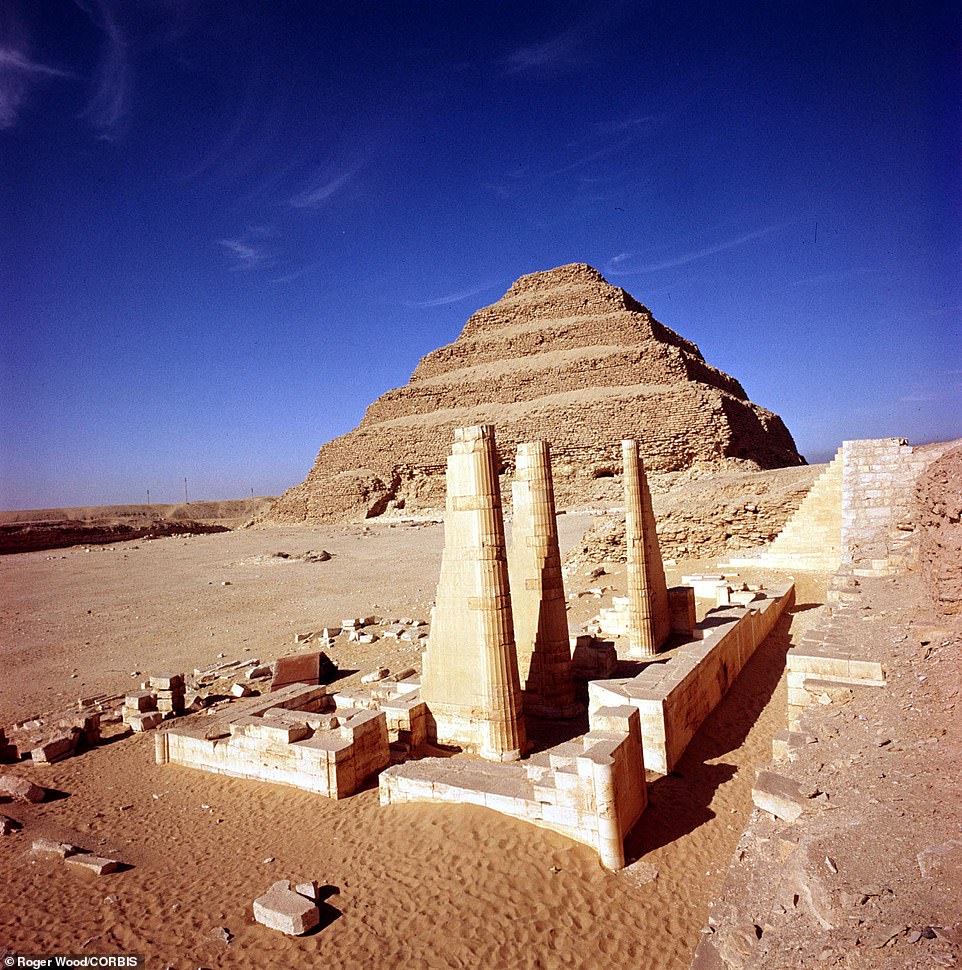 The dramatic find was unearthed south of Cairo in the sprawling burial ground of Saqqarah, the necropolis of the ancient Egyptian capital of Memphis, a UNESCO World Heritage site

The discovery was announced on Friday by Egypt’s Minister of Antiquities and Tourism, Dr. Khaled El-Enany.

‘Today I can say most of the discoveries have been made by Egyptian teams on Egyptian soil. This is something I am immensely proud of,’ El-Enany said.

He said the mission had started re-excavating the site two months ago, and uncovered a burial shaft 36 feet deep. Inside, they found 13 intact coffins. 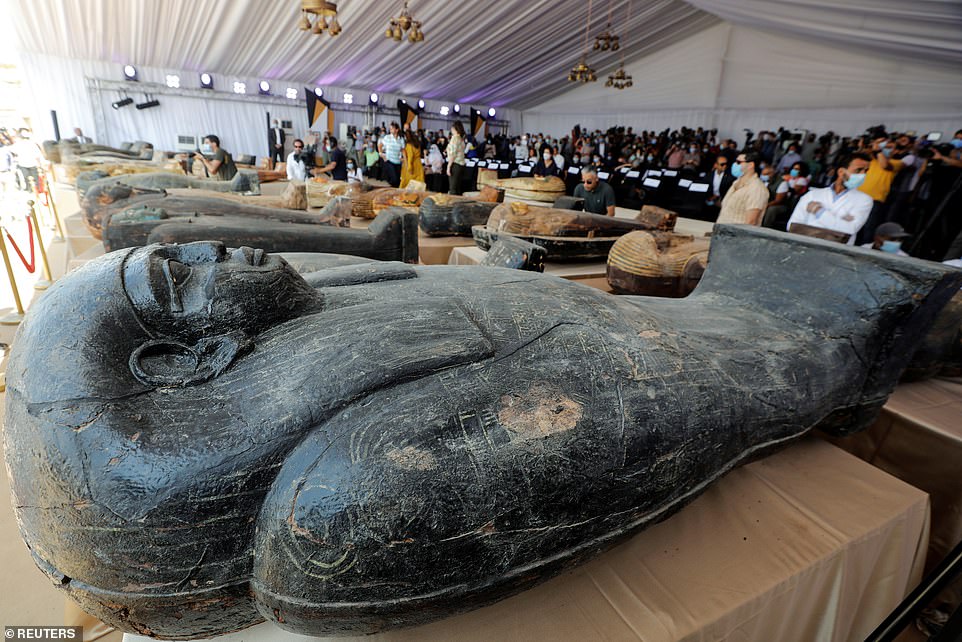 The mission to excavate the site started around two months ago, Egypt’s Minister of Antiquities and Tourism, Dr. Khaled El-Enany said 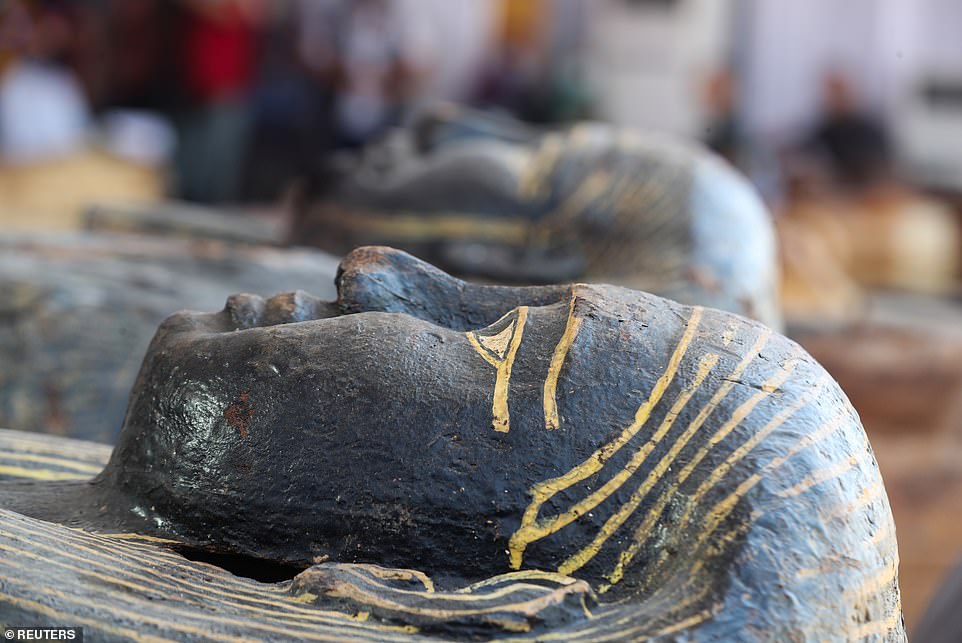 The team of archaeologists first found a burial tunnel around 36 feet deep. Inside, they discovered 13 intact coffins 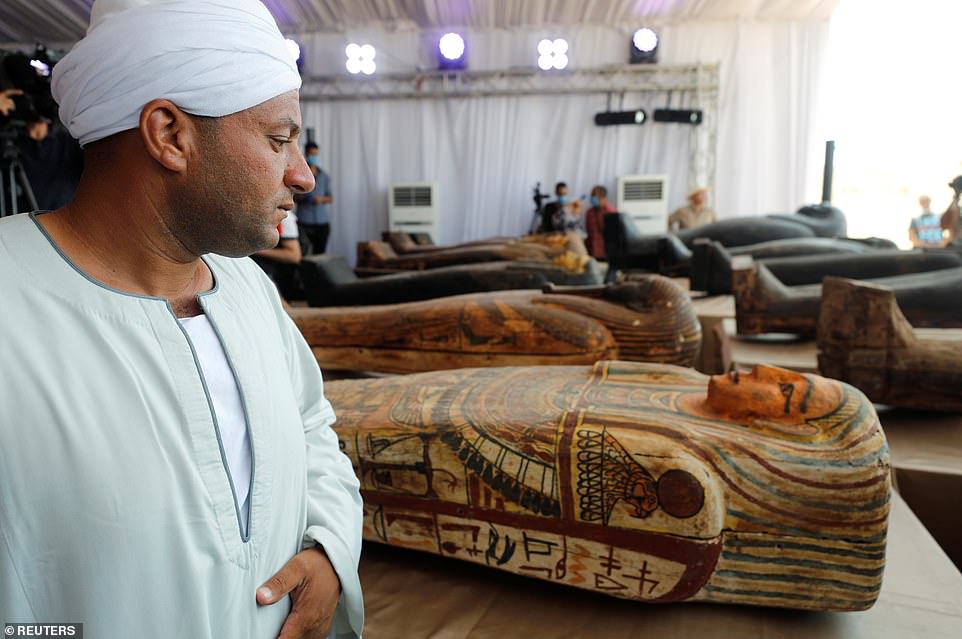 From there, they discovered two more tunnels, also both filled with coffins. In total they have discovered 59 so far 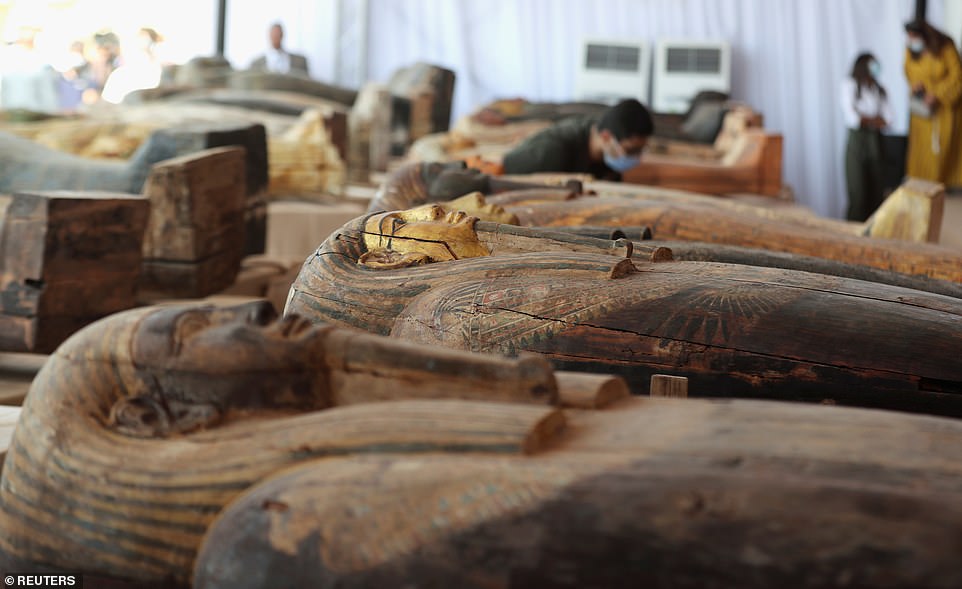 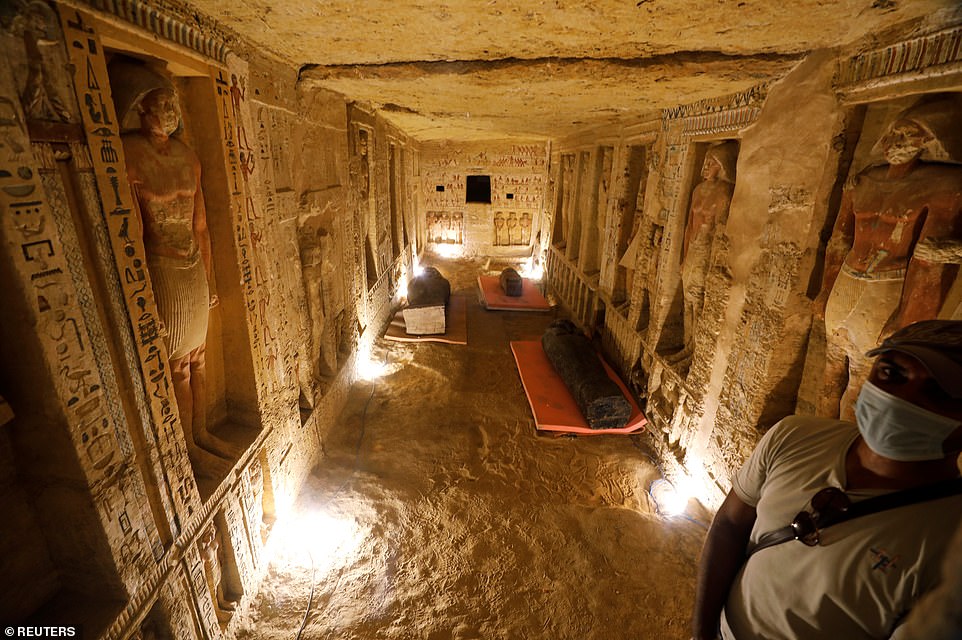 Since the find of the first 13 coffins was announced almost three weeks ago, more have been discovered in shafts at depths of up to 40 feet 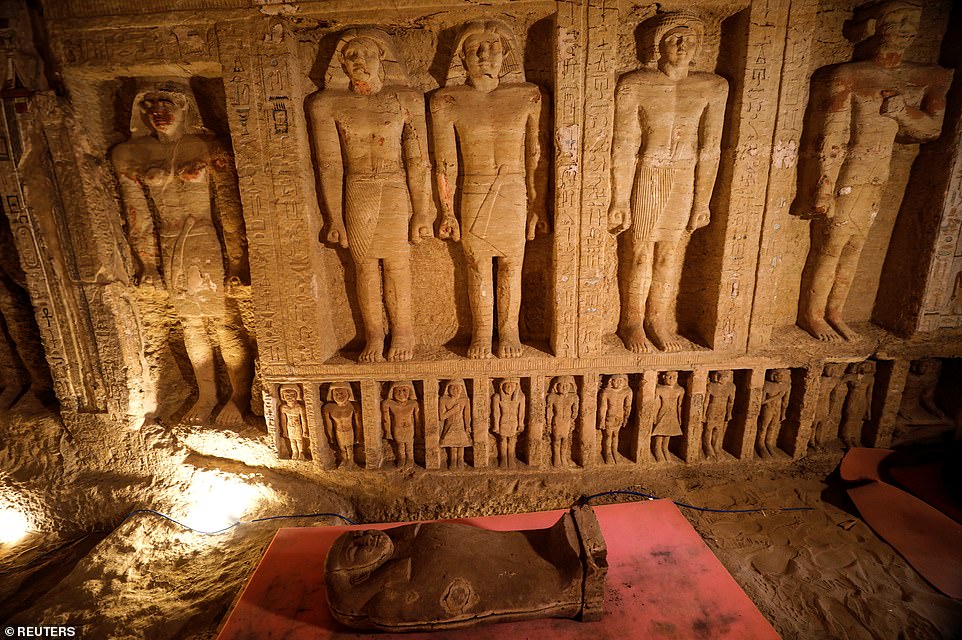 The coffins, sealed more than 2,500 years ago, date back to the Late Period of ancient Egypt, from about the sixth or seventh century BC

Over thousands of years, ancient Egyptians developed elaborate and complex funerary practices that they believed were necessary to enter the afterlife.

The processes evolved over time, but many elements remained consistent through different ancient Egyptian dynasties.

The most classic form of mummification dates back to the 18th Dynasty that spanned the the period from 1549/1550 to 1292 BC.

First, the brain was removed. Some say this was by a metal hook inserted through the nose, while others say it was with a rod through the cranium which was used to liquefy the brain.

The brain would have then been drained out through the nose before the skull was filled with a mixture of tree resin and fragrances.

This stopped the decomposition of any residual brain tissue, and also suppressed the smell.

Then, the lumbar area was sliced open and the organs of the abdomen were removed. The heat was usually left. These were then heavily salted and placed in canopic jars.

The now-empty chest cavity was then filled with a mixture of aromatics.

All incisions into the body were then filled with a salt called natron which disinfected wounds.

The body was then put on a bed of natron for a period of between 35 and 70 days.

At the end of this period, the now dehydrated corpse was washed, oiled and covered with resin as adhesive.

The body was then wrapped in linen until it was fully covered.

Depending on the social status of the deceased, the mummy was sometimes then adorned with decorations, such as a mask or a shroud.

The mummy was then buried in a tomb, ready for the afterlife.

All the coffins discovered so far are in good condition and bear their original colours.

‘My colleagues in the Supreme Council of Antiquities discovered burial shafts filled with wooden, sealed and intact coffins,’ El-Enany said.

‘I am really impressed that Covid-19 did not stop them from digging to unveil more mystery and secrets about our great civilisation.’

The minister said that the coffins would be transported to the Grand Egyptian Museum to be displayed to the public.

There are mummies in the majority of the coffins.

In addition to the coffins, a carved bronze statue of the god Nefertum, inlaid with precious stones, was discovered, as was a collection of 28 statues of Ptah-Soker, the main god of Saqqara Necropolis.

Collections of amulets and a ushabti figurine were also found.

The Saqqara necropolis is found south of Cairo and is part of the ancient capital city of Memphis. It is also the site of the colossal rectangular-based step Pyramid of Djoser.

Work continues to be carried out to try and work out the exact history of the sarcophagi.

Egypt uses archaeological discoveries as a means to promote tourism, a sector which has been directly affected by travel restrictions put in place in response to the coronavirus pandemic.

‘We are very happy about this discovery,’ said Mostafa Waziri, secretary general of the Supreme Council of Antiquities.

An unknown number of additional coffins may still lie buried there, the tourism and antiquities minister, Khaled al-Anani, said at the site, near the 4,700-year-old pyramid of Djoser.

‘So today is not the end of the discovery, I consider it the beginning of the big discovery,’ he said.

The coffins, sealed more than 2,500 years ago, date back to the Late Period of ancient Egypt, from about the sixth or seventh century BC, the minister added.

Excavations in Saqqara have in recent years unearthed troves of artefacts as well as mummified snakes, birds, scarab beetles and other animals.

The discovery of the coffins is the first major announcement since the outbreak of Covid-19 in Egypt, which led to the closure of museums and archaeological sites for around three months from late March. 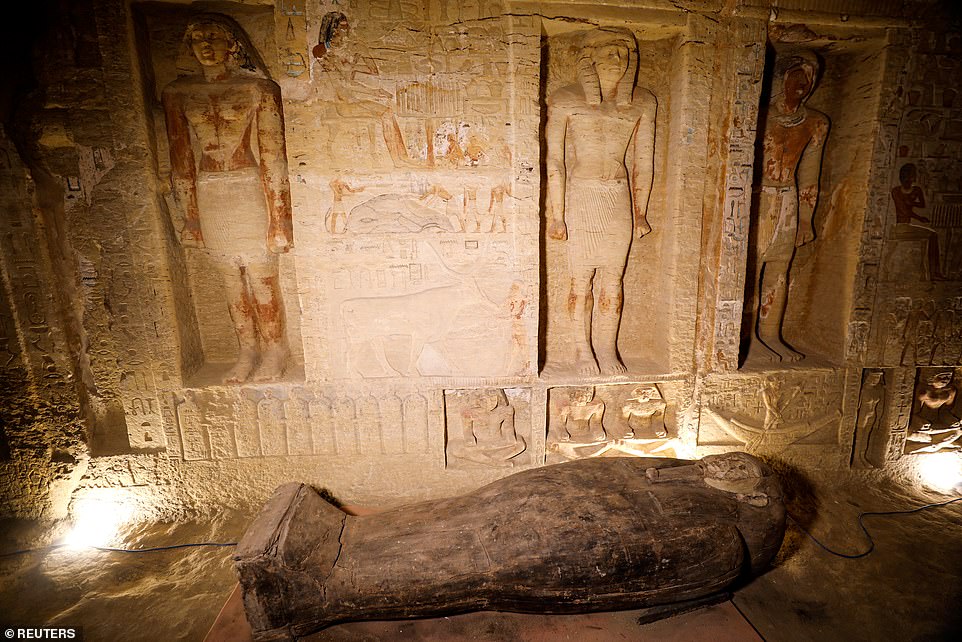 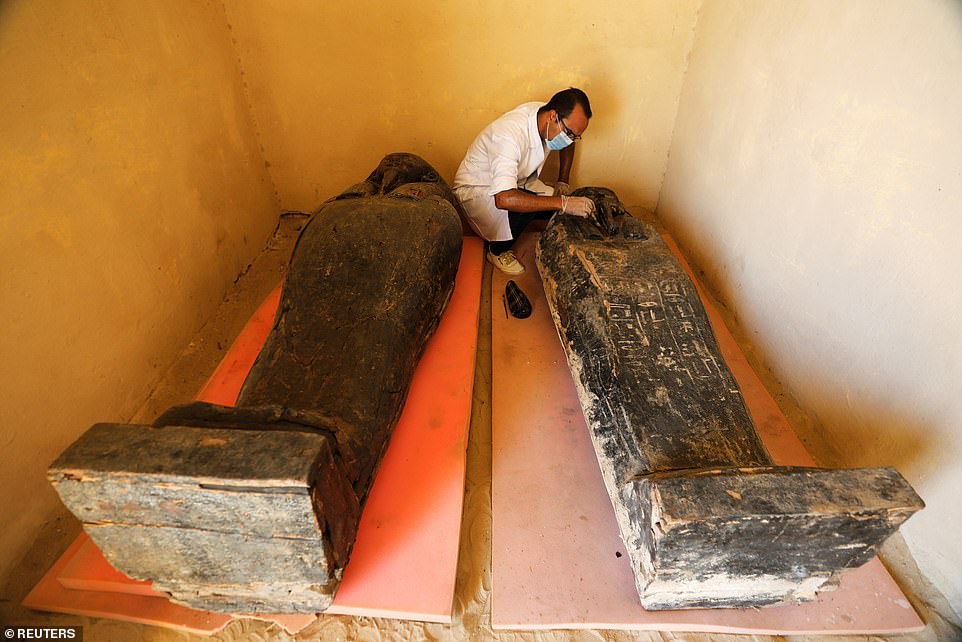 Excavations in Saqqara have in recent years unearthed troves of artefacts as well as mummified snakes, birds, scarab beetles and other animals 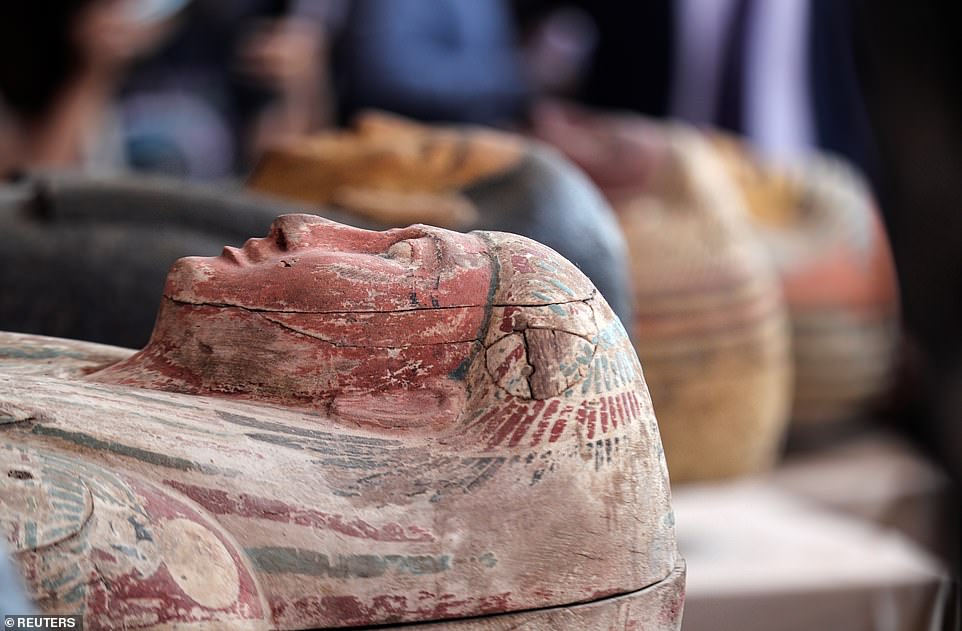 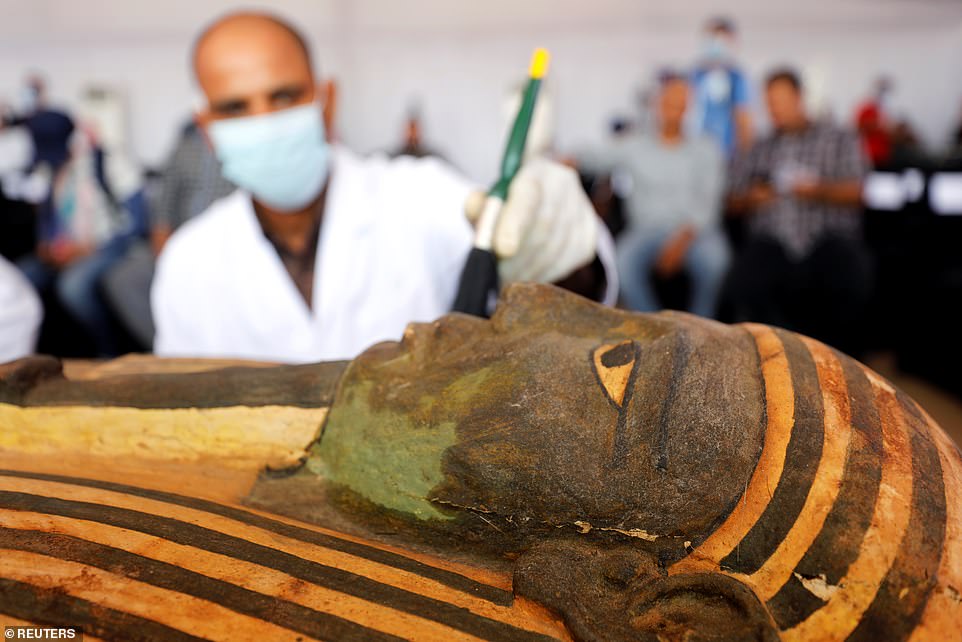 Save on cookware, small appliances and more