31,000 fans asked for tickets for the Barcelona match against Bayern Munich in the Champions League 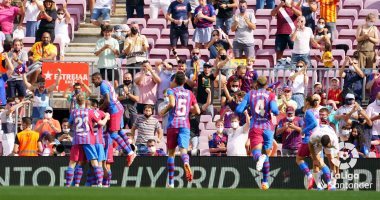 Press reports revealed that more than 31,000 fans requested tickets to attend the Barcelona match against Bayern Munich in the first round of the Champions League group stage..

The Spanish newspaper “Mundo Deportivo” reported that FC Barcelona reported that there were 31,213 participants who requested a ticket for the Bayern Munich match and stressed that the process of distributing the sites in the different regions will determine whether a tie will be necessary.

The newspaper added that the allowed capacity is 40,000 spectators, so the number of requests does not exceed the capacity that has been enabled, as FC Barcelona reported today that 31,213 participants had requested to enter the Camp Nou during the Barcelona-Bayern match on Tuesday 14 September.

Barcelona stressed that the process of distributing the sites in the different regions will determine whether a tie will be necessary.

The newspaper indicated that the Camp Nou stadium is able to host about 40,000 people in the Barcelona match against Bayern after the new measures that decided to ease some restrictions, and that facilities with a capacity of more than 10,000 people may open up to 40%, according to the package of measures announced by the government. Which will take effect from Friday.

The 31,213 requests do not exceed those of 40,000 places enabled, so in principle a withdrawal shouldn’t be necessary and all registrants should have a ticket, but the club’s final contact should be seen since it was warned, Option to make the said lottery.

Ethereum Prepares itself For Eco-Friendly world: $10k Is Imminent 2021