A cheeky smile and rather more full head of hair – so do YOU know which politician this is? 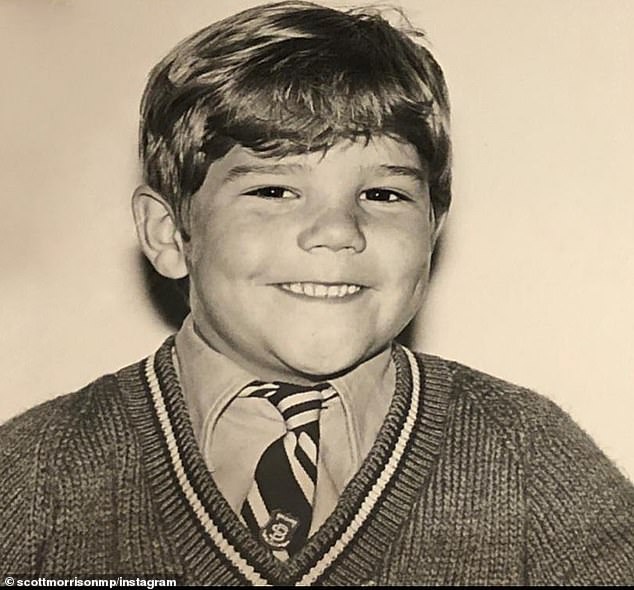 
A cheeky smile, a smartly knotted tie and a VERY full head of hair – so do you recognise this primary school politician?

With a full head of hair, chubby cheeks and a toothy smile, he looks like any young boy proudly starting school.

Prime Minister Scott Morrison posted this ‘Throwback Thursday’ photo of himself in primary school on social media to coincide with students around the nation returning to classrooms this week.

Sporting a cheeky grin and impressive dimples, the photo shows Morrison, who is now 52, about to start Year 5 at Clovelly Public School in Sydney’s eastern suburbs.

Scott Morrison’s social media post (pictured above) which was shared over 13,000 times

Morrison said that the coronavirus pandemic meant 2020 was ‘a really tough year’ for many children, marred by ‘interruption and uncertainty.’

He then wished students heading into Year 12 and their final year of school good luck, with the hope 2021 will be a ‘better year.’

‘Lots of kids will be heading back to school this week, and some will be starting for the first time,’ the social media post read.

‘Wishing them all (and their mums and dads) a happy first day.

‘2020 was a really tough year for our children with Covid-19 causing lots of interruption and uncertainty.

‘We still face many more challenges this year but here’s hoping 2021 will be a better year.

‘Good luck also to all those students heading into Year 12 and their final year of school.’

He became Liberal leader in August 2018 and then went on to win the 2019 federal election, making him Australia’s 30th prime minister.

NSW Premier Gladys Berejiklian speaks to the media during a press conference in Sydney, Monday, April 20, 2020

Mr Morrison grew up in Sydney’s Randwick and went on to marry his wife Jenny in 1990, with whom he shares two daughters – Lily and Abbey.

Gladys Berejiklian left her Twitter followers stunned after she shared an image of herself dressed as Supergirl.

The New South Wales Premier posed in the superhero outfit wearing a blonde wig and cape at her 21st birthday party.

‘Embarrassing I know, but this is from my 21st (nearly 20),’ Ms Berejiklian wrote.

Queensland Premier Annastacia Palaszczuk has also joined in on the act.

The Queensland leader posted a youthful photo of herself last year showing her relaxing on a palm-tree laden beach looking carefree – a far cry from her current high-stress job in the rough-and-tumble world of state politics.

Queensland Premier Annastacia Palaszczuk speaks during a press conference at Parliament House in Brisbane on April 8, 2020