In the past few days, Baghdad witnessed a series of attacks against the headquarters of Sunni and Kurdish parties and interests that did not cause casualties, and no party claimed responsibility for them. Politicians and analysts see them as worrisome “political messages”, especially as they come in the context of disputes over the next government.

In a country where, since the US invasion of the country and the overthrow of Saddam Hussein’s regime in 2003, the system of quotas between the influential political forces has been relied on, these bombings do not depart from the context of the violence that followed the early parliamentary elections that took place on the tenth of last October, in light of Tension resulting from disagreements over the formation of a new government, especially between Shiite components, the Sadrist movement led by Muqtada al-Sadr on the one hand, and what is known as the coordinating framework that includes other prominent Shiite forces, according to analysts.

Two explosions with two sound bombs – late on Sunday night – rocked Baghdad, injuring two people, and the Iraqi security authorities said that they targeted two banks owned by businessmen close to Kurdish politicians in the center of the Iraqi capital.

Prior to that, the house of a deputy in the Sunni “Progress” alliance led by the Speaker of Parliament elected for a second term, Muhammad al-Halbousi, was targeted by a sound bomb explosion, and was preceded by two targeting on the same night of the headquarters of the “Progress” and “Azm” alliance led by Khamis al-Khanjar, the Sunnis. These attacks were preceded by a sound bomb attack on the headquarters of the Kurdistan Democratic Party in Baghdad, according to local media.

The head of the Center for Political Thinking and Iraqi political analyst Ihsan Al-Shammari believes that these “attacks are part of political pressure,” adding, “they are bombings with political messages,” but they are also “punitive bombings of the forces that participated with the leader of the Sadrist bloc, Muqtada al-Sadr, to form a majority in Parliament.”

The security investigations did not reveal who carried out these attacks, but a security source put it in the same political context. “The attacks that took place on Sunday and before it carry political messages from the losing parties in the elections to disrupt the formation of the government,” he said. 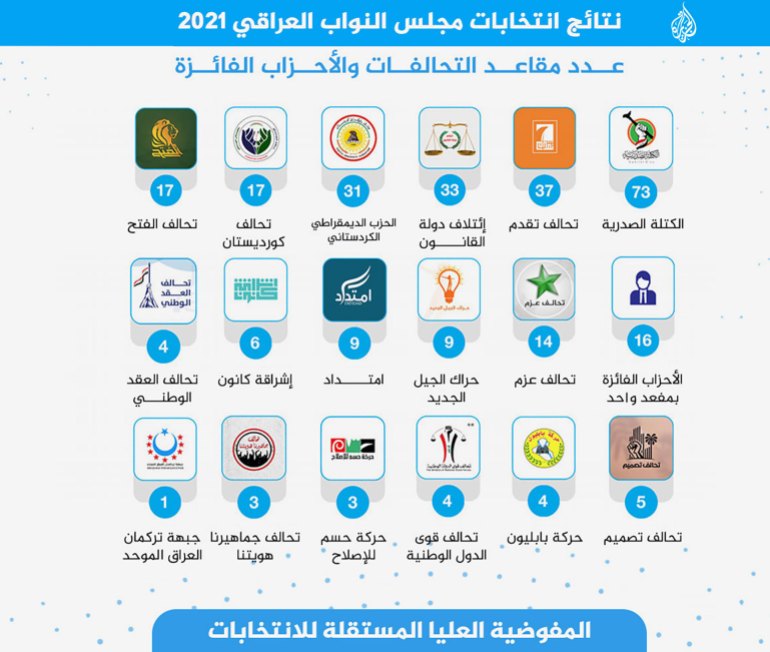 While the Sadrist bloc won the largest number of parliament seats (73 seats out of a total of 329), the coordination framework says that it was able to form the largest bloc of 88 deputies through alliances that make it the first to nominate a prime minister.

This announcement led to arguments in the first session of Parliament on the ninth of this January, with each party asserting that it owns the largest parliamentary bloc. The session stopped for about an hour, and when it resumed, it was boycotted by the coordinating framework forces today, Tuesday, on the pretext that its course was not constitutional.

Muhammad al-Halbousi, leader of the “Progress” coalition (37 seats), was elected speaker of parliament, with two vice presidents, one from the Kurdistan Democratic Party led by Massoud Barzani and the other from the Sadrist bloc.

This formation reflects the alliance between al-Sadr, the Sunni forces and Barzani’s party, and paves the way for the formation of a majority government that al-Sadr is still insisting on.

Since the results of the parliamentary elections were issued 3 months ago, the forces affiliated with the “Al-Fatah” alliance led by Hadi Al-Amiri – whose parliamentary share has declined from 48 deputies in the previous parliament to 17 in the new parliament – have categorically rejected the election results, condemned their “forgery”, and organized Demonstrations in the fortified Green Zone in central Baghdad, where government and diplomatic headquarters are located, amounted to an attempt to storm it.

Heib Hegel, a researcher at the International Crisis Group, believes that “the concern is that the Shiite coordination forces are trying to promote the idea that everything that is happening now is a conspiracy to cause sedition within the Shiite house, and this is a disturbing discourse, because they do not acknowledge their defeat in the elections, but rather call for violence.”

While the Federal Supreme Court is expected to hear, tomorrow, Wednesday, a case challenging the constitutionality of the first session, attempts continue on the political front to “bridging the gap” in the Shiite house.

This was evident in a meeting that included al-Sadr and Hadi al-Amiri, the leader of the “Al-Fateh” alliance and the “Badr” faction affiliated with the Popular Mobilization, following which a statement was issued by the coordination framework in which he stressed his determination to “continue the dialogue with the political forces to reach a solution that will bring the country out of the dangerous juncture it is going through.” “.

Hegel sees this as an attempt by al-Sadr “to rapprochement with al-Amiri, while marginalizing other forces within the coordination framework with which he has a dispute, especially Qais al-Khazali, the leader of the Asa’ib Ahl al-Haq faction (which is affiliated with the crowd), and the former prime minister and leader of the State of Law coalition, Nuri al-Maliki.”

She added, “Iran certainly does not prefer this scenario, but it may accept it…especially if it includes enough Shiite forces, especially some of the Popular Mobilization factions.” This scenario will lead to “a harsh campaign to discredit the next government and put obstacles in front of it” from the excluded forces.

This coincides with an unannounced visit by Ismail Qaani, commander of the Quds Force in the Iranian Revolutionary Guards, to Najaf on Sunday, local media reported.
Al-Shammari sees this visit as an attempt to “bridging the gap between the Shiite forces to prevent further deterioration and slipping into limited fighting.”

Hegel considers that the continuation of violence and “messages” is very likely, with the “exclusion of open war” between Shiite forces.

MATIC Price To Drop Below $2 ! Was This the End of the Polygon Bull Run? – Coinpedia – Fintech & Cryptocurreny News Media 2021

Exxon commits to carbon neutrality of its operations by 2050

Exxon commits to carbon neutrality of its operations by 2050