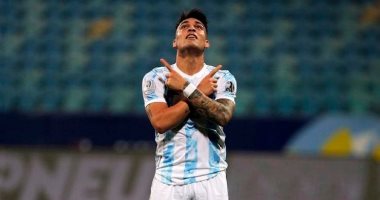 Argentina beat its host Venezuela, 1-0, at the end of the first half of the meeting between the two teams, at the Olympic Stadium in the capital, Caracas, as part of the ninth round of South American qualifiers for the 2022 World Cup.

Venezuela defender Luis Martinez was subjected to a direct expulsion in the 32nd minute, after violently entering the Argentine star Lionel Messi.

Brazil leads the qualifiers table, which includes 10 teams with 18 points, from winning all the previous six matches, 6 points ahead of Argentina, who is in third place, equal with Ecuador, runner-up, on goal difference, while Venezuela is in ninth and penultimate place with 4 points.

The Argentine national team included Lionel Messi, the newly joined Paris Saint-Germain team, after the expiry of his contract with Barcelona, ​​and he played his first match with the French team against Stade Reims last Sunday.

The Tango team list witnessed the coach summoning 30 players to the list, led by Messi and Di Maria. Paulo Dybala also returned to the Tango ranks after an absence of a year and 9 months since his last joining with his country.

As for the Venezuelan national team, the former coach of Al-Ahly club, Jose Peseiro, left his coaching several days ago, after the coach requested the termination of his contract with the Venezuelan Federation, to leave his position after a year and 6 months he spent as coach of the team.

The Argentina national team started the match with the following formation:

Facts About Vitamins And Supplements You Should Know