Guitar virtuoso Eddie Van Halen, who died Tuesday at 65, was an icon for his performances onstage, but his and his band’s antics backstage were epic.

‘Drink a bottle of booze, pop a couple ‘ludes, smoke a joint or two (or ten) and see where the night takes you,’ was the band’s motto, according to their former manager’s 2017 memoir. (The ‘ludes refers to quaaludes.)

In the 1980s, there was the supposed filming of sex backstage with women, who did anything to get close to the group during their heyday. An argument between Van Halen and singer David Lee Roth, whose relationship was acrimonious, involved flung guacamole and a bowl of peanuts, according to the book. The time a man won an MTV contest to party with the band in 1984 that included lobster, filet mignon, champagne, cocaine and a woman getting naked to dance with him, the New York Post reported.

Onstage, Van Halen kept lines of coke near an amplifier and had a drug dealer on call who would meet him anywhere to supply him blow, chronicled in Noel Monk’s 2017 book, Runnin’ with the Devil.

After a woman claimed Van Halen was the father of his child and sued him, he reportedly told Monk: ‘You know how I like a pretty face in my crotch.’ Turned out Van Halen wasn’t the father but Roth took it heart, claiming he need ‘paternity insurance’ to protect him from groupies, Monk wrote.

That was the 1980s. In 2001, Van Halen pulled a gun on Limp Bizkit frontman Fred Durst at his house over equipment, claimed the book, Eruption in the Canyon: 212 Days & Nights With the Genius.

And then there was his marriage to Valerie Bertinelli. 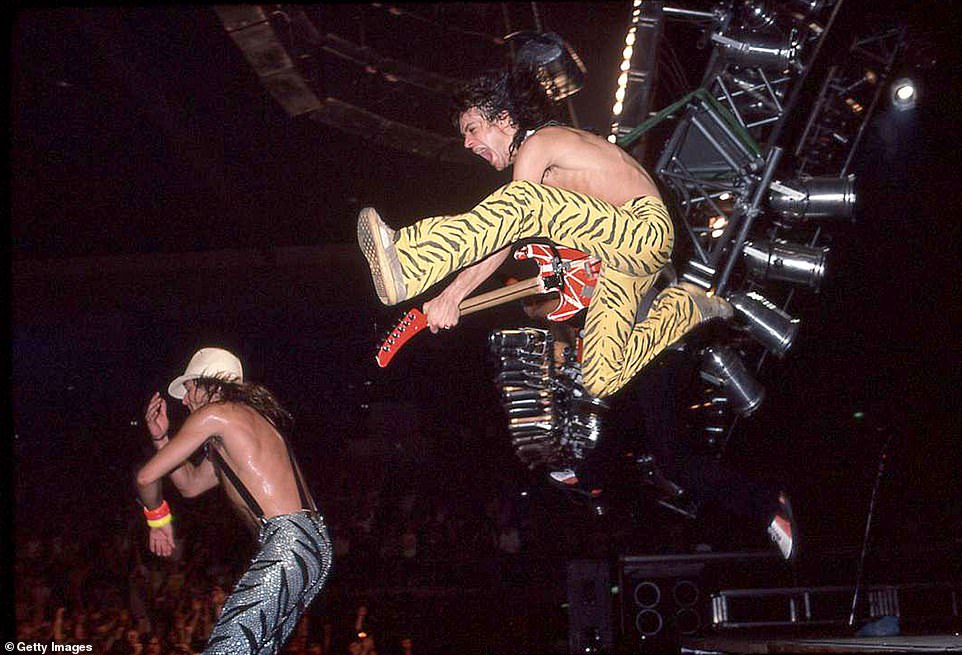 Eddie Van Halen, who died Tuesday at the age of 65 from cancer, was known for his energy and kicks while playing guitar and is seen above performing with frontman David Lee Roth on May 21, 1984 in San Diego, California. The guitar virtuoso kept lines of coke near an amplifier and had a drug dealer on call who would meet him anywhere to supply him blow, according to his former manager’s 2017 book, Runnin’ with the Devil 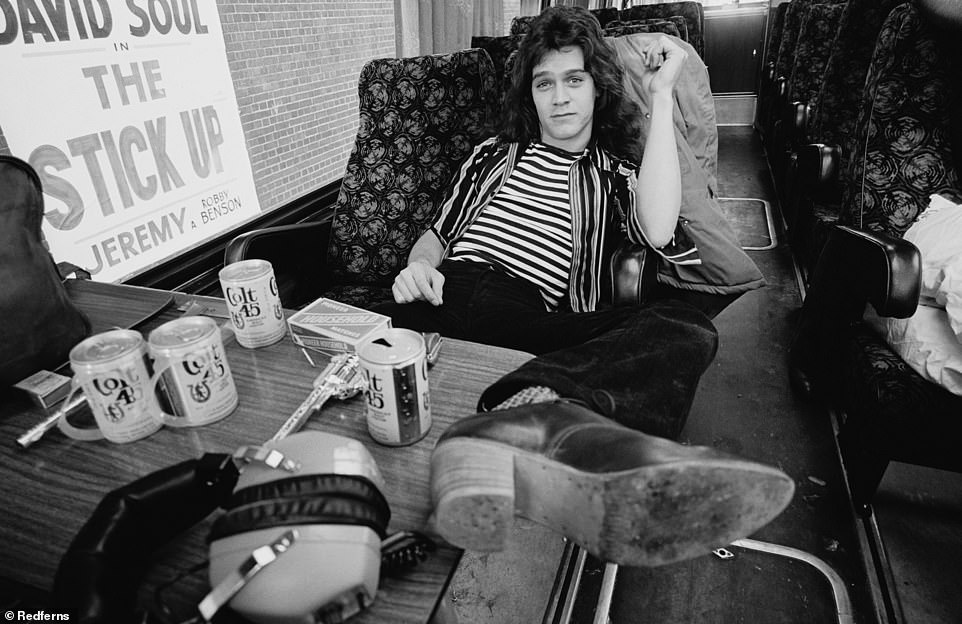 Van Halen formed the band with his brother, Alex, who played drums, singer David Lee Roth and bassist Michael Anthony in the 1970s. In 1978, the band’s self-titled album was released and by the 1980s, they were stars that sold out arenas. Above, Van Halen with cans of beer and a replica hand gun on the tour bus in London in May 1978 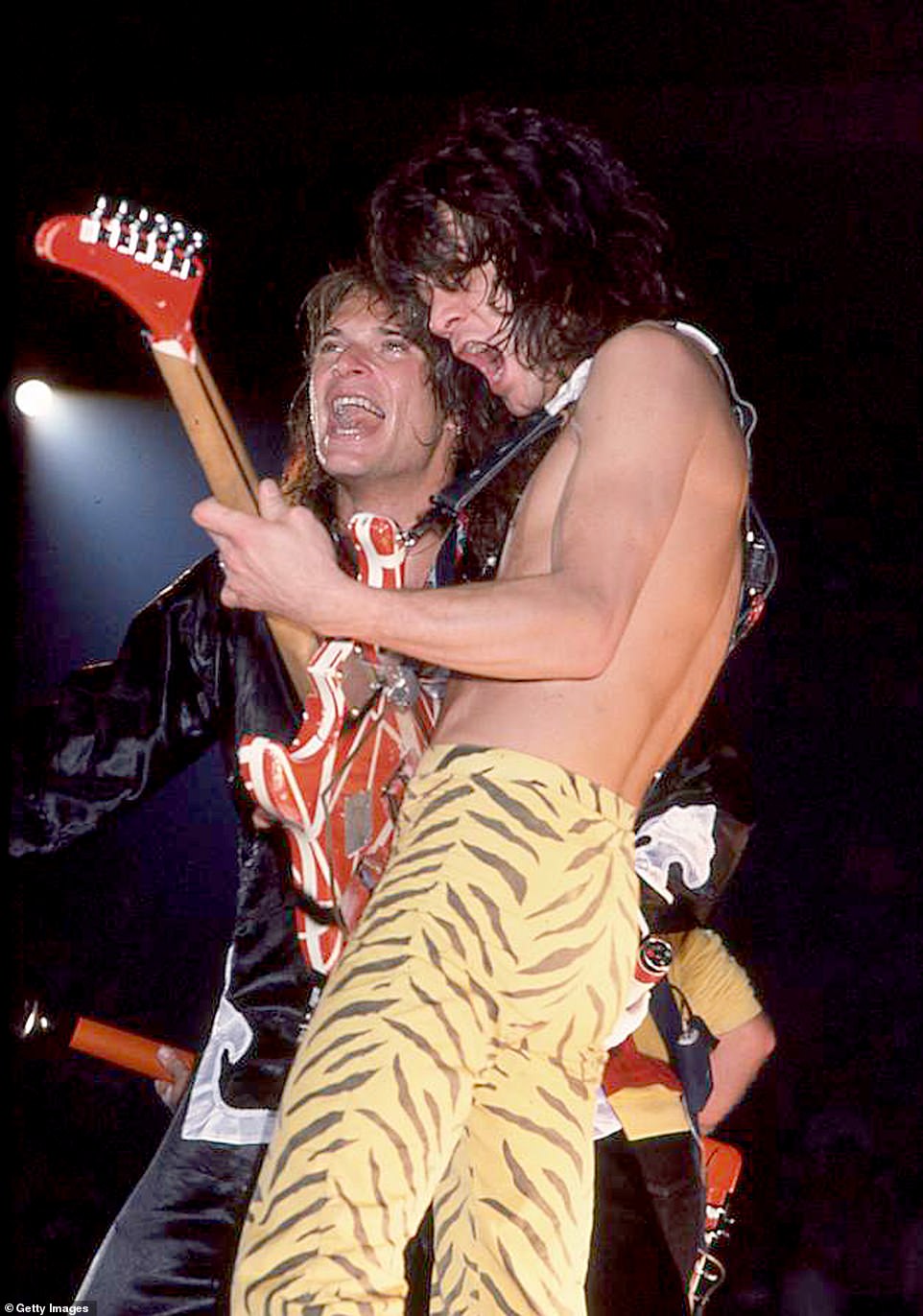 To say the band was huge in the 1980s is an understatement. Propelled by the antics of frontman David Lee Roth and hits like Jump, Panama, and Hot for Teacher, the world was at the group’s feet. And while Roth was ostentatious, guitarist Eddie Van Halen helped to create the band’s singular sound. Above, Roth, left, and Van Halen, right, performing in 1984. They had an acrimonious relationship and Roth would leave the band in 1985. Sammy Hagar replaced him as lead vocalist

‘Into this vortex of sex, drugs, and rock ‘n’ roll walked Valerie Bertinelli. She could not possibly have known what she was getting into; then again, I suppose the same could be said of Edward,’ Monk wrote.

Bertinelli was star on the sitcom, One Day at a Time, and had been dubbed ‘America’s Sweetheart.’ The couple married not long after they met backstage at one of the band’s performances.

On their wedding day, April 11, 1981, the 21-year-old bride spent part of the celebration, ‘holding her husband’s head over a toilet bowl, pulling his hair back to make sure it didn’t become encrusted with puke.’ Van Halen, then 25, vowed to do better but that didn’t happen, according to Runnin’ with the Devil.

Contrary to her public image, Bertinelli was also using cocaine at one point and that it helped to control her weight, saying: ‘Ed likes me skinny.’ There were plenty of women in the band’s orbit, and Monk wrote that they gave blow jobs to members of crew to get close to the band.

Van Halen cheated on her frequently, and according to Runnin’ with the Devil, made her stay in a separate room so he could play his guitar and do drugs. Some nights he ended up with Monk, acting like a child and ‘suckling vodka instead of milk,’ according to the book.

During the band’s successful 1984 tour, Roth decided to leave and strike out on his own. Van Halen told Monk that the ostentatious Roth drove him nuts.

Sammy Hagar replaced Roth as frontman, and before Van Halen became sober in 2008, he showed up at the vocalist’s house, inebriated and asking him to write a song at 2:30am in the morning.

Van Halen cheated on Bertinelli frequently but they stayed together for over 20 years before divorcing in 2007. Together, they had a son, Wolfgang, in 1990. Van Halen married Janie Liszewski in 2009. Bertinelli and Van Halen remained close and she, his wife Janie were by his side when he died.

Van Halen told Billboard in 2015: ‘I didn’t drink to party. Alcohol and cocaine were private things to me. I would use them for work. The blow keeps you awake and the alcohol lowers your inhibitions. I’m sure there were musical things I would not have attempted were I not in that mental state. You just play by yourself with a tape running, and after about an hour, your mind goes to a place where you’re not thinking about anything.’ 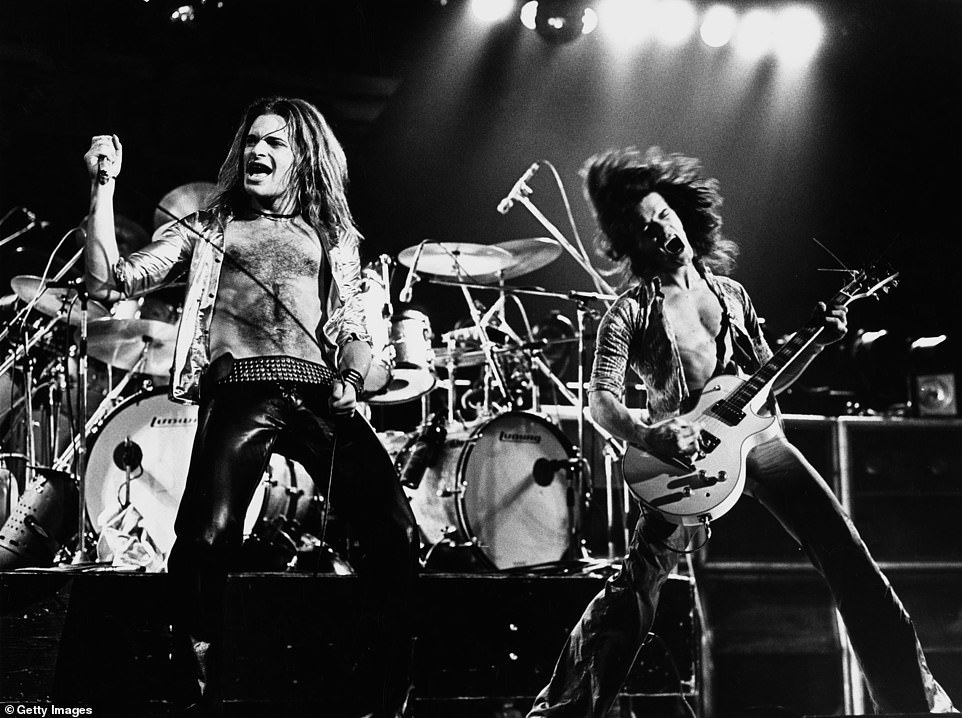 Above, David Lee Roth and Eddie Van Halen performing in 1978 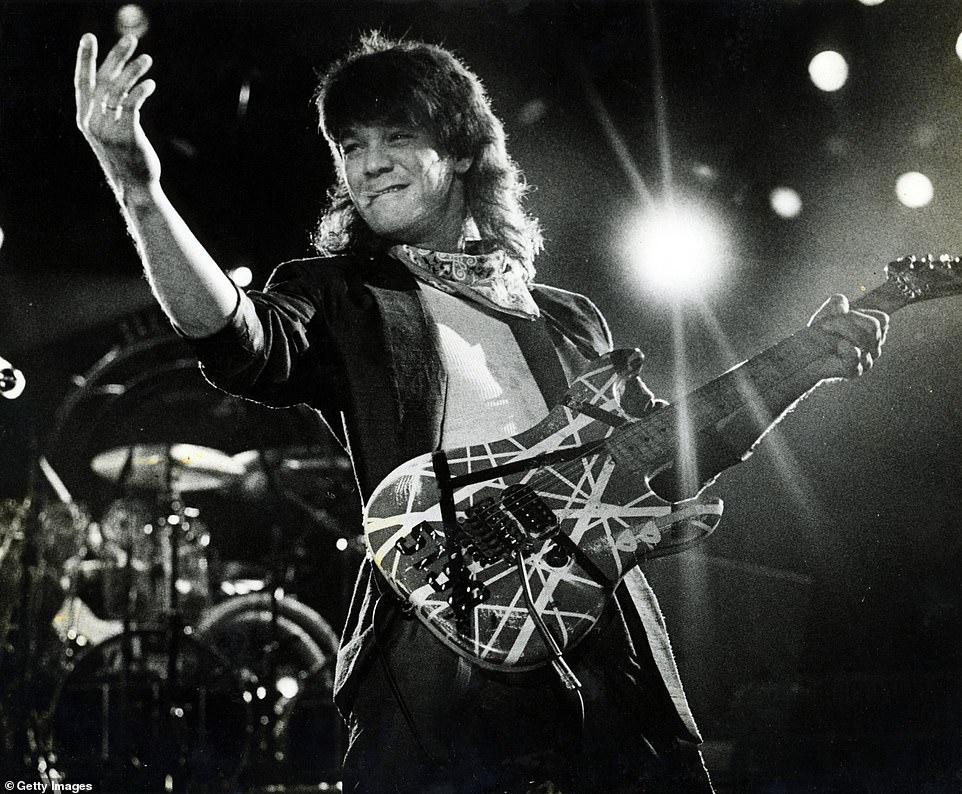 Eddie Van Halen, above, in 1980, performing with a cigarette in Hollywood, Florida 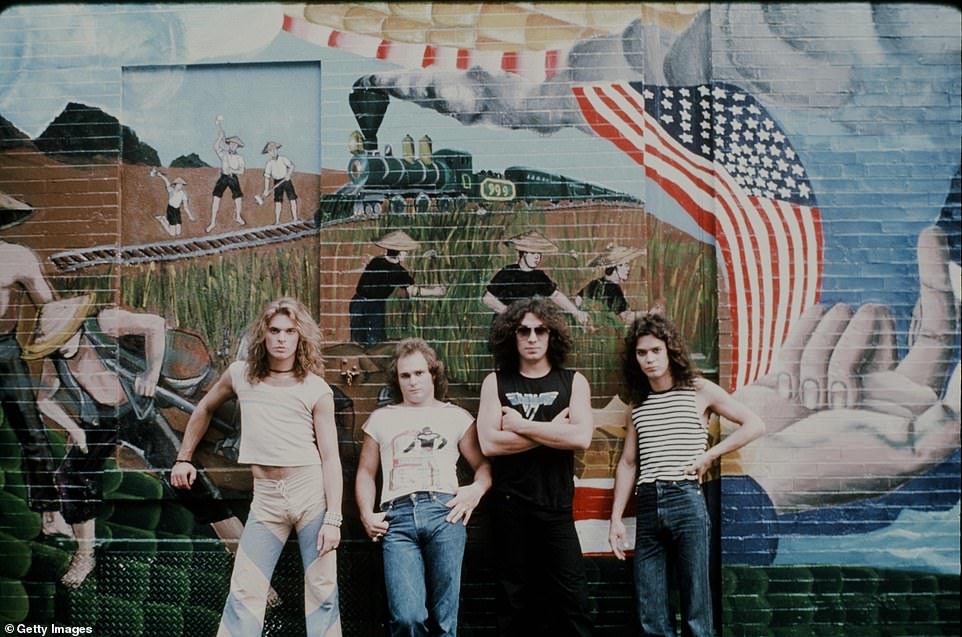 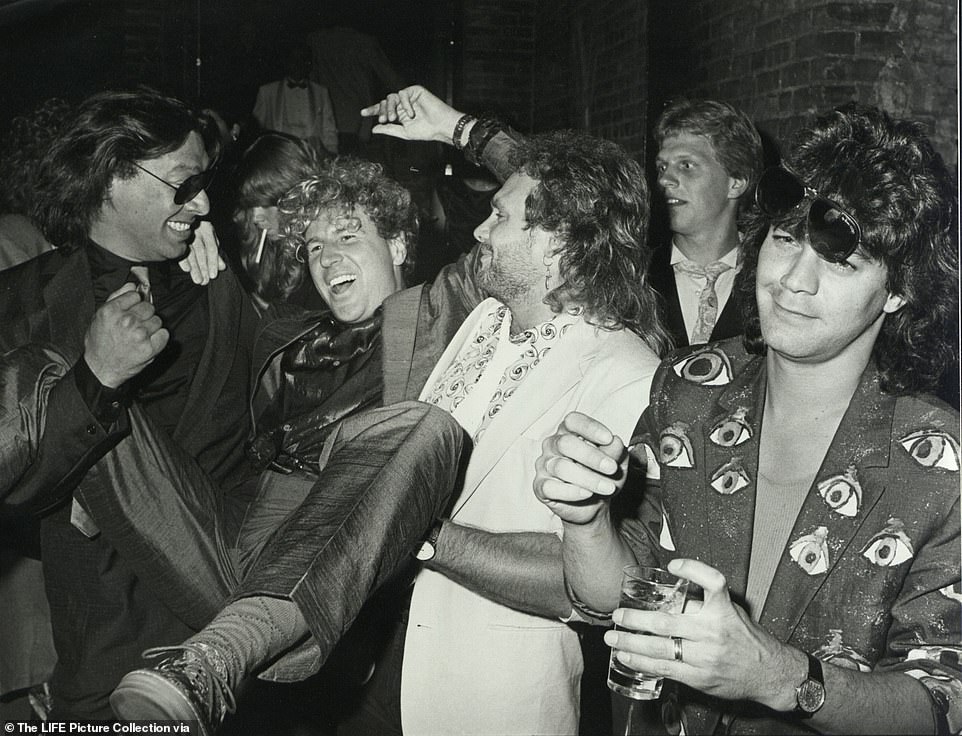 The band having fun sometime in 1980

Is MLB's expanded postseason here to stay? Everybody pleased with wild-card ratings