They were unreliable, unsafe, uneconomic, uncomfortable and, in many cases, downright ugly compared with what we drive around in today. Even so, you have to hand it to the cars of yesteryear. They had character. And they had colour, too.

Just look around you on the roads or in the supermarket car park this weekend and you will see assorted shades of grey with the odd smattering of pastel. Back in the good (or perhaps bad) old days of British motoring, people were perfectly happy ordering a car in banana yellow, tomato red or some truly execrable shades of brown.

And here they all are as far as the eye can see in a tribute to that central strand of our modern history: the British car. Called the Great British Car Journey, this new and gleefully nostalgic Derbyshire visitor attraction will celebrate the very best and revel in the very worst of an industry that helped shape all our lives. 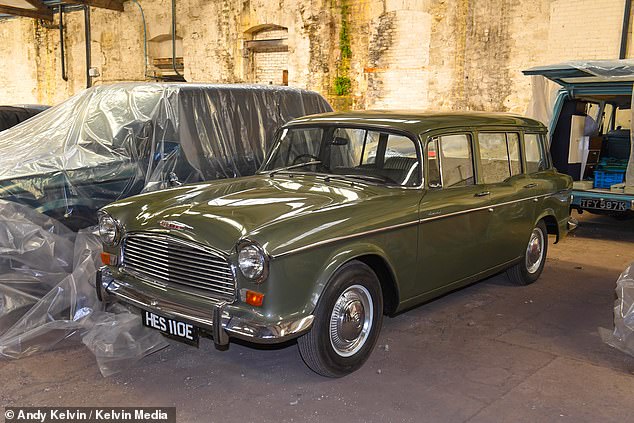 For having been the largest exporter of cars on the planet in the 1950s, within three decades Britain was a byword for shambolic industrial relations and some equally embarrassing vehicles 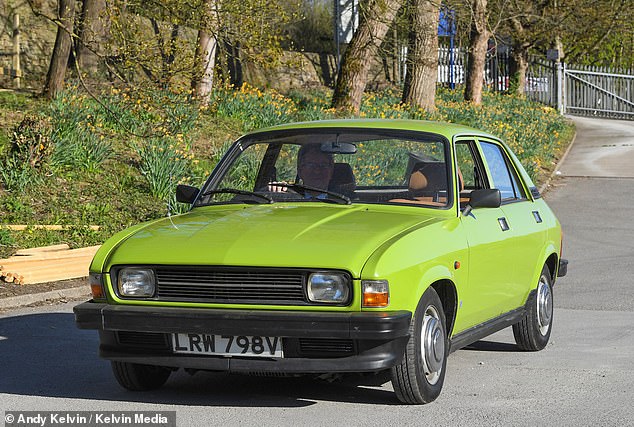 Some can even be driven on their own test route in Ambergate near Derby. Robert Hardman out of the private test road in an Austin Allegro

For having been the largest exporter of cars on the planet in the 1950s, within three decades Britain was a byword for shambolic industrial relations and some equally embarrassing vehicles (with a few honourable exceptions).

Just take the car I am looking at right now. It instantly transports me back to the days of the wonky car radio, bits of crisp ground into every seat and rudimentary air-conditioning — otherwise known as winding down the window a bit.

This is a car that manages to make me car-sick before I have even opened the door: an Austin Allegro in a violently bright shade of green called ‘Applejack’.

But like all the other 120 vehicles that will be on show here (from May 22), it still works. For here, in a former wire factory in Ambergate, we will not only find all the cars we grew up with — but we will actually be able to take them for a spin all over again. It will be a genuine trip down Memory Lane.

From the Capri, the Metro and the Cortina to the Princess, the Scimitar, the Sunbeam and the Imp, these are the cars which generations of British men might spend all weekend washing and waxing; the cars which British teenagers might ‘borrow’ for a first date or to impress their friends.

This is the social history of modern Britain on four wheels, told through brands such as Morris, Rover, Humber and Daimler. There are one or two record-breakers in among the 120 vehicles on display, including the most expensive production car of its day, a Bentley Continental T previously owned by Elton John (he paid £240,000 for it in 1995).

There are also a couple of the eye-catching Morris Minors produced in 1960 to celebrate the fact it was the first car in history to sell a million models.

‘The company wanted to paint them gold but they couldn’t find a reliable gold paint,’ says Richard Usher, the man behind all this. ‘So they painted them lilac instead.’ Mr Usher, 63, is a self-confessed ‘car nut and petrolhead’.

After studying history at Oxford, he went into the car industry, ending up as one of the owners of Auto Windscreens when it was sold to the RAC in 2001 for £112 million. He used his slice of the pie to build a motor-racing circuit in Lincolnshire, Blyton Park, and sold that four years ago. By then, he had devised a new idea.

‘This chap always used to turn up at the circuit talking about his immaculate 1989 Maestro. And it got me thinking because it was so unusual,’ he says. ‘You can find a Ferrari or a Lamborghini easily enough if you have the money. But just try finding an unrestored Maestro in mint condition with an MoT.’

So Mr Usher had the idea of telling the story of Britain’s love affair with its cars. He bought that ‘Regency’ blue Maestro and set about amassing a collection of every sort of production-line model from the early days to the present. Several years and a small fortune later, he is about to open what is first and foremost a labour of love.

‘Look at that,’ he says, savouring an early Mini. ‘It is just such a work of genius. Just 10 ft long and 75 per cent of the space is for the passengers.’

For now, this 1963 Mini — with just 7,000 miles on the clock and one careful lady owner (a long-deceased retired nurse from Aberdeen) — sits under plastic sheets in a huge shed while the builders make the final touches to the main building.

Visitors will pay £15 (£7 for children) to walk through a hall of fame (and infamy) with an interactive tablet that brings up details about each vehicle, starting with the Austin 7.

Built in 1923, it is, says Mr Usher, the foundation of the modern British car industry. ‘Until then, Herbert Austin had been building big cars for rich people and he was nearly bankrupt,’ he says. ‘Then he created this very simple car for a much wider audience. It also had an electric starter so it appealed to women, as they didn’t want to have to crank a handle.’ 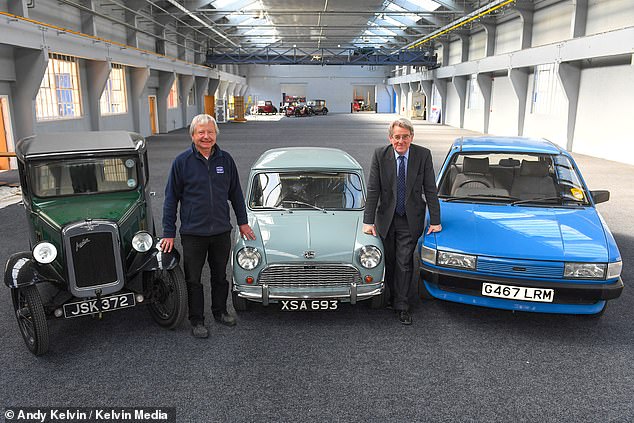 The Austin 7 is one of four ‘Hero Cars’ singled out for special praise in the museum, the other three being the Morris Minor, the Mini and the Ford Escort.

At one point, in the early 1970s, we were making nearly two million cars a year. However, a series of dreadful decisions by the Government, the trade unions and car manufacturers swiftly saw the UK car industry become an international joke. Much of it had merged to become British Leyland, which was nationalised in 1975. Other brands, such as Vauxhall and Hillman, didn’t fare much better. Yet Britain still remained loyal to home-grown brands.

How else do we explain the story of that Austin Maestro. Launched as a ‘rival’ to the VW Golf, it was a dreary, angular, fault-prone hatchback out of date even before it first appeared in 1983. By the time production ceased a decade later, it was so bad, says the RAC’s guide, that the only buyers were ‘senile nonagenarians, skinflint patriots and dewy-eyed nostalgists.’

It was, at least, better than the car it replaced, the hideous, hunched Austin Allegro. I am transfixed by the ghastliness of the ‘Applejack’-coloured model on display here. Back in the 1970s, somebody actually took a conscious decision and said: ‘I’d like that stumpy box-shaped thing — and can I have it in luminous slime, please?’

I climb inside, pull the door shut with a tinny clinking sound (the bodywork is so flimsy that you’d be lucky to survive a collision with a shopping trolley) and sink into the deep plastic upholstery. Special features include an ashtray, a wing mirror and a radio that hisses but just manages to pick up TalkRadio on medium wave.

Mr Usher’s collection also includes the Austin Allegro estate, a thing like a small hearse. This one is in a shade of brown called ‘Bracken’, though I can think of a less charitable description. ‘It’s probably the most unforgivable, wilfully ugly car ever made,’ he chuckles, but it is all part of Great Britain’s love affair with its cars so it’s in the collection. At the top end, there is a Jensen Interceptor with a seven-litre engine — Mr Usher calls it ‘the Ferrari of West Bromwich’ — and a Daimler DS420 limousine that spent many years doing weddings. I climb in the back and find an old bouquet and a whisky decanter still in the cocktail cabinet.

What does Mr Usher drive himself? A Rover 75, it turns out, and, er, a Porsche. And he enjoys taking his old Austin 7 on holiday trips to the Lake District with wife Jane. He is also still very attached to the Mini Clubman, as it was the first car he owned. ‘You only had to look at it and it would start to rust.’

Many of these cars tell a story. There is an immaculate dark green Humber Hawk estate that was bought by High Court judge Sir Fenton Atkinson after presiding over the 1966 trial of the Moors murderers Ian Brady and Myra Hindley. ‘He decided he never wanted to sit through another trial after that and he bought this,’ says Mr Usher.

Also here is a 1954 Daimler DE36 the size of a tank with the number plate AJE 1. It was bought by Sir Arthur Elvin, the man who owned Wembley stadium. He had the roof made an inch higher to accommodate his trilby hat, and the rear seats made softer on the left — where Lady Elvin liked to sit.

It’s amazing how, even after all these years, these cars retain that instantly evocative whiff of damp carpet, vinyl and engine oil — a smell you simply don’t get in today’s gizmo-filled, hermetically sealed family cars.

Once visitors have had their tour, they can pay for a six-mile ‘Drive Dad’s Car’ tour along a private route (with instructor) around the premises — with all the family. Starting at £49, you can recreate the joy (or nightmare) of piling into a Ford Capri or a Morris Traveller or a Rolls-Royce — or even an Austin Allegro. Visitors can bring their own cassette tapes, too.

And right at the end of the tour, there is a reminder of that inescapable destination for every British car — a viewing gallery overlooking a fully functioning workshop and a mechanic trying to repair the blasted thing.