A quarter of Britons arriving from amber-listed countries failed to follow isolation and testing rules, while only half agree with testing protocols, official figures show.

Some 23 per cent of amber arrivals in England in July either avoided staying at home when they were supposed to, or did not take required Covid tests, according to data from the Office for National Statistics.

The ONS surveyed 848 adults arriving in England from amber territories between July 12 and 17.

Overall, just 77 per cent of people said they followed both isolation and Covid testing rules, down from 82 per cent one month earlier.

Two in 10 people did not follow quarantine rules, while one in 10 did not take the required tests.

And separate figures from the ONS revealed about half of Britons are fed up of the strict travel testing requirements. 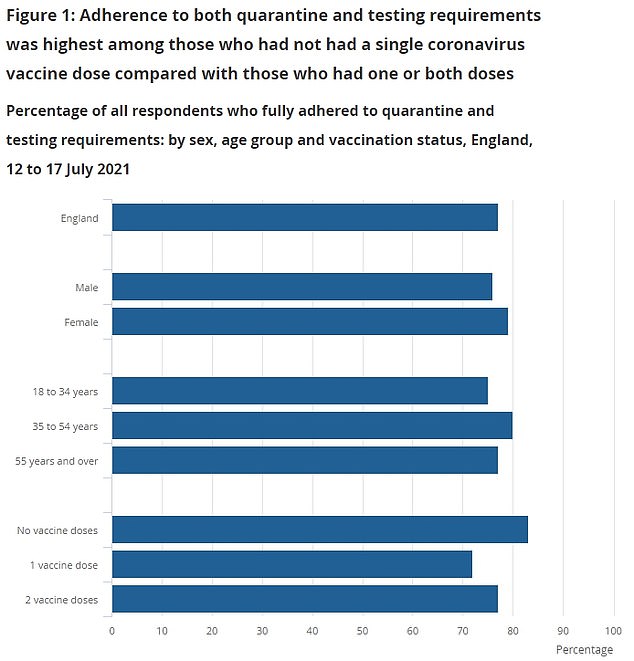 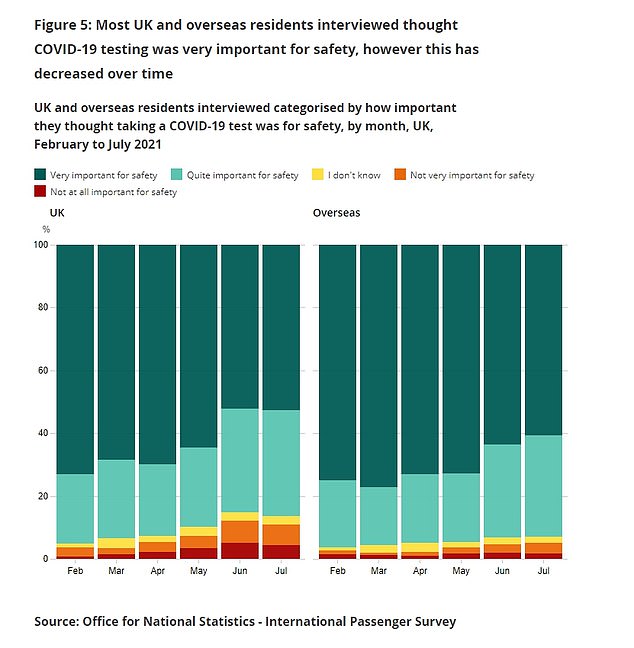 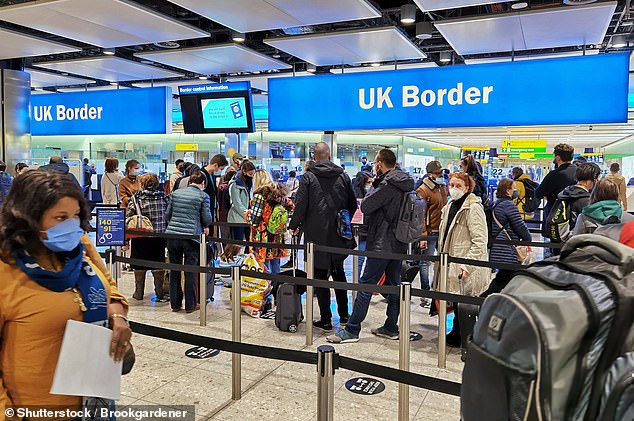 The UK has different testing and quarantine rules in place for arrivals, depending on their vaccination status and whether they spent time in green, amber or red-listed countries. Approval of the testing regime has dropped markedly among both UK and overseas residents since the beginning of the year

The UK has different testing and quarantine rules in place for arrivals, depending on their vaccination status and whether they spent time in green, amber or red-listed countries.

Everyone travelling into the UK must take a Covid test within three days before they arrive.

Arrivals from amber-listed countries – which include France, Portugal and Spain – must take a test within two days of arriving in the country.

And those who are not double-jabbed must also take a test after eight days in the UK and quarantine at home for 10 days.

Women returning from amber-listed countries were more likely to follow Covid requirements (79 per cent) than men (76 per cent), the ONS found.

And people who had not received a single vaccine followed Covid travel rules (83 per cent) more than those who had one (72 per cent) or both doses (77 per cent) of the vaccine. 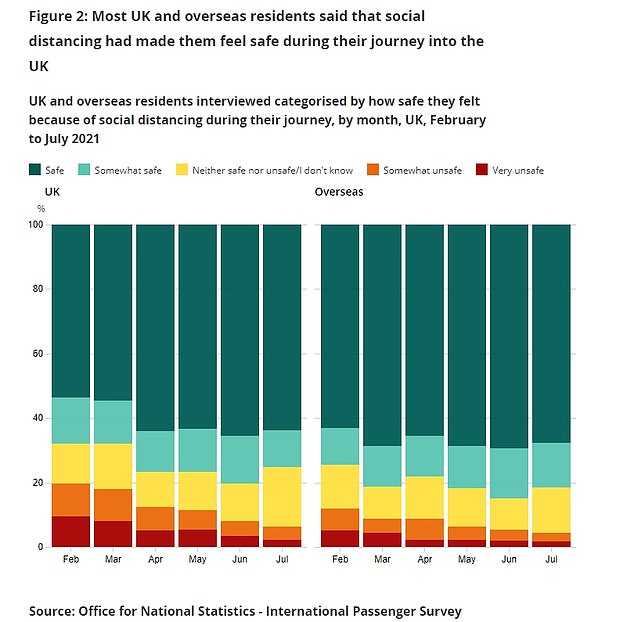 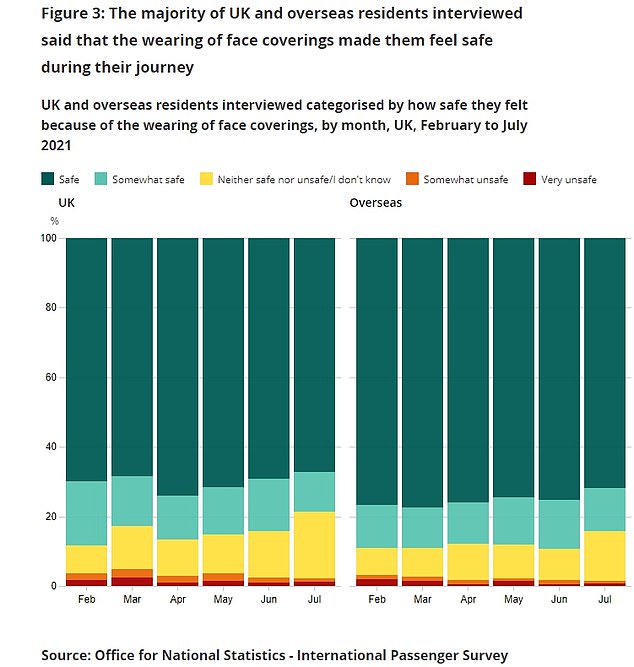 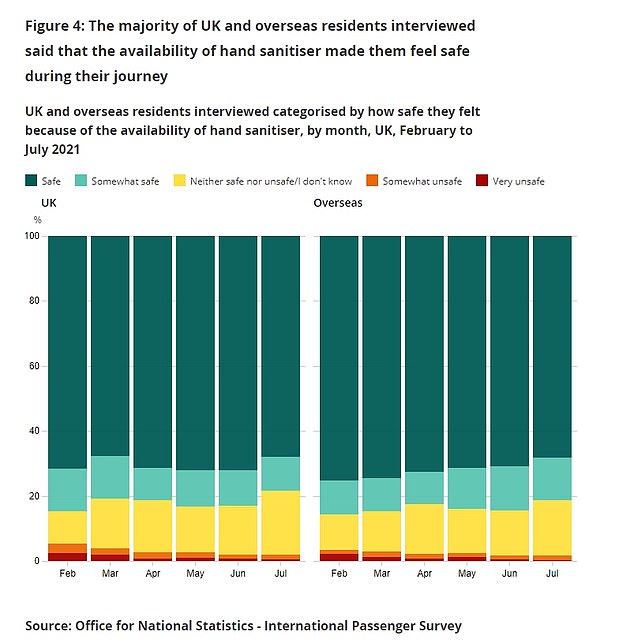 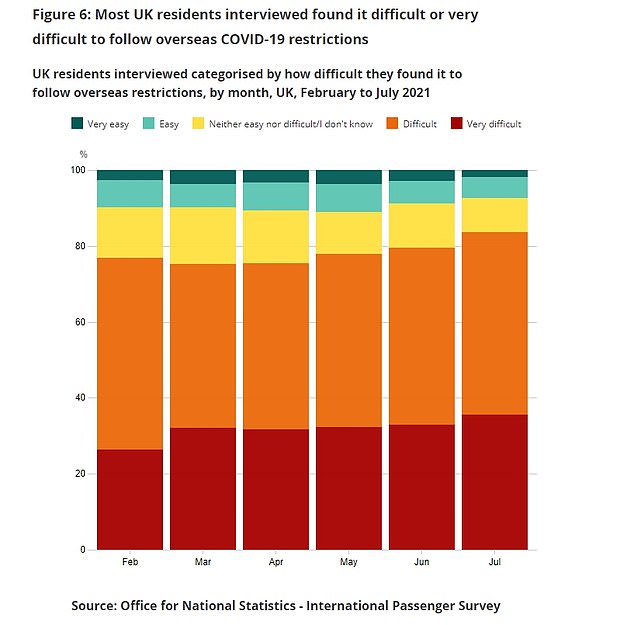 Meanwhile, separate ONS data from revealed public approval of Covid tests for travel has fallen compared to earlier this year.

In February, 73 per cent of Britons fully backed the tests, but this dropped to 64.5 per cent by May and reached a low of 52.7 per cent in July – the most recent date figures are available for.

But nearly three times as many people – 11 per cent – disapproved of the tests by July.

And attitudes among overseas residents followed a similar decline.

At the beginning of the year, 75 per cent of people living abroad who arrived in the UK believed the tests were ‘very important for safety’.

But this dropped to 73 per cent by April and reached a low of 60.6 per cent in July.

Britons and overseas residents continued to support other Covid restrictions during travel.

These figures have stayed largely stable since the ONS began its survey in February.

The vast majority (86 per cent) of Brits said they found it ‘difficult’ or ‘very difficulty’ to follow Covid restrictions when getting back to the UK, an increase from 75 per cent in March.

But conversely, 95 per cent of overseas residents arriving in the UK said they understood Covid restrictions ‘very well’ or ‘quite well’.

IDEX token registers a 315% rise in 24 hours: here are the best places to buy it

Miners To Go One Step Ahead for Greener Bitcoin, How Will BTC Price 2021