A Saudi newspaper confirms Erdogan’s rejection of Islam and Europe, and sanctions surround the Brotherhood 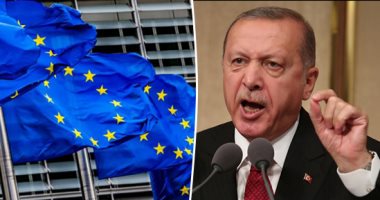 The President of the Turkish regime, Recep Tayyip Erdogan, relied on his foreign adventures to cover up his internal failure, which led to severe cumulative economic crises, an unprecedented deterioration of foreign policy, and a severe decline in the value of the Turkish lira.These crises led to the ostracization of the Turkish regime locally, in Europe, America, and Islam. According to the Saudi newspaper Okaz.

And she said, “The Turkish performance was most disgraceful in the Arab and Islamic region and in the European and global surroundings, and Erdogan’s face, especially his Brotherhood agenda and his expansionist ambitions, to swallow countries such as Tunisia, Greece, Iraq and Syria, interfering in the Caucasus and supporting Azerbaijan against Armenia … Today, Erdogan enters into a crisis with His partner, the Tehran regime.

She added, “Erdogan did not pay any attention to what is happening among his people, as it made them die from hunger and the pandemic. Erdogan has mastered the manufacture of terrorism, this industry that has emerged from the mantle of extremist groups to the Turkish Brotherhood incubator .. And Erdogan moved the wheel of terrorism with the highest speed, industry and practice.” It moved from being a “transit” of terrorism to the stronghold of the Brotherhood and the industry of murder and colonialism, where he played the cards of terrorism and refugees in blackmailing Europe politically and financially, swallowing Libya, Syria, Iraq, Tunisia and Greece, and began to transfer the outputs of the terrorism industry from Syria and export it to Libya .. And Erdogan’s project to revive Greater Turkey has become He is doomed to failure internally and externally, when he was presented with maps published by Turkey since 2016, and containing the dream of the new Ottoman Empire, in which the Erdoganian arms extend outside the territorial borders of the Ottoman Empire, to include parts of Greece and Bulgaria on the European side, and Iraq and Syria in the Middle East.

And what is proven is that when Erdogan does so he forgets or forgets an important historical fact, which is that only the major and superpowers, whether militarily or economically, are the ones who are able to send their armies outside their lands and open conflict fronts in more than one place and location around the world, but Erdogan does not read History does not realize that it is nothing more than a pawn with which the demonic whims of the Brotherhood are manipulated … Erdogan’s dreams are eliminated by utter failure.

Are you a fan of "Apple"? This is the true cost of owning all of its hardware