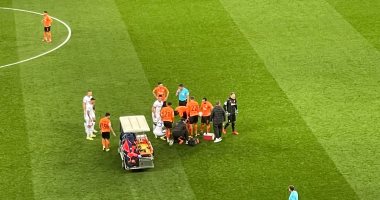 Young striker Lasina Traore was forced to withdraw on a stretcher today, Tuesday, ten minutes after the start of his team Shakhtar Donetsk’s match against its guest, Inter Milan, in the second round of the group stage of the Champions League, due to a serious knee injury..

Lasina Traore (20 years old) injured his knee during the eighth minute of the start of the match after an unintended collision with the right back of Inter, Dutchman Denzel Dumfries, who rushed towards the ball but fell over the leg of the rival striker, who hails from Burkina Faso, causing him a very difficult injury. .

Shakhtar doctors intervened to do a quick physiotherapy for the injured leg and transfer the attacker to a medical center to find out the extent of the injury.

The anxiety was evident on the pitch among Traore’s teammates – many of whom put their hands on their heads – as well as among the Inter players..

Shakhtar and Inter play in Group D, along with Real Madrid and Sheriff Tiraspol, in the Champions League group stage.