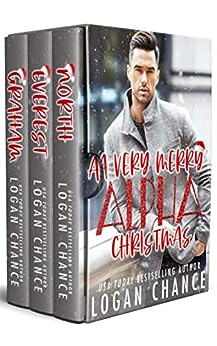 Is there anything hotter than getting your very own alpha for Christmas? How about three filthy alphas instead?

This is a fun and steamy holiday collection filled with not one, but three naughty alphas just for you.

NORTH:
North Caspian, a very successful alpha boss and his lively employee, Holly Winterbourne, will heat up your holiday and kindles. North owns a store for the celebrity babies of Hollywood. When Holly accepts a job there, she is immediately intrigued by her Scrooge of a boss. THIS BOOK IS FUN. (No celebrities were harmed in the making of this book)

EVEREST:
Ginger Darling hates her boss. Meredith Taylor is a mean, overbearing tyrant controlling Ginger’s holiday plans in the palm of her greedy hands. Ginger decides her boss needs to get laid, and the stranger she met in the elevator earlier this morning is the perfect choice to stuff Meredith’s stockings. He was handsome enough. Not that she noticed.
Everest Snow has a secret, and a mission. He won’t let some redhead angel ruin his plans. Date her boss? Gladly, it only helps him achieve his goal…but why can’t he get his little matchmaker out of his head? And why is he going along with her ridiculous ideas instead of making a move on her under the mistletoe? Everest and Ginger will liven up your holiday. Get ready.

GRAHAM:
Graham Steele is the owner of the Mountain Goat Resort and Zoe would love nothing more than to get her handmade soaps in every room. "It was only supposed to be one night of bliss before my big meeting. But, I never expected to run into my one-night stand the next morning as I pitched my proposal. And I never expected his counter proposal…a fake engagement."

(Graham is a Holiday Novella previously published in 2018 and will include new bonus material.)