Rapper A$AP Rocky has been arrested for allegedly shooting a man on a Los Angeles street last year.

He arrived at LAX on a private jet after having just been on holiday in Barbados with his pregnant girlfriend, Rihanna.

The couple recently denied rumors of a split and cheating. 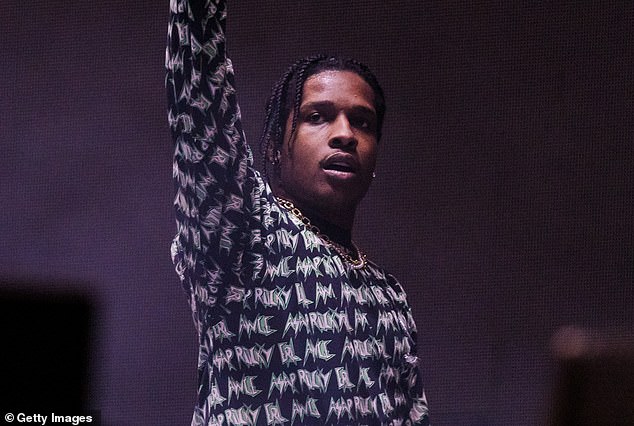 Rapper A$AP Rocky, real name Akim Mayers, has been arrested for allegedly shooting a man on a Los Angeles street last year. He is pictured last month at a music festival in Brazil 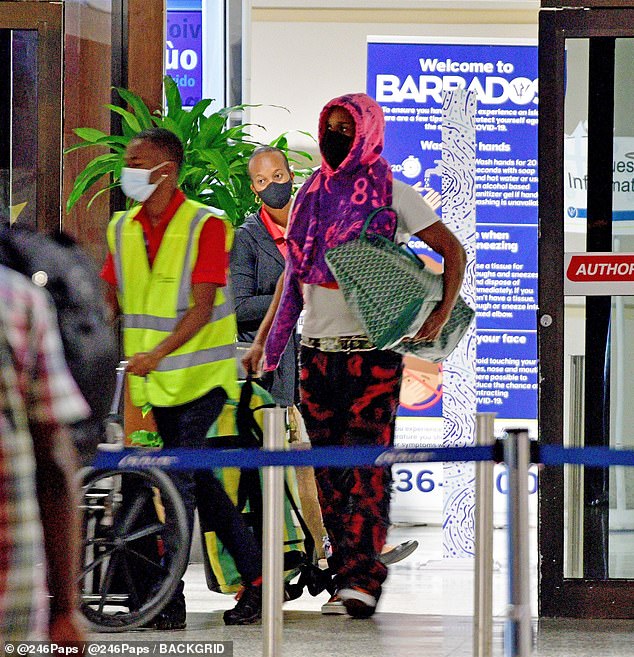 Police detained Mayers at Los Angeles International Airport on Wednesday after arriving to the facility on a private jet. He had been on vacation in Barbados with his pregnant girlfriend, Rihanna. Mayers is pictured at an airport in Bridgetown, Barbados

Los Angeles police were investigating Mayers, 33, after a man claimed the rapper shot him near Vista Del Mar and Selma Avenues on November 6 around 10.20pm.

The victim claimed Mayers approached him on the street and fired a handgun at him three or four times.

One of the bullets reportedly grazed his left hand.

Mayers had reportedly been walking with two other people at the time of the shooting. It is unclear who he was with.

Police arrested the rapper with the help of Immigration and Customs Enforcement.

A representative for Mayers did not immediately respond to DailyMail.com’s request for comment. 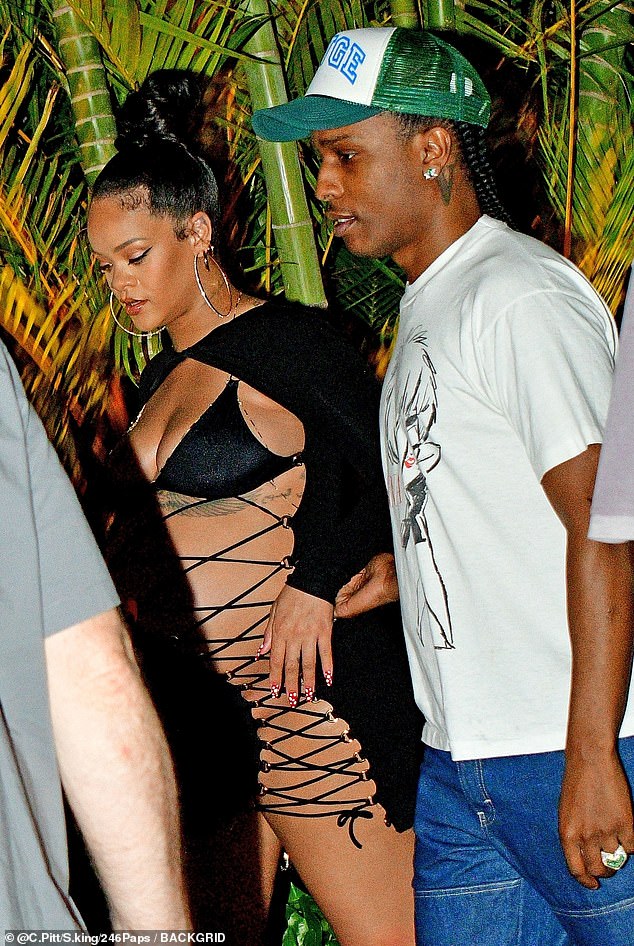 Rihanna met the rapper’s family in Barbados over the weekend

Rihanna, 33, was spotted at an airport in Bridgetown, Barbados on Friday where she met Mayers and his family. She wore a vibrant mini dress that showed off her baby bump.

The couple looked relaxed as they greeted one another and chatted in the terminal with their loved ones by their side.

Their travels came as shoe designer Amina Muaddi, the woman accused of having an affair with Mayers during Rihanna’s pregnancy, fiercely denied the allegations.

Muaddi took to Instagram on Friday to issue a statement after social media was alight with claims the rapper had cheated on the heavily pregnant singer with her.

She wrote: ‘I’ve always believed that an unfounded lie spread on social media doesn’t deserve any response or clarification, especially one that is so vile.

‘I initially assumed that this fake gossip – fabricated with such malicious intent – would not be taken seriously. 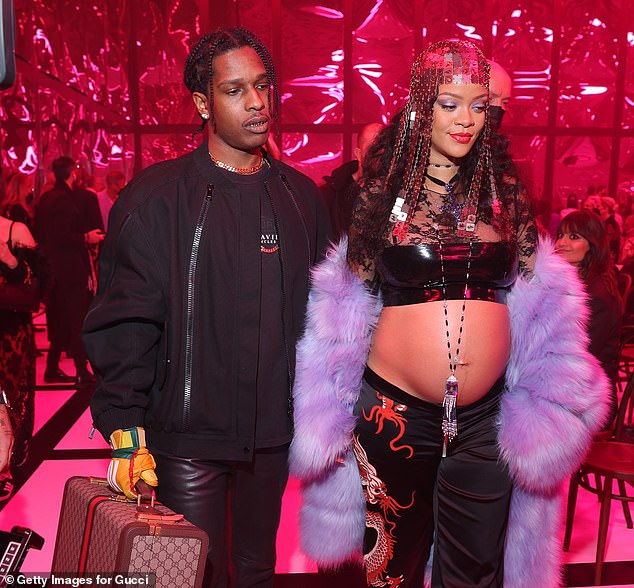 Rihanna and Mayers announced they were expecting their first child together earlier this year. They are pictured together last month

‘However in the last 24h I’ve been reminded that we live in a society that is so quick to speak on topics regardless of factual basis and that nothing is off limits.

‘Not even during what should be one of the most beautiful and celebrated times in one’s life. Therefore I have to speak up as this not only directed towards me but it is related to people I have a great amount of respect and affection for.

‘While Rih is continuing to live her serene, best dressed pregnancy life and I go back to my business – I wish everyone a beautiful Easter weekend!’

A source directly connected to both artists had earlier told TMZ that the cheating and split rumors were ‘100% false on both counts’, adding ‘one million percent not true. They’re fine.’

Mayers and Mauddi have been friends for years and collaborated on a shoe collection in 2020. 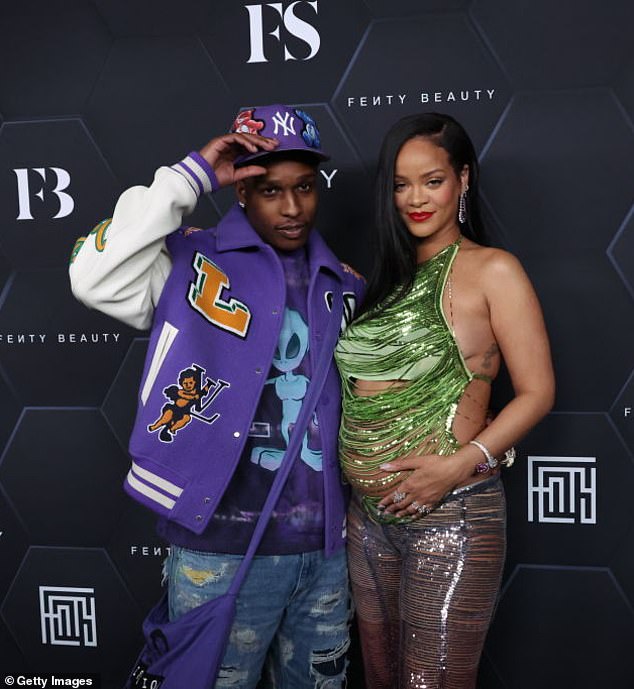 They’re fine! Friends of Rihanna and A$AP Rocky have insisted split rumours are false after the rapper was dogged by claims he’d cheated on the pregnant singer (pictured in February) 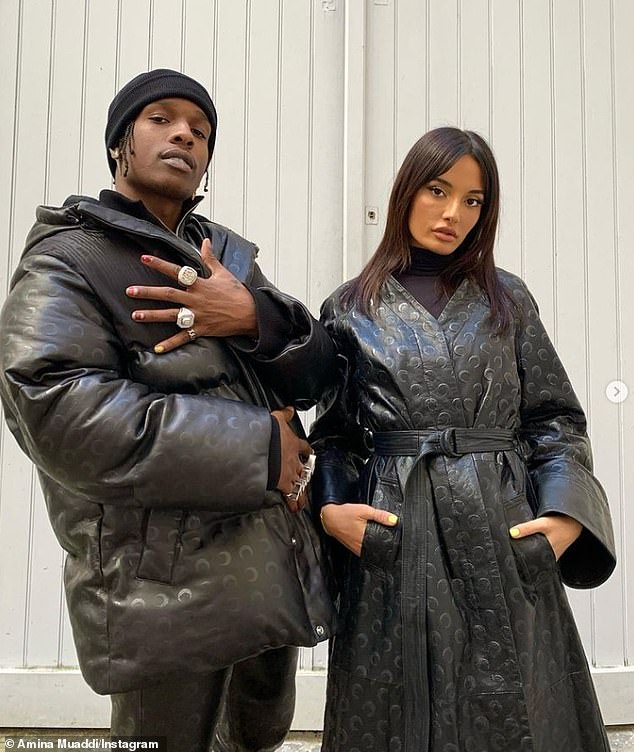 Their travels came as shoe designer Amina Muaddi, the woman accused of having an affair with Mayers during Rihanna’s pregnancy, fiercely denied the allegations of infidelity. Mayers and Mauddi have been friends for years and collaborated on a shoe collection in 2020. They are pictured together in 2020

Rihanna and Mayers were initially linked in November 2020 after it was reported that they were seeing each other following the singer’s split from her ex-boyfriend, Hassan Jameel.

The two had been acquainted ever since the early 2010s, when they began performing and touring with each other.

Rihanna and Mayers remained friends for much of the decade before People confirmed that they were officially dating in November 2020. The pair embarked on a romantic vacation to the singer’s native Barbados in December and the rapper spent Christmas with his girlfriend’s family.

Mayers first spoke about their relationship in May 2021 in a GQ interview, where he called the Barbados born singer ‘the love of his life.’

The Fashion Killa hitmaker – who has never been dogged with claims of infidelity in the past – said: ‘She amounts to probably, like, a million of the other ones…. I think when you know, you know. She’s the One.’

Rihanna and Mayers announced they were expecting their first child together earlier this year.

Last week, Rihanna gushed about her partner in a chat with Vogue magazine as she explained how their relationship blossomed.

‘People don’t get out of the friend zone very easily with me,’ she revealed. ‘And I certainly took a while to get over how much I know him and how much he knows me, because we also know how much trouble we can land each other in.’

She said that quarantine had brought the pair closer together, noting: ‘He became my family in that time.

‘There’s no pretentious my-brand-your-brand bulls**t, it’s just us living. I just feel like I can do any part of life by his side.’

She continued:  ‘What I love the most about us? Transparency with everything: how we’re feeling, what our goals are, what our fears and insecurities are.

‘The vulnerability to be able to say what you feel about each other.’