An ABC segment where a drag queen talks to children about gender identity has sparked a huge debate online – with some irate viewers accusing the broadcaster of ‘grooming’ youngsters while others praised the show for being ‘inclusive’.

Courtney Act, whose real name is Shane Jenek, appeared in the social media series ‘Little Kids, Big Talk’, which was uploaded to the public broadcaster’s Community Facebook page on Friday.

In a segment called ‘kids ask about gender’, primary school-aged children asked the RuPaul’s Drag Race star a series of questions about preferred pronouns, and whether people treat them differently depending on how they are dressed.

One girl asked: ‘Do you like being called a boy or a girl?’ 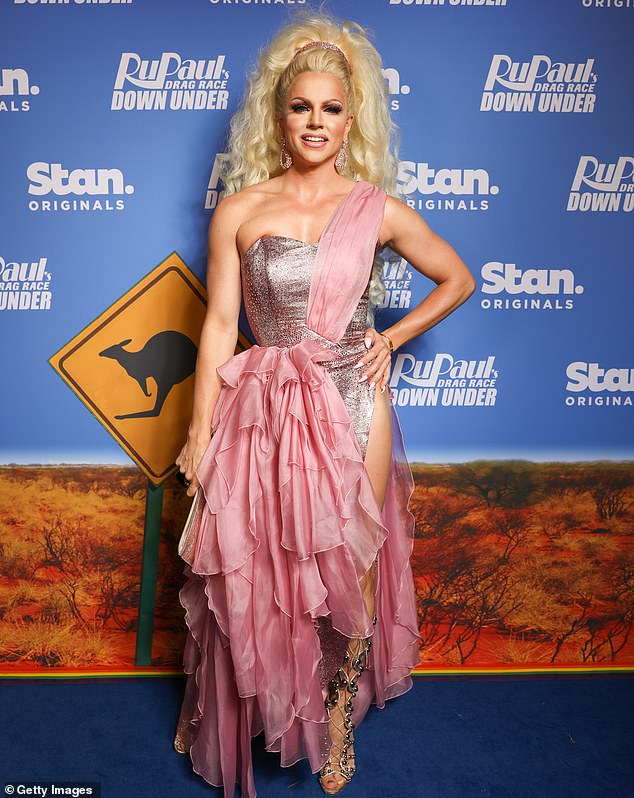 Pictured: Courtney Act at the premiere of RuPaul’s Drag Race Down Under at Sydney Opera House on April 30

‘I don’t really mind,’ they replied.

‘They do actually, it’s quite interesting because when I am dressed up as Shane … I present looking like a boy and people treat me differently,’ they said. 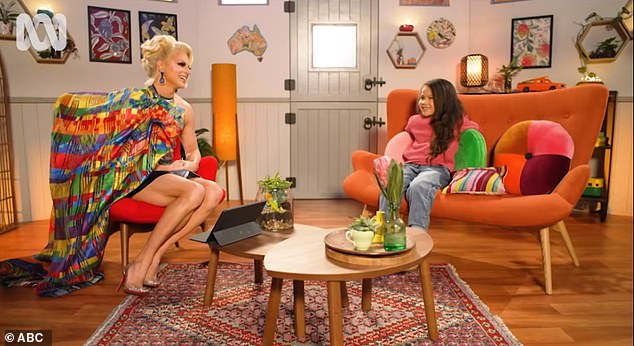 Pictured: Courtney Act speaking with a young girl about gender identity. The girl asked: ‘Why are all drag queens so beautiful?’ 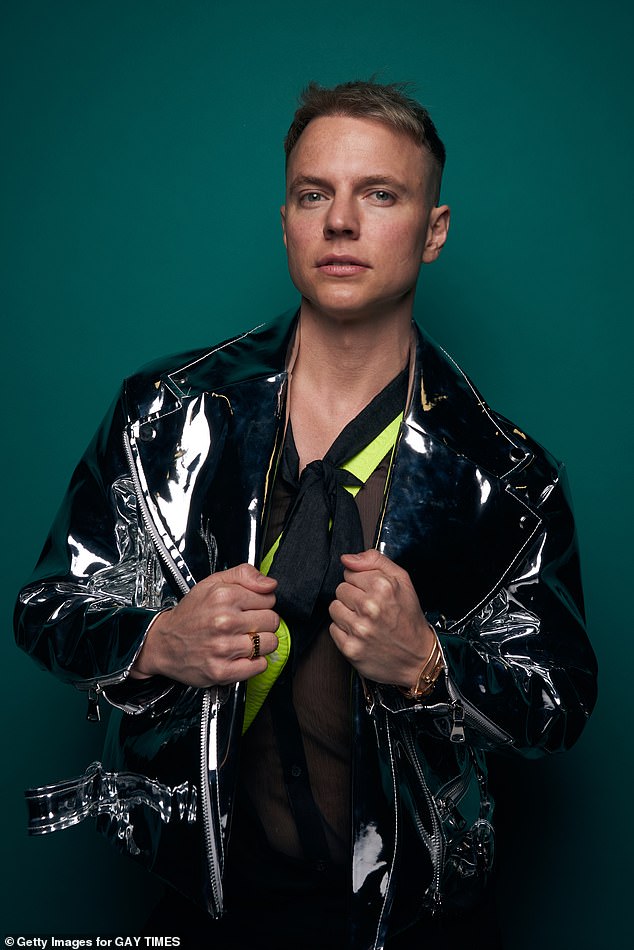 ‘Regardless of how I look, the world looks the same to me, but sometimes people look differently and react differently to me depending on how I’m dressed.’

The 39-year-old was also asked about life growing up as a boy who preferred dancing and singing over football.

‘I was a young boy and people told me that boys should look or act or even feel a certain way and I always enjoyed more of the things that the girls liked when I was at school,’ they said.

‘The world is changing and people are coming to understand that everybody, regardless of your body parts, should be able to do whatever they want to do.’ 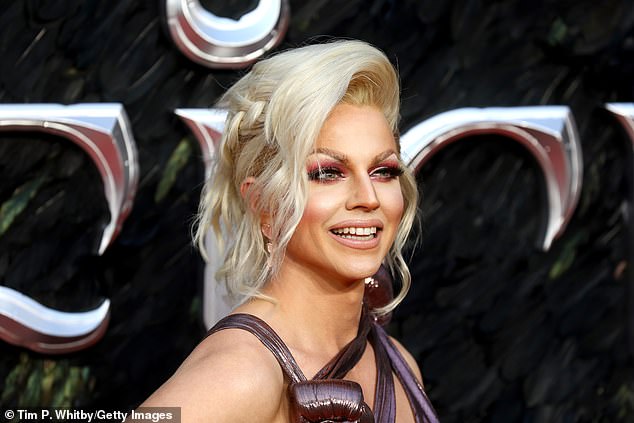 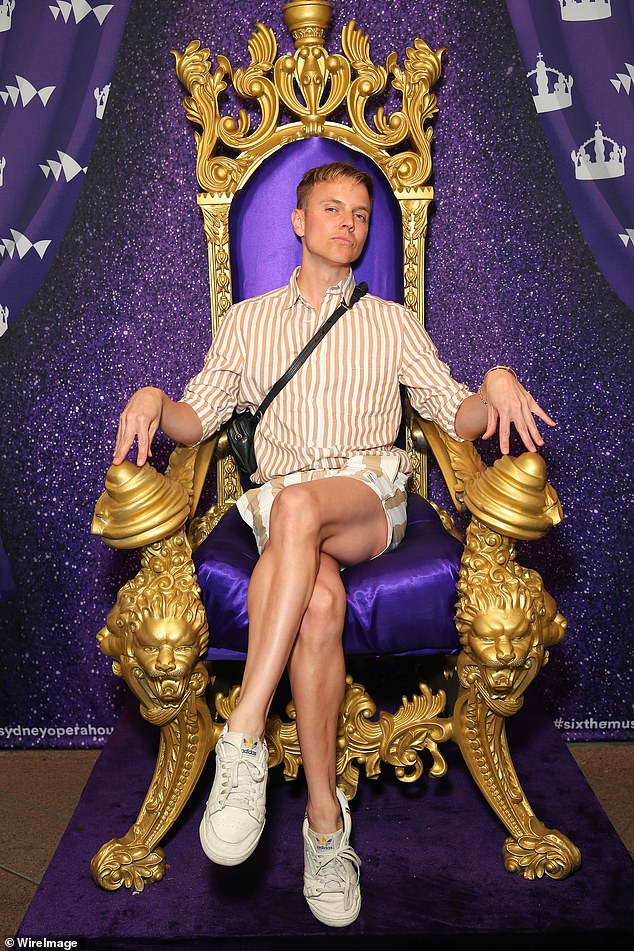 Courtney Act’s real name is Shane Jenek (pictured). They have referred to themselves as ‘gender fluid’ in the past

One little girl also asked: ‘Why are all drag queens so beautiful?’

‘The cool thing about drag is that it’s about expressing how you feel, and that there’s something really beautiful about people being themselves.’

Some viewers slammed the ABC for exposing young children to something as complex as gender identity, but others said the segment was ‘beautiful’.

‘What adults do in their own personal lives is their business and I have no issue, however, to push the ‘queer’ agenda is fundamentally wrong on so many levels towards our children,’ one man wrote.

But someone replied the segment was trying to teach kids to be tolerant of others. 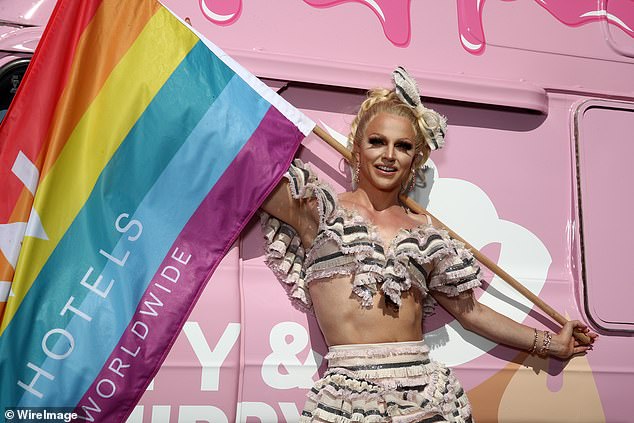 ‘My grandchildren are exposed to this type of education and are developing into tolerant, non judgmental people who can accept that not everyone is going to be created in the same mold,’ he said.

‘It’s not something that comes easily if they reach adulthood to discover this, as most of us have done.’

Another outraged viewer wrote: ‘A disgrace how purity of children is corrupted by media.’

Someone else said: Disgraceful ABC! Sends kids to sexualised website! If this is not grooming, what is? Madness!’

But others applauded the broadcaster for its willingness to explain complex issues about gender identity to children.

‘We watched this on the weekend! Beautiful,’ one viewer wrote.

‘I love Courtney, great person to do this,’ shared another.

‘Freaking love how we are normalising gender fluidity for the younger generation,’ one woman wrote. ‘Courtney looks absolutely gorgeous and those kids are really open minded! Great to see.’

Daily Mail Australia has contacted the ABC for comment.