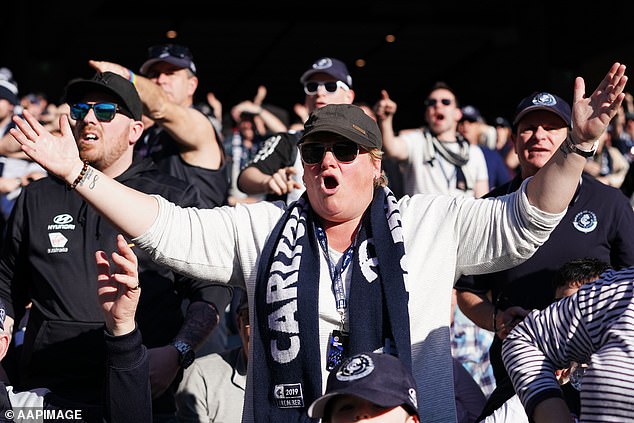 The Aboriginal activist who successfully lobbied Coon cheese to change its name now as one of Australia’s biggest sporting teams in his sights – claiming its song is ‘one of the most racist of all time’.

Dr Stephen Hagan spent two decades on the campaign against Coon cheese, as its name was a derogatory slur against people of colour.

He’s now identified Carlton’s anthem We are the Navy Blues as his next target, saying it is sung to the tune of Lily of Laguna, a song composed by Englishman Leslie Stuart which contains several racist slurs.

The song was written in the 1898 and regularly performed in blackface. The lyrics tell the story of a lonely African-American man who falls in love with a Native American woman. This blatantly racist poster was common for the era

‘The song is one of the most racist of all time with the opening verse including the n-word and ‘coon’ and Carlton has adopted that music and propelled it into notoriety,’ Dr Hagan told News Corp.

‘Lily of Laguna is said to be one of the greats coon songs ever.’

‘Coon music’ was an inherently racist sub-genre 100 years ago that mocked black people.

Like other ‘coon songs’, Lily of Laguna, which was written in the 1898, was regularly performed in blackface.

The lyrics tell the story of a lonely African-American man who falls in love with a Native American woman.

The popular song was subsequently changed in the 1940s after backlash over its racist lyrics.

Dr Hagan said though Carlton’s lyrics weren’t offensive, it being played to a tune that carries deep racist ties was enough to warrant change.

‘Surely it wouldn’t be too onerous a task for Carlton to commission an original musical arrangement without changing a single word of the team song?’ he said.

However, Carlton said it had no plans to change the tune and argued the song had already been changed to a non-racist version by the time its club song was written in 1927.

‘In the process of writing the lyrics of the Carlton Football Club theme song, the creators of the song effectively removed the original song’s racist connotations,’ rhe club told News Corp.

‘The Lily of Laguna lyrics are of no relevance to the lyrics that were penned in good faith for the club.’

Dr Hagan also claims the club told him several past and present indigenous players, including Eddie Betts, did not support changing the tune.

He said the support of such players ‘shocked’ him as he expected they would fight against the ‘racist origins’ of the tune.

‘It doesn’t make the song any less racist that a couple of Aboriginal players who are very loyal to the club defend it,’ he said.

Dr Hagan spent two decades on the campaign against Coon cheese, as its name was a derogatory slur against people of colour

Dr Hagan said the song should be changed even if no one these days got the racist reference, likening it to Jewish people being offended by a team song being sung to Hitler Youth music.

Coon cheese changed it name to Cheer earlier this year, but Dr Hagan said he was disappointed the indigenous community was not consulted about the product’s new name.

‘I would have liked it (the name) to be something more inclusive of First Nations people,’ Dr Hagan told the Sydney Morning Herald.

‘We weren’t even consulted on names. We would like to have contributed.’

Prince Philip’s lifetime of laughter and lasting love in pictures