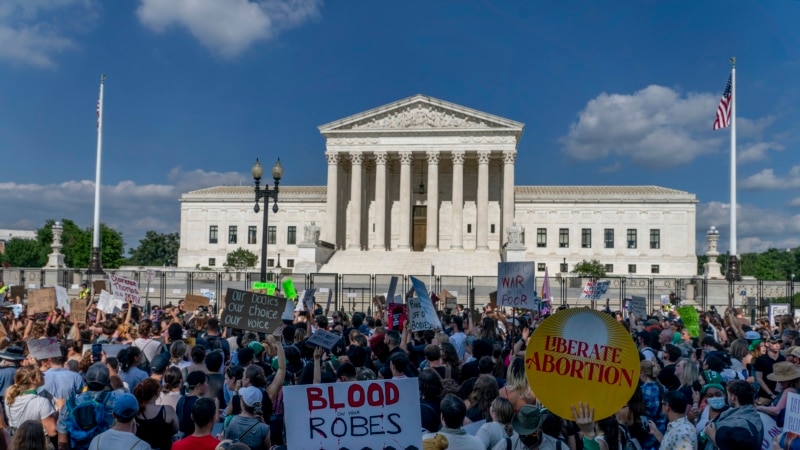 When the United States Supreme Court issues an opinion, that opinion becomes the law of the land.

That is the immediate effect of the high court’s decision to reverse its 1973 abortion ruling. known as Roe v. wade: The right to abortion is no longer constitutionally protected in the United States.

But the controversy is likely to linger, and not just in the court of public opinion.

By leaving states to decide whether or not to allow abortion, the high court’s ruling is expected to trigger a new wave of legal battles in state courts that could drag on for years.

“It creates a lot of uncertainty and potential delay from a criminal law standpoint,” said Mary Ziegler, a law professor at the University of California Davis and the author of five books on the abortion debate.

The Guttmacher Institute, a research group on the right to abortionestimates that 26 states are certain or likely to ban abortion, including 13 states with so-called “trigger laws,” which take effect with the repeal of Roe, and nine with abortion bans on their books that predate Roe. .

It remains uncertain how soon the bans will be implemented. But abortion rights groups like Planned Parenthood and the American Civil Liberties Union (ACLU) say they are determined to fight restrictions and ensure abortion remains accessible to women seeking the procedure.

“The ACLU has been preparing for this moment for years and we will continue to take a multifaceted approach to fight and move forward against abortion prohibition and restrictions,” said Meagan Burrows, staff attorney with the ACLU Reproductive Freedom Project. .

Part of the ACLU’s legal strategy would be to challenge abortion bans in state courts, Burrows said.

Clarke Forsythe, senior attorney for Americans United for Life, an anti-abortion group, said he expects legal challenges in two to three dozen states in the next few years.

“But I think at the end of the day, only maybe a handful or less can create a state abortion right,” Forsythe said in an interview.

In recent decades, abortion rights groups have mostly gone to federal courts to block new state laws restricting the procedure. But with abortion rights no longer protected by the federal constitution, their focus would now shift to state courts.

“Obviously the stakes are going to be higher because it’s not going to be as some sort of supplement to federal protections,” Ziegler said.

Without a doubt, the legal challenges will not be feasible in every state, experts and advocates say.

In recent years, four southern states — Alabama, Louisiana, Tennessee and West Virginia — have changed their legal statutes to proclaim that abortion is not a constitutional right.

Forsythe said votes in two other states, Iowa and Kansas, are likely to support similar constitutional amendments later this year.

That makes it virtually impossible to challenge these states’ abortion bans under their constitutions, said Elizabeth Nash, senior policy associate at the Guttmacher Institute.

But other states present potential avenues for legal challenges.

Eleven states, including Florida, have the right to privacy enshrined in their constitutions, while several others, such as Arizona, have equal protection clauses. These provisions have been interpreted by some state supreme courts in recent decades to uphold abortion rights.

Burrows said the ACLU is “researching each state constitution to get a sense of what claims we might put forth.”

“In states where we have identified a path to challenge abortion bans with our local partners, I think we can expect to see challenges presented after the issuance of any Supreme Court decision that overturns Roe,” he said, without naming the states. .

Ziegler, of UC Davis, said the outcome of state court cases is far from certain and would largely depend on the makeup of a given state’s supreme court.

Take the case of Florida, where Planned Parenthood recently mounted a constitutional challenge to the state’s recently enacted 15-week abortion ban that goes into effect July 1.

In 1989, the Florida Supreme Court recognized abortion as a fundamental right under the state constitution. But Ziegler said Republican Gov. Ron DeSantis has transformed the court with conservative appointments.

“And so we’re likely to see in that state the door open to much broader restrictions,” Ziegler said.

The Midwestern state of Michigan could go the other way, Ziegler said. The state Supreme Court has four elected Democratic justices and three appointed Republican members. In anticipation of Roe’s repeal, Planned Parenthood in April challenged an unenforced, pre-Roe ban on abortion that could go into effect after the Supreme Court ruling is issued.

Last month, a local judge issued an injunction against its application, saying that abortion is protected by the state constitution.

“Building protection (for abortion rights) is a possibility in a place like Michigan,” Ziegler said.

Forsythe of Americans United for Life said efforts to get state high courts to recognize abortion rights could backfire, as one in Tennessee did.

In 2000, the Tennessee Supreme Court ruled that a woman’s decision to have an abortion is “a vital part of the privacy guaranteed by the Tennessee Constitution.”

Fourteen years later, Tennessee voters approved a constitutional amendment that reads: “Nothing in this constitution secures or protects the right to an abortion or requires the funding of an abortion.”

As for abortion rights groups, many say they are not putting all their eggs in the legal basket.

“We cannot rely on the judiciary, whether it be the federal judiciary or the state judiciary alone, to protect the rights and freedoms we hold dear from government intrusion,” said the ACLU’s Burrows.

Instead, “the focus will have to be on mobilizing people to fight back, not just in court but in the state house, at the polls, in the streets, to make it very clear to politicians that the majority of Americans want to keep abortion legal,” he said.