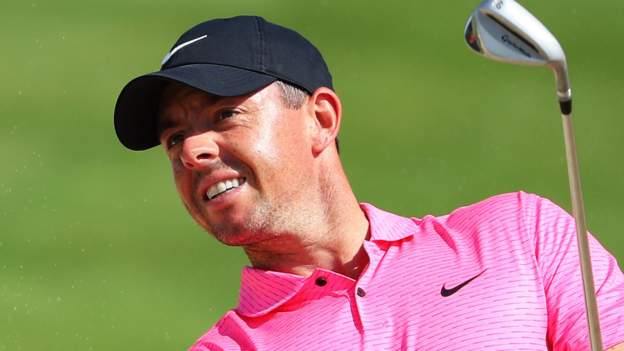 Rory McIlroy hit a bogey-free eight-under-par 64 to set the clubhouse lead midway through the opening round of the Abu Dhabi HSBC Championship.

The Northern Irishman leads by one from England’s Tyrrell Hatton who had two eagles and three birdies in his 65.

American Justin Thomas, who was three over after his first six holes, finished on one over.

The world number three is the highest ranked player in the field and is playing his first event since making a homophobic comment in Hawaii that saw him dropped by a sponsor, despite apologising for his “inexcusable” remark.

World number six McIlroy is competing in his first tournament of 2021 and his first European Tour event in 14 months.

The 31-year-old is returning to the event, which is now the first of four Rolex Series tournaments on The European Tour, after a gap of two years.

McIlroy, who did not win in 2020, has finished second four times and third on three occasions in 10 appearances at the event in the United Arab Emirates.

He started strongly with four birdies in his first nine holes and added a further four on his second nine.

‘A nice way to start the year’

“It feels good. I knew 65 was the best I have shot here and I’ve shot it a few times but after I turned in four under I said to myself, ‘let’s go one better and shoot another four under on the next nine’ and I was able to do that,” said McIlroy after his round.

“I maybe played slightly better on the front nine but I holed some very nice putts coming in for birdies.

“It’s probably the best I’ve putted these greens in Abu Dhabi and it was obviously a nice way to start the year.”

Paraguayan Fabrizio Zanotti sits third in the clubhouse on six under, with Frenchman Romain Langasque one shot worse off.

England’s Tommy Fleetwood is among the later starters on a day that saw the start delayed by around three hours by fog.