British-Australian academic Kylie Moore-Gilbert has spoken for the first time after her two-year prison stint in Iran.

‘I would like to thank the Australian government and in particular the Australian Foreign Ministry and Australian Embassy in Tehran who have been working tirelessly these past two years and three months to secure my release,’ she said in a statement.

‘Thank you also to all of you who have supported me and campaigned for my freedom, it has meant the world to me to have you behind me throughout what has been a long and traumatic ordeal.

‘I have nothing but respect, love and admiration for the great nation of Iran and its warm-hearted, generous and brave people.

Iran has freed Kylie Moore-Gilbert (pictured), a British-Australian academic who has been detained in Iran for more than two years, in exchange for three Iranians held abroad 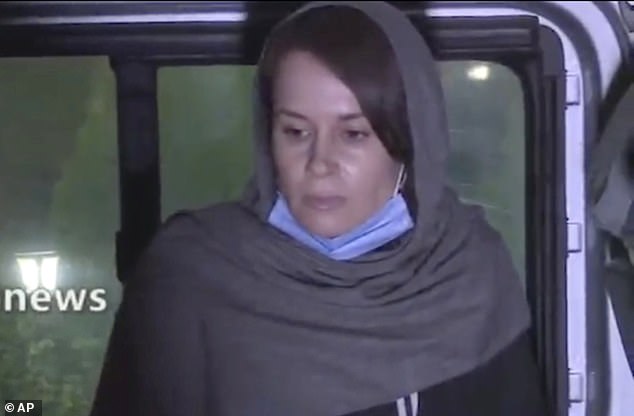 ‘It is with bittersweet feelings that I depart this country despite the injustices which I have been subjected to.

‘I came to Iran as a friend with friendly intentions, and I depart Iran with those sentiments not only intact, but strengthened.’

Dr Moore-Gilbert was a Melbourne University lecturer on Middle Eastern studies when she was sent to Tehran’s Evin Prison in September 2018 and sentenced to 10 years.

After 22 months, she was transferred to the notorious Qarchak prison, widely regarded as the worst women’s prison in Iran.

She is one of several Westerners held in Iran on internationally criticised espionage charges that their families and rights groups say are unfounded.

State TV aired a video showing her with a grey hijab sitting at what appeared to be a greeting room at one of Tehran’s airports. She wore a blue face mask under her chin.

Prime Minister Scott Morrison said on Thursday that Dr Moor Gilbert was on her way back to Australia.

‘I spoke to Kylie this morning. It was wonderful to hear her voice and I look forward to seeing her after her return,’ he wrote in a statement on Facebook.

Mr Morrison said he received news Dr Moore-Gilbert had been released and was with Australia’s Ambassador and officials in Tehran last night.

‘Securing Dr Moore-Gilbert’s release has been an absolute high priority for our Government,’ he said.

‘We have always rejected her conviction and detention and I join with all Australians in praising Dr Moore-Gilbert and her family for their courage, strength and patience as we have all worked tirelessly together to secure her release.’ 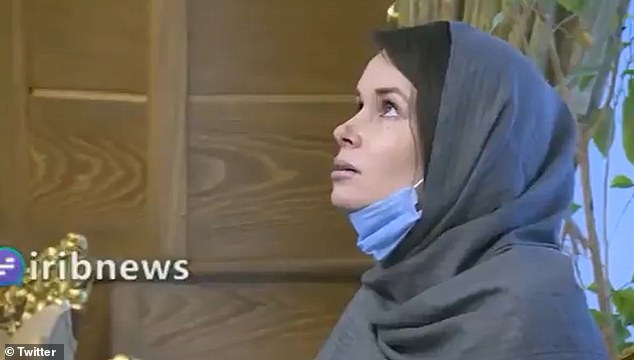 Prime Minister Scott Morrison did not deny reports that two of the three Iranian men released in the exchange were convicted terrorists.

According to several media reports, Saeid Moradi and Mohammad Kharzei – who were jailed in Thailand in 2013 over a failed plot to blow up Israeli diplomats in Bangkok – were released along with an economic activist.

Mr Morrison refused to confirm or deny those reports but said no terrorists had been released in Australia.

‘I don’t go into those details, confirm them one way or the other. Any suggestion that there has been prisoners released in Australia or anything like that is completely false,’ he told Nine’s Today show.

He said Dr Moore-Gilbert has suffered a ‘terrible ordeal’, adding: ‘I’m just so pleased that Kylie is coming home’.

Kate Allen, Director at Amnesty International UK, said: ‘We were always extremely concerned that Kylie was imprisoned solely for exercising her right to freedom of expression – including through her work as an academic – and it’s an enormous relief to hear of her release.

‘There may now be renewed grounds for hoping that UK-Iranian dual-nationals like Nazanin Zaghari-Ratcliffe and Anoosheh Ashoori will also be released from their unjust jail terms in Iran in the coming days or weeks.

‘We’d like to see the UK government pulling out all the stops to pressure the Iranian authorities into ending the judicial charade that has seen Nazanin and Anoosheh held for so long.’ 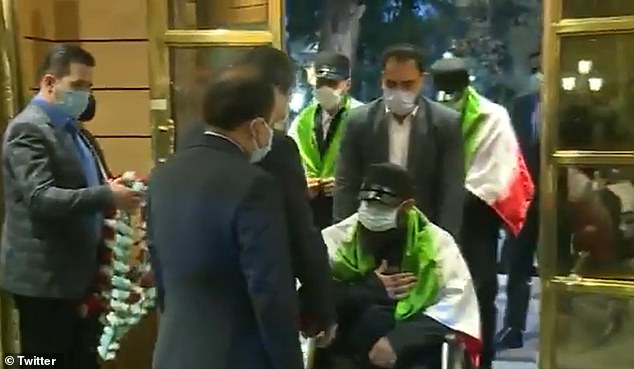 The Iranian state TV footage also showed the three men who were freed in exchange for her being released with Iranian flags over their shoulders.

State TV earlier described them as ‘economic activists’, without elaborating.

A website affiliated to state TV had earlier said that an Iranian businessman and two Iranian citizens who had been held abroad ‘on baseless charges’ had been exchanged.

The Young Journalist Club said they were detained for trying to circumvent US sanctions, reimposed on Iran in 2018 when Washington exited Iran’s nuclear deal with six powers.

International pressure on Iran to secure her release has escalated in recent months following reports that her health was deteriorating during long stretches of solitary confinement and that she had been transferred to the notorious Qarchak Prison, east of Tehran. 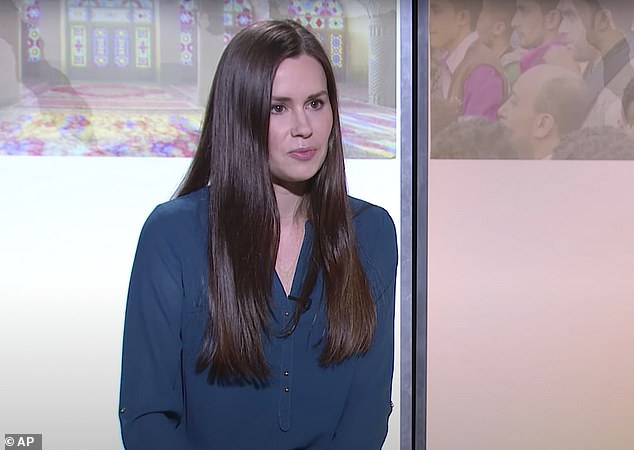 Kylie Moore-Gilbert (pictured in 2017), a University of Melbourne scholar on the Middle East, is one of several Westerners held in Iran on internationally criticised espionage charges that their families and rights groups say are unfounded

Moore-Gilbert has gone on hunger strikes and pleaded for the Australian government to do more to free her.

Those pleas included writing to the prime minister that she had been subjected to ‘grievous violations’ of her rights, including psychological torture and solitary confinement.

She was moved from Elvin prison to the notorious Qarchak prison, widely regarded as the worst women’s prison in Iran, after 22 months.

Last month she was moved to an unknown location after long periods of solitary confinement and poor health, reported The Guardian. 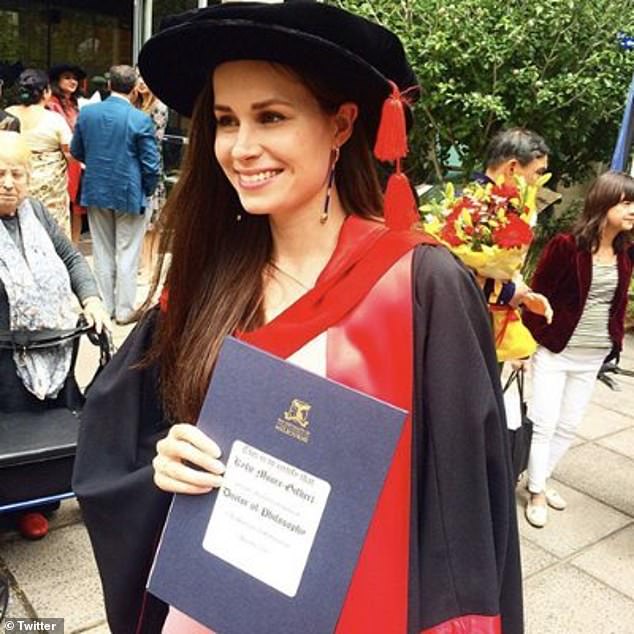 Moore-Gilbert was moved from Elvin prison to the notorious Qarchak prison, widely regarded as the worst women’s prison in Iran, after 22 months

Australia director of Human Rights Watch Elaine Pearson said at the time: ‘Obviously one hopes the move might be good news for Kylie, but we don’t know yet.

‘Kylie has been detained for more than two years now, and she has endured very difficult conditions including extreme isolation.’

Ms Moore-Gilbert was watched closely at Qarchak to ensure she couldn’t contact the outside world.

In a series of letters smuggled from the prison by Australia’s ambassador to Iran Lyndall Sachs, the inmate revealed she had been offered the opportunity to spy on behalf of Tehran in exchange for her freedom – an offer she declined.

‘I feel so very hopeless. I am so depressed,’ she said in a phone call. 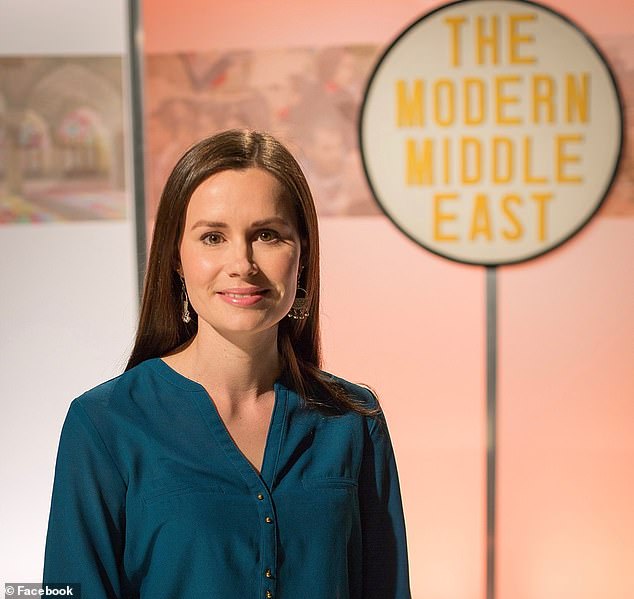 People who attended the conference in 2018 in Qom said she was flagged as ‘suspicious’ by Iran’s Revolutionary Guards – employed to defend the nation’s political system – who arrested her at the airport on the way back to Australia.

Dr Moore-Gilbert went to All Saints College in her regional home town before travelling to the UK as an undergraduate student of the Middle East at Cambridge.

While there in 2011, as a member of the Cambridge Union, she met guest speaker Wikileaks founder Julian Assange.

Friends have told of an intelligent and caring young woman with a strong sense of justice and who lived for her work as an expert in Middle East affairs.

Her detention had further strained relations between Iran and the West, which reached a fever pitch earlier this year following the American killing of a top Iranian general in Baghdad and retaliatory Iranian strikes on a US military base.

There was no immediate comment from Britain’s Foreign Office.

The Qarchak women’s prison is located in a barren desert, east of Tehran, and hosts a large number of inmates despite its small size.

It is known as the most dangerous in the nation due to its inhumane medical and psychological conditions.

The Human Rights’ Activists News Agency (HRANA) published a detailed report about the prison saying it held the worst reputation among women’s prisons in Iran.

According to the report, the prison’s seven sections include more than 2,000 prisoners where 200-300 prisoners are held in each section.

There are no rooms in the prison but there is one hall that has 600 beds. The other prisoners, who number around 1,400 and some children have to sleep on the floor.

The prison does not divide inmates according to the crimes committed, leading to violence.

According to the report, inmates are subjected to all forms of torture which also include rape.

Management punishes inmates who protest the prison’s conditions, such as the bad quality of food or lack of medical services, by sending them to solitary confinement with another psychologically disturbed prisoner in order to torture them.

Prisoners are usually served spaghetti, boiled potatoes and bread. As a result, many prisoners suffer from severe vitamins’ deficiency.

Diego Maradona: Footballing legend who showed us the ‘hand of God’ dead at 60