Hopkins, 83, won the coveted gong for his role in The Father, becoming the oldest person ever to win an acting Oscar.

It is the second Academy Award for the British icon, who first won 30 years ago for his role as Hannibal Lecter in The Silence of The Lambs.

Hopkins has since been nominated a five further times, but he was not expected to take home this year’s award. Boseman – who died of colon cancer aged just 43 last August – was widely tipped to win a posthumous award for his role in Ma Rainey’s Black Bottom.

The Best Actor category was the last award of the night, and Hopkin’s win caused upset on social media.

One user blasted that it was ‘the worst TV ending since Game of Thrones’.

Hopkins skipped the awards ceremony – which was held in Los Angeles’ Union Station – and did not deliver an acceptance speech.

The 93rd Academy Awards has ended in upset, with Anthony Hopkins beating the late Chadwick Boseman to take home the Best Actor award. He is pictured in the film The Father 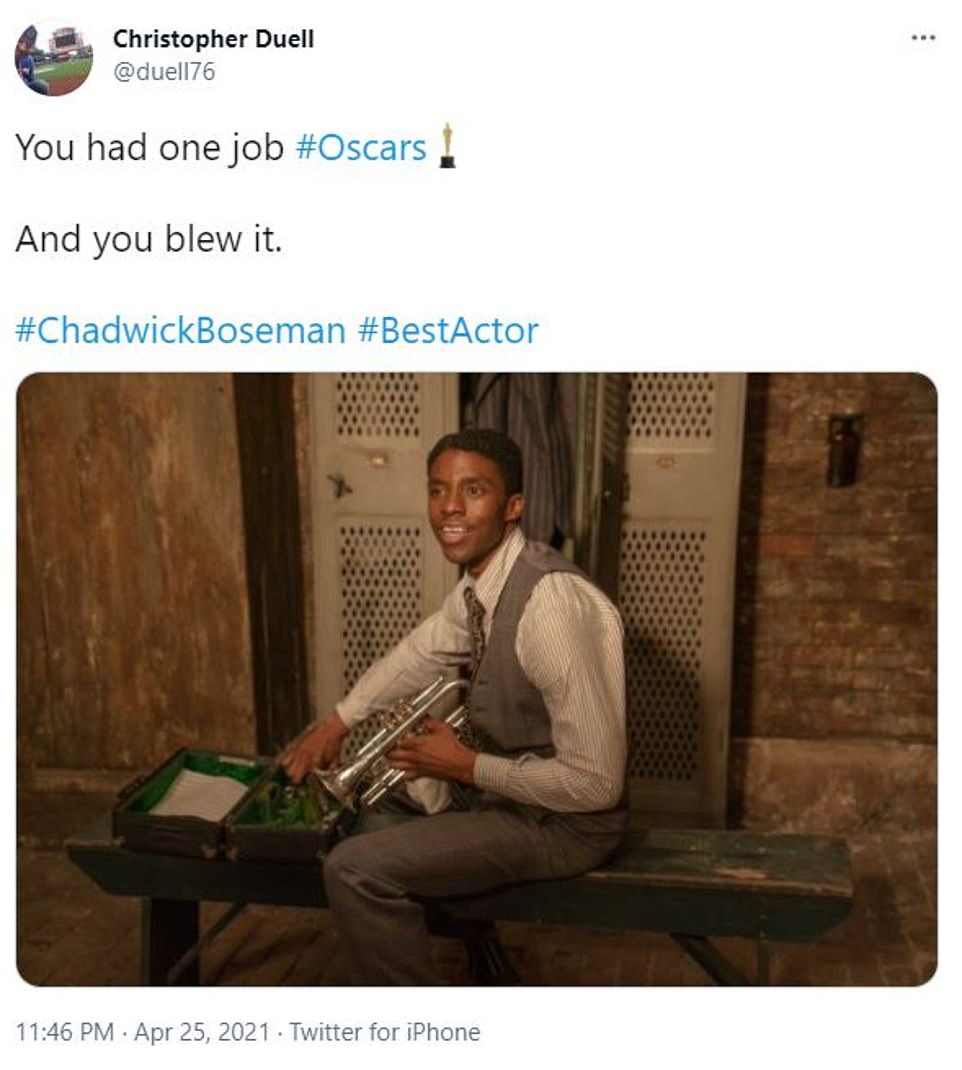 Boseman passed away last from colon cancer last August at the age of 43, but he received a Best Actor nomination for his role in Ma Rainey’s Black Bottom. The Best Actor category was the last award of the night, and Hopkin’s win caused upset on social media

The movie only made $2.5 million at the box office and is the lowest-grossing Best Picture winner in Academy Award history.

However, its two other wins also helped make Oscars history.

Chloe Zhao won Best Director for her work on the film, becoming the first woman of color and the second woman ever to win the coveted award.

She is only the fourth woman to have won three or more Academy Awards for acting, joining Katharine Hepburn, Ingrid Bergman and Meryl Streep in that illustrious category.

McDormand, 63, howled as Nomadland won Best Picture. The cry – which mimicked a wolf – was a meaningful tribute to Michael Wolf Snyder, the film’s sound mixer, who tragically died by suicide last month at the age of 35. 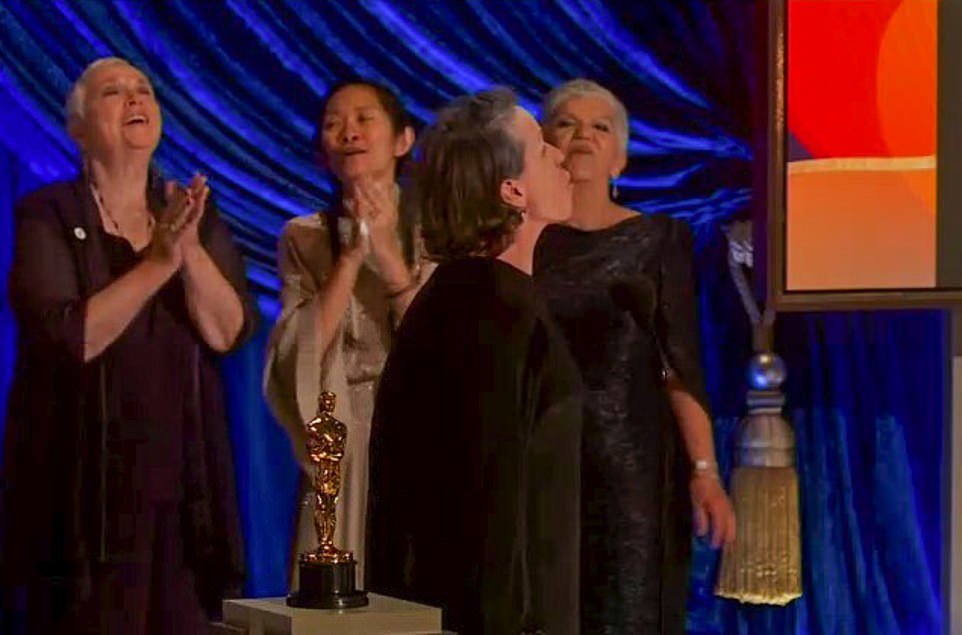 McDormand, 63, howled as Nomadland won Best Picture. The cry – which mimicked a wolf – was a meaningful tribute to Michael Wolf Snyder, the film’s sound mixer, who tragically died by suicide last month at the age of 35 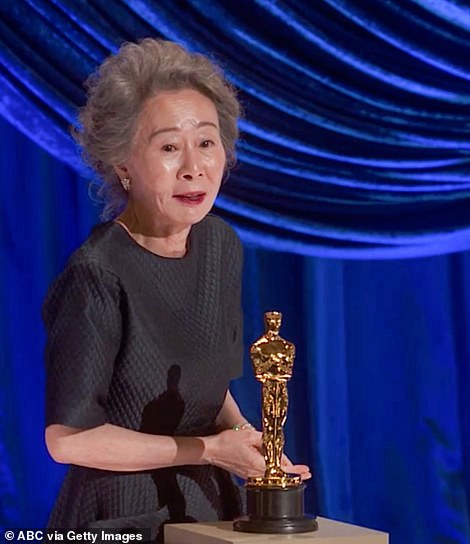 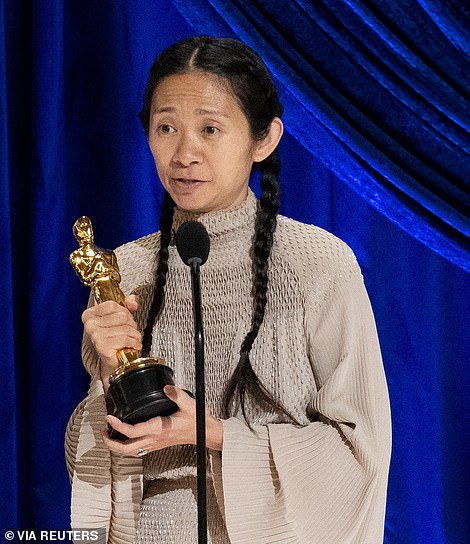 The Academy Awards has celebrated its ‘most diverse’ ceremony in its 93 year history, with Chloe Zhao (right) becoming the first woman of color to win Best Director and Youn Yuh-jung  (left) honored as the first Korean national to win Best Actress 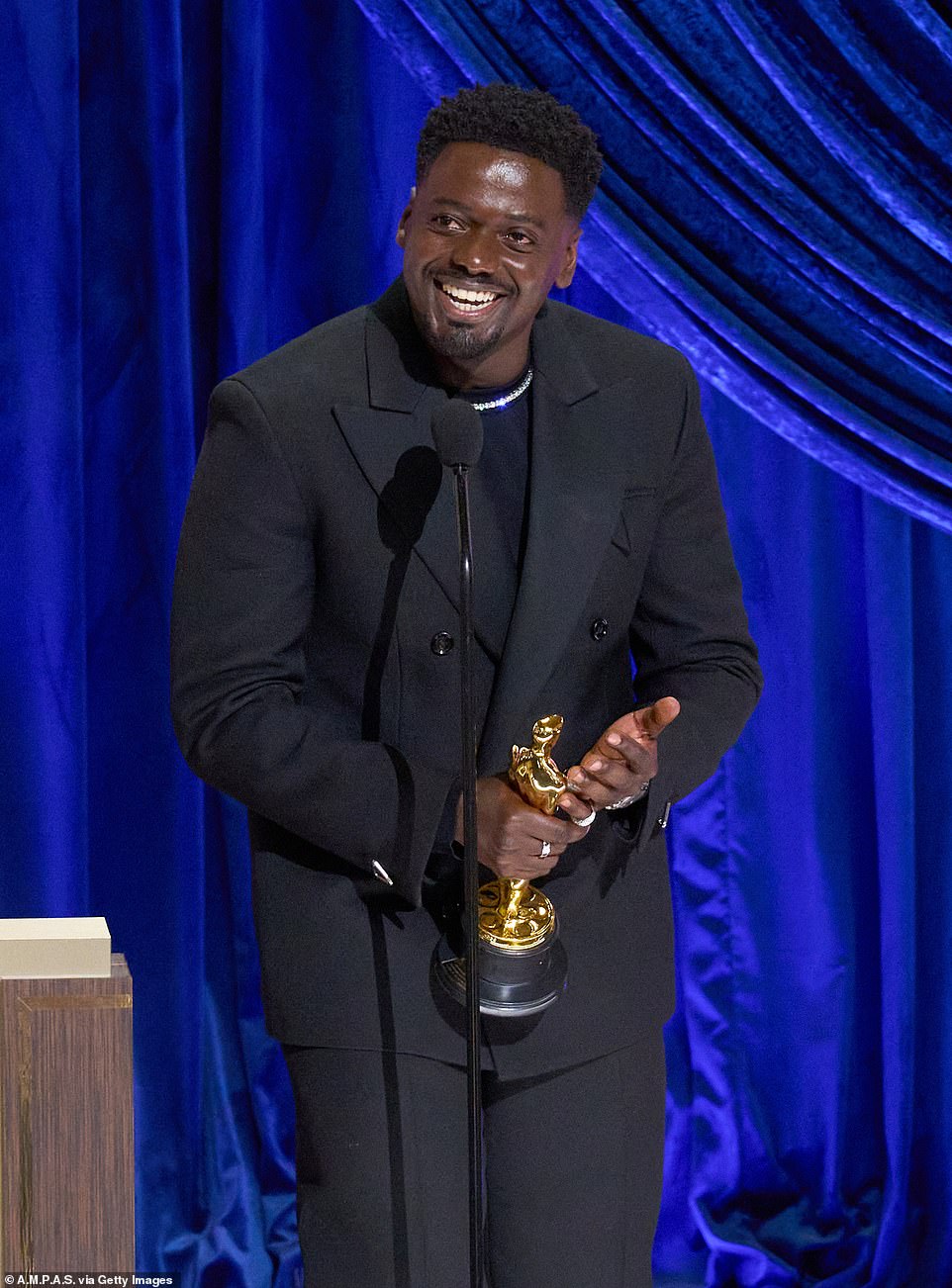 Elsewhere, director Travon Free turned his Oscars acceptance speech into a condemnation of police killings during the 93rd Academy Awards on Sunday night.

The 35-year-old won Best Live Action Short along with co-director Martin Desmond Roe for their drama Two Distant Strangers – a 29 minute movie that examines the deaths of black Americans during encounters with police.

‘Today, the police will kill three people,’ Free stated as he took to the stage to accept his award.

Earlier, as he walked the red carpet, Free also made a political statement, showing off the inside of his blazer which was emblazoned with the names of black people killed by police, including Philando Castile, Tamir Rice, Rayshard Brooks and Daunte Wright. 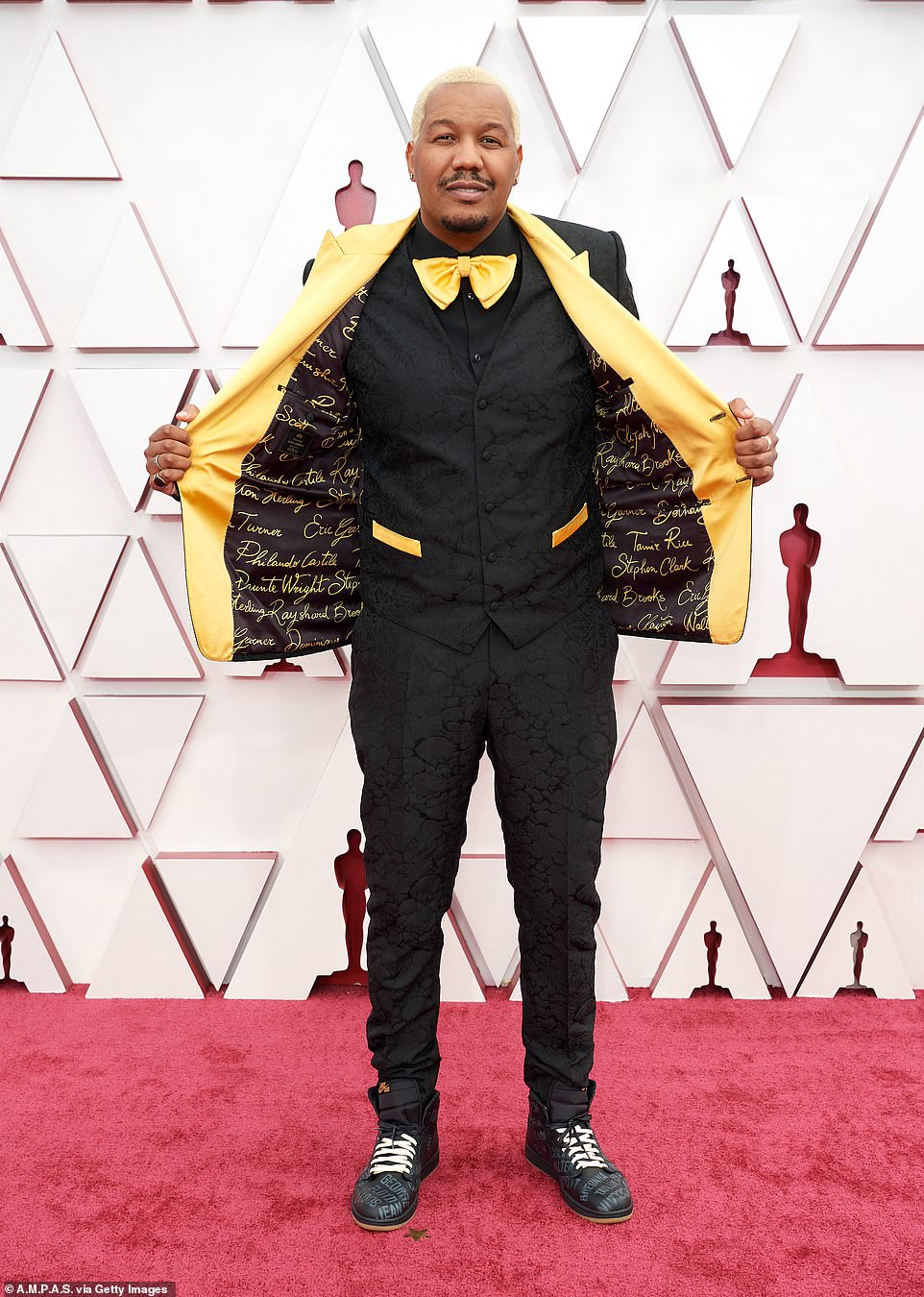 Free wasn’t the only star at the show to make a political statement.

Actress Regina King kicked off the night by hailing Derek Chauvin’s conviction for murdering George Floyd during her opening monologue.

The 50-year-old actress took to the stage at the glitzy ceremony in Los Angeles’ Union Station stating: ‘It has been quite a year, and we are still smack dab in the middle of it. We are mourning the loss of so many.

‘And I have to be honest, if things had gone differently this past week in Minneapolis, I may have traded in my heels for marching boots.’

King’s comments prompted vocal agreement among the 170 people who were sitting in the audience. 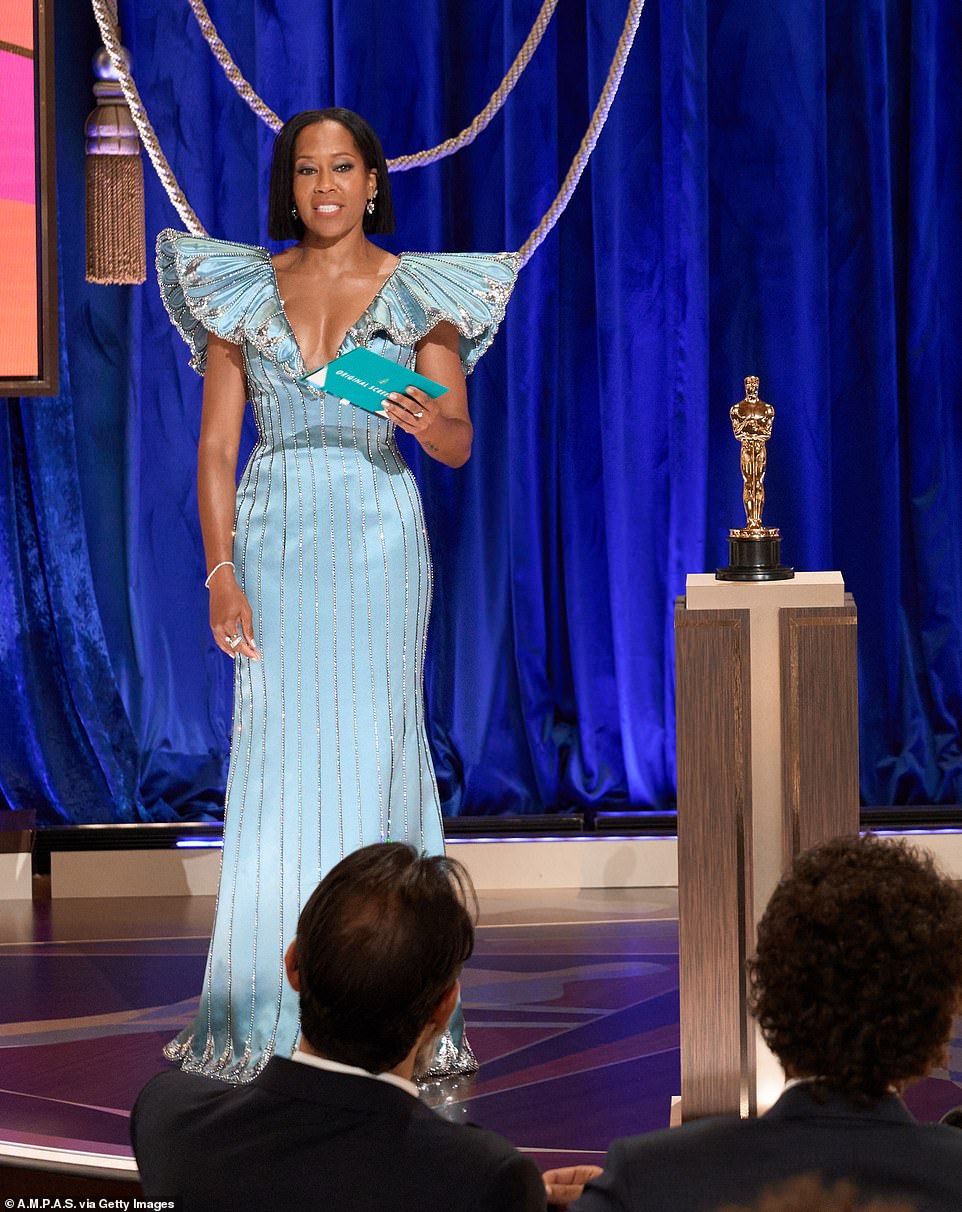 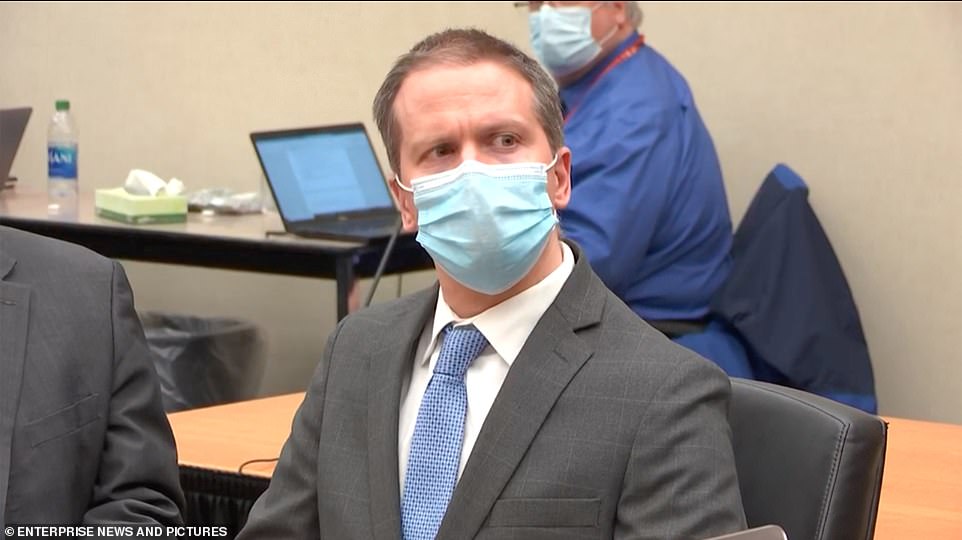 Last week, Derek Chauvin was convicted of second degree murder over the May 2020 death of black man, George Floyd

The actress continued: ‘Now, I know that a lot of you people at home want to reach for your remote when you feel like Hollywood is preaching to you. But as a mother of a black son, I know the fear that so many live with, and no amount of fame or fortune changes. That okay?’

The crowd responding with a loud applause, seeming to confirm their support for King’s commentary. 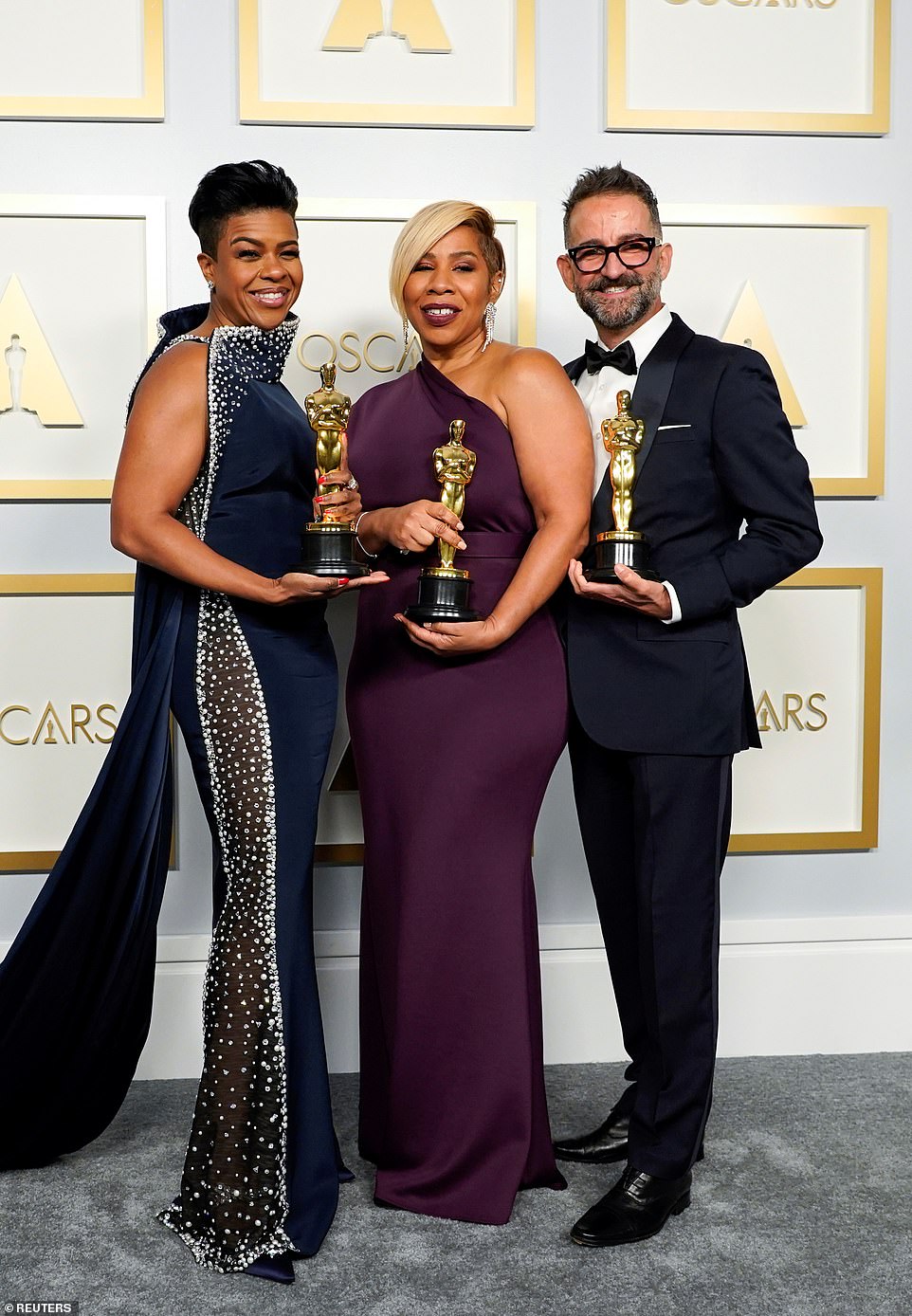 This year’s Academy Awards have been hailed as ‘the most diverse’ in history, with a record number of nominees who are BIPOC (black, indigenous and people of color).

Nine of the 20 acting nominees this year are actors of color and it is the first time in history that the best actor category isn’t majority white.

Nominations in the Best Actor in a Leading Role category include Steven Yeun (Minari) who is the first Asian American to receive a nod; Chadwick Boseman (Ma Rainey’s Black Bottom) who received a posthumous nomination; and Riz Ahmed (Sound of Metal) who is the first Muslim actor to be given a nod in the category.

Zhao is also the first woman of color to ever be nominated for best director.