By Liz Hull for the Daily Mail

Actress Sally Phillips has accused ITV of being ‘irresponsible’ and causing ‘unnecessary hurt’ over an Emmerdale storyline in which a couple terminate a pregnancy after learning their baby has Down’s syndrome.

More than 23,000 people have signed a petition and charities and MPs have written to ITV boss Dame Carolyn McCall calling for the plotline, airing this winter, to be scrapped.

Thousands more, including young adults with Down’s syndrome, have posted comments and videos on social media claiming the story serves only to perpetuate outdated ideas that those who have the condition are unable to live full lives and are a burden to society. 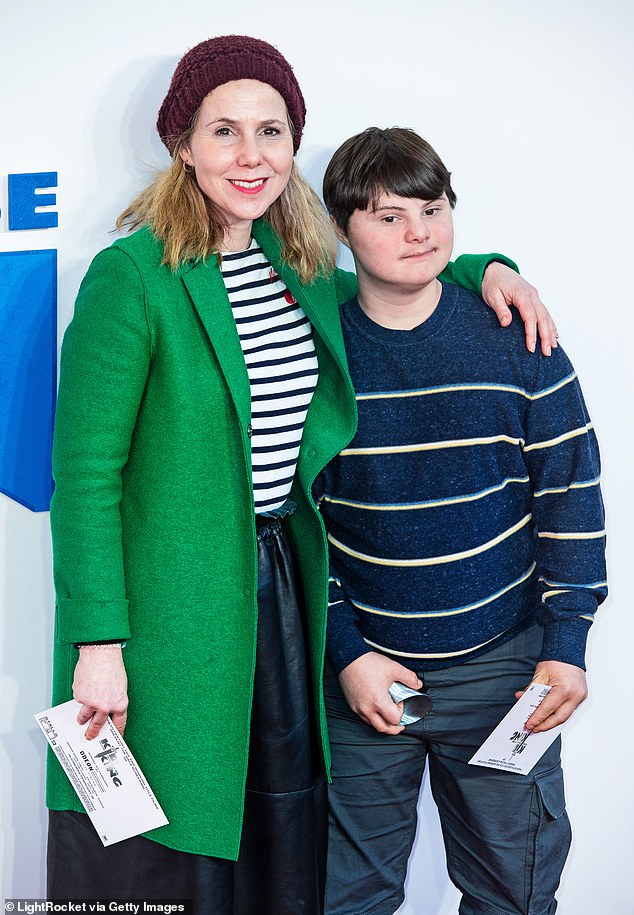 Actress Sally Phillips, pictured with son Olly, has accused ITV of being ‘irresponsible’ and causing ‘unnecessary hurt’ over an Emmerdale storyline

Miss Phillips, 51, best known for her roles in the Bridget Jones films and Miranda, has a son Olly, 16, with Down’s syndrome and she campaigns for rights for those living with the condition.

Yesterday she told the Daily Mail: ‘If Emmerdale wanted to tell a storyline of a termination of pregnancy for medical reasons to support women who choose that path, it could have been told without identifying a specific condition.

‘The use of a Down syndrome diagnosis brings unnecessary hurt to a group of individuals, many of whom watch and enjoy the show precisely because there is a character with Down syndrome.

‘Disability hate crime is on the rise and running with this storyline in Disability Awareness Month was at best poorly informed and thoughtless, and at worst irresponsible.’

In the forthcoming plot, Laurel Thomas, played by Charlotte Bellamy, and Jai Sharma, played by Chris Bisson, discover at an early scan that their baby isn’t developing as expected.

A test, which determines chromosomal or genetic disorders in a foetus, reveals the baby has Down’s syndrome. A significant part of the story explores their relationship with Rhona and Marlon, another couple, whose nine-year-old son Leo has Down’s syndrome. But after agonising over what to do, Laurel and Jai decide to end the pregnancy. 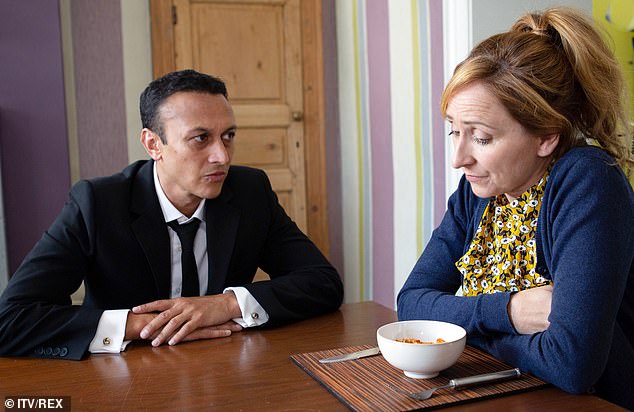 Laurel Thomas, played by Charlotte Bellamy, and Jai Sharma, played by Chris Bisson, (pictured) discover at an early scan that their baby isn’t developing as expected

ITV says that it collaborated with charity Antenatal Results and Choices, medical professionals and people with the condition.

But some of the UK’s largest Down’s syndrome charities say they were not consulted.

Ken Ross, vice-chairman of Portsmouth Down Syndrome Association, said he believed broadcasting the scenes would be in breach of Ofcom guidelines relating to the portrayal of disabilities.

Bethany Asher, an actress with Down’s syndrome who has appeared in BBC soap Doctors, wrote on Twitter: ‘Years ago people like me were locked away and treated like aliens … Your storyline is encouraging people to view us like that all over again.’

John Whiston, managing director of continuing drama at ITV, has defended the plot.

‘It is a story exploring a very difficult decision many parents face and their legal right to make that choice with support, rather than judgment, from their family and friends,’ he said.

Sexual health warning for middle-aged: Infections 'are on the rise among those in their 40s and 50s'