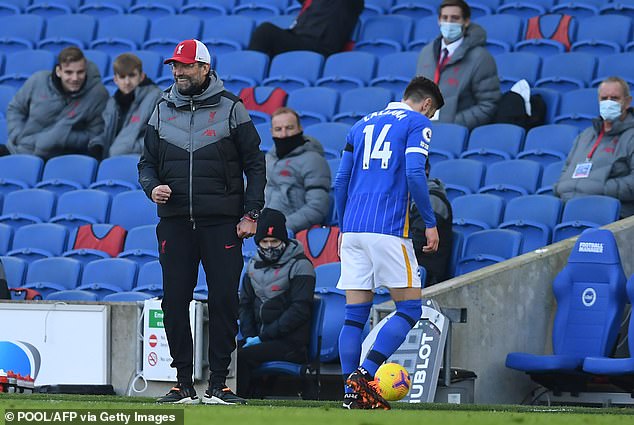 Lallana started on the bench but was brought on by Seagulls’ boss Graham Potter in the 63rd minute, just after Liverpool had taken the lead through Diego Jota.

The former Reds man had barely had a touch of the ball before he was running down the tunnel to be replaced by Alireza Jahanbakhsh.

The midfielder had been a doubt ahead of the game after picking up a groin injury in Brighton’s victory over Aston Villa last weekend.

And it seems the 32-year-old has suffered another injury setback during his brief cameo against his former side.

The Seagulls went on to claim a point in Lallana’s absence with Pascal Gross converting a dramatic 93rd minute penalty after VAR adjudged Andy Robertson to have brought down Danny Welbeck in the area.

Jurgen Klopp had been full of praise for Lallana ahead of the game, calling him a ‘friend for life.’

‘We still miss him but it is not easy to miss Adam Lallana because pretty much everyone at the club still has contact with him – not this week so much but he is a friend for life.’

Back when Lallana left the club in the summer, Klopp insisted he was a club legend after winning the Premier League in his final season.

‘For now, if you ask me about it, I miss already everything about him. He is one of the most influential players on the training quality I have ever had in my life. He is an incredible professional,’ Klopp said.

‘So he is one of the most important players of the time since I am here so I wish him only the best for the future.

‘From my point of view he is already a legend here, so he can become a legend somewhere else from next season on.’