Adele surprised fans when she shared an unexpected performance of her song To Be Loved from her new album 30 on Wednesday.

Without making any prior announcements, the singer, 33, shared a clip of herself belting out the ballad on her sofa.

While 30 is not released until Friday, the songstress treated her fans to an early listen of one of the tracks.

After the six minute song was over, Adele quietly said: ‘There were a couple notes, but…’ before smiling at the camera. 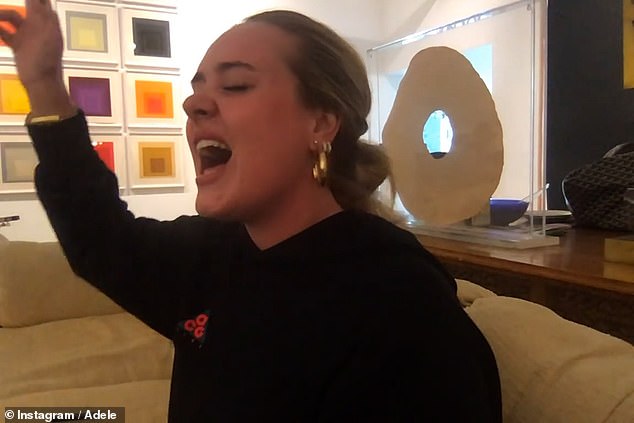 Clip: Adele surprised fans when she released an unexpected performance of her song To Be Loved from her new album 30 on Wednesday

Fans heaped praise on the singer for the powerful song with one writing: ‘We are gonna cry a river guys’.

Another said: ‘You woke up and said “let’s make em weep today,” while an Adele fan page proclaimed it the ‘song of the century’.

One fan said: ‘This album is gonna be (fire)’ while actress Lesley-Ann Brandt said the song was ‘everything’.

During an appearance at a Spotify listening event, Adele advised attendees to emotionally prepare themselves before listening to To Be Loved, which she wrote for her son Angelo, nine, and said she may never be able to perform it live. 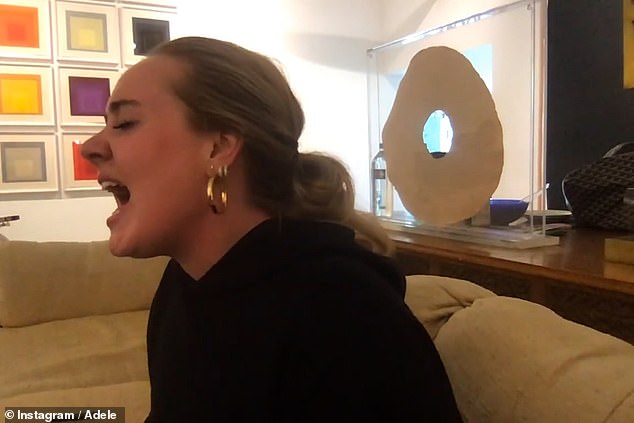 Moving: Without making any prior announcements, the singer shared a clip of herself belting out the ballad on her sofa 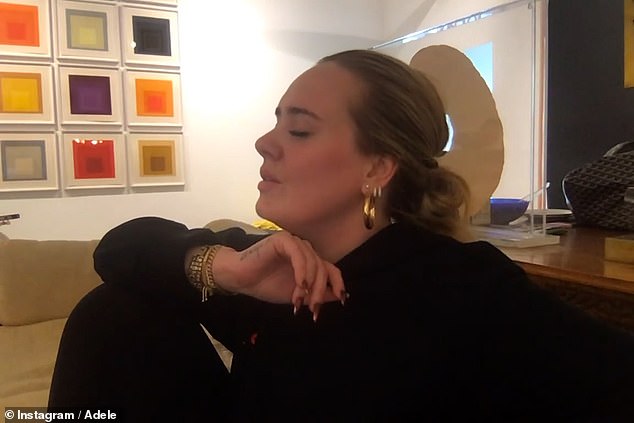 Track: After the six minute song was over, Adele quietly said: ‘There were a couple notes, but…’ before smiling at the camera

Reaction: Fans heaped praise on the singer for the powerful song with one writing: ‘We are gonna cry a river guys’

The unexpected clip comes after it was revealed that Adele’s upcoming album would include heartbreaking voice notes exchanged with Angelo.

In an emotional track, My Little Love, the singer includes audio recordings from conversations with her nine-year-old in which he attempts to stop her crying amid her 2019 divorce, which is the key subject of the record.

Adele – who shares Angelo with ex-husband Simon Konecki – sings: ‘I’m so sorry if what I’ve done makes you feel sad’.

In more heart wrenching notes she says ‘Tell me you love me’, to which Angelo replies, ‘I love you, one million per cent. I feel like you like me too.’

Doting dad: Adele dedicated her album 30 to the son Angelo, nine, – who she shares with ex-husband Simon Konecki (picture with Simon in 2013)

Adele continues in the tearful voice notes: ‘You know Mummy doesn’t like anyone else like I like you, right? Mummy’s been having a lot of big feelings lately, I’m confused and I don’t know what I’m doing.’

In more voice notes to her son she says: ‘I love your dad because he gave you to me… I’ve had a bad day, I’m very anxious…

1. Strangers by Nature – The opening track is laden with funeral chords and sets the tone for the imminent heartache fans prepare to witness.

2. Easy on Me – The lead track from the album is already a classic on the album

3. My Little Love – The appearance of Angelo on this song makes it the most candid and details the intricacies of  her pain.

4. Cry Your Heart Out – In a bid to avoid an excess of ballads, this track is wholly more upbeat.

5. Oh My God – A mid-tempo R&B number about the arrival of new love.

6. Can I Get It – The album’s Rolling In The Deep moment sees her team up with Swedish producer Max Martin and his sidekick Shellback.

7. I Drink Wine – Having a song centered around wine harks directly back to Adele’s recent chatter about her relationship with alcohol during the split and how she kicked booze to shed her ‘hangxiety’.

9. Woman Like Me – The most blatant references to Simon are made in the comments about ‘laziness and complacency’ here.

10. Hold On – This track has ‘Adele’s Crazy Friends’ listed as the choir and she told Oprah she could see the song being ‘a national anthem’

11. To Be Loved – Adele revealed this track is about her estranged father Mark Evans and the steps she has taken to allow herself to be loved despite his absence.

12. Love Is a Game – Adele ends on a high-note with the track where she sings ‘Love is a fame for fools to play and I ain’t fooling’

15. Easy on Me (with Chris Stapleton)

‘I feel very paranoid, stressed, and I’m hungover which never helps. I feel like today is the first day since I left him that I actually feel lonely — and I never do.

‘I just feel really lonely and frightened, and I’m worried I might feel like this a lot.’

In Woman Like Me meanwhile, she sung of Simon: ‘Complacency is the worst trait to have, are you crazy? It is so sad a man like you could be so lazy…

‘All you do is complain about decisions you make / How can I help lift you if you refuse to activate?’

While Adele features her son on her new album, and dedicated the music to him, she revealed this week that her One Night Only CBS special concert was the first time Angelo had ever seen her perform.

The Someone Like You hitmaker took to the stage at the Griffith Observatory in Los Angeles in late October to film the show.

While on stage she gushed: ‘This is the first time my son has ever seen me perform!

‘It’s the absolute honour of my life to have you here tonight, baby,’ she added with a smile.

Looking back on the heartwarming moment on Twitter, Adele said she’d ‘never been so nervous in my life’ for her son to watch her live for the first time.

She wrote: ‘It was also the first time my son saw me perform and I’ve never been so nervous in my life!! I hope you like it, tune in tonight at 8:30pmET / 8pm PT on CBS x.’

The star explained that Angelo had previously attended rehearsals with her when the arena was empty, and compared them to a packed show when they had been to see Taylor Swift together.

‘He’s like, “So many people come to her shows,” ‘ she recalled with a laugh. ‘But I make him leave before they all arrive. It was so cute and so funny.’

The Rolling in the Deep singer then told Oprah Winfrey in the accompanying interview that after the release of her first single Easy on Me from 30, her son was taken aback by her popularity.

She said: ‘There was like a hundred thousand people waiting [and] you had all these likes,’ she recalled Angelo saying. ‘Then he was like, ‘People really like you.’ ‘

Adele then discussed her hopes for her son’s future with the chat show host, saying she only wants for him to be a ‘good and happy person.’

‘I don’t expect anything of him,’ she explained. ‘I don’t care what his career is, as long as he’s passionate about whatever it is that he does and that he’s happy.’

In the interview Adele also revealed that adjusting to being a single parent and her divorce was a ‘process’ and ‘exhausting’.

Dedication: While Adele features her son on her new album, she recently revealed that her One Night Only CBS special concert was the first time Angelo had ever seen her perform