Jamie Vardy added another record to his remarkable career by becoming the club’s oldest scorer in European competition as Leicester secured a fine away win over AEK Athens.

On his return to the starting line-up after injury, Vardy – who turns 34 on January 11 – drilled in an 18th-minute penalty to set Leicester on the road to their second straight Europa League victory.

Hamza Choudhury scored only his second goal for Leicester six minutes before half-time to put the visitors in control and although substitute Muamer Tankovic pulled a goal back for AEK early in the second half, Leicester remained dangerous and Cengiz Under hit the post. 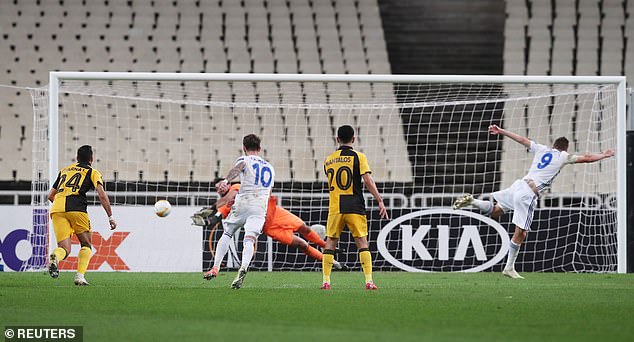 Against a backdrop of empty seats in Athens’ Olympic Stadium, where Kelly Holmes won two golds for Britain in the 2004 Games, Brendan Rodgers’ men sealed their third consecutive victory in all competitions, despite the absence through injury of defenders Timothy Castagne – who may be missing until the middle of November – and Jonny Evans.

With Vardy in the team, though, Leicester are a match for any side.

After recovering from a calf problem, the Foxes’ top scorer came on as a substitute to score the winner at Arsenal on Monday and he did not have to wait long to repeat the trick in the Greek capital.

Running on to a fine pass from James Maddison, Vardy had already been clipped by Stratos Svarnos before goalkeeper Panagiotis Tsintotas felled him. Tsintotas got both hands to the spot-kick but could not keep it out. 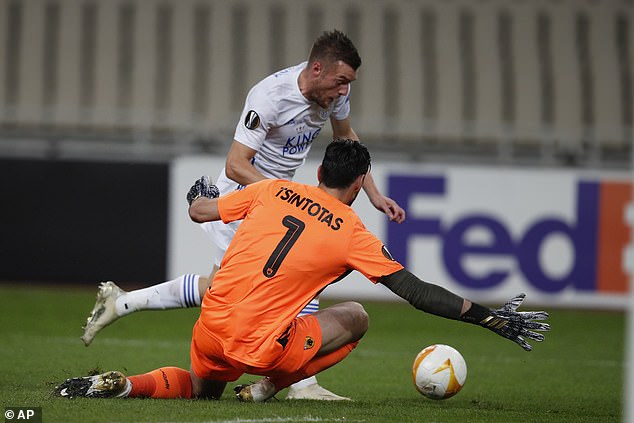 Earlier, Vardy had teed up Maddison on the edge of the box, with the playmaker’s low shot flying just wide.

Leicester were dominant at this stage and Under should have marked his first start for the club with a goal after more good work from Vardy and Maddison, but the Turkish winger’s touch took him wide and Mantalos was able to block the shot.

Yet without Evans, Leicester looked vulnerable at the back. Kasper Schmeichel made a sharp stop to tip over Marko Livaja’s point-blank header in the 27th minute and two minutes later, the Croatian latched on to a mistake from Wes Morgan before sliding his finish just wide from 20 yards.

Luckily for Leicester, Choudhury was more accurate when his chance came. Vardy flicked on Maddison’s corner and when the ball reached Choudhury, his shot wrong-footed Tsintotas and went in at the near post. 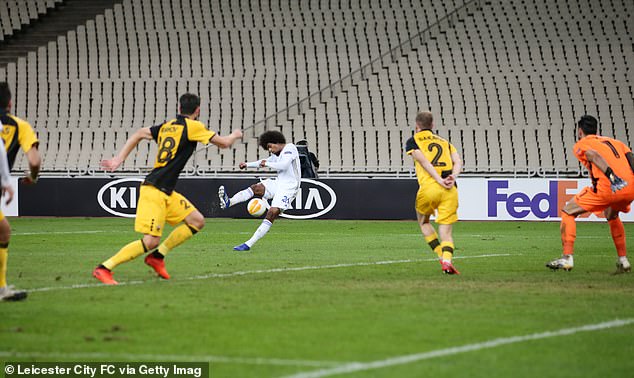 AEK boss Massimo Carrera brought on Tankovic at half-time and within three minutes, the Swede had scored as he accelerated on to Petros Mantalos pass and shot beyond Schmeichel.

Within 60 seconds, he should have equalised. Once again Mantalos provided the inspiration with a spectacular turn and lofted pass on to the chest of Tankovic, who controlled the ball well only to volley over.

Leicester regained their composure and continued to threaten. Choudhury’s effort from the edge of the area was just about scrambled away by Tsintotas, who looked on helplessly moments afterwards as Under’s curling left-foot shot rebounded off the post. 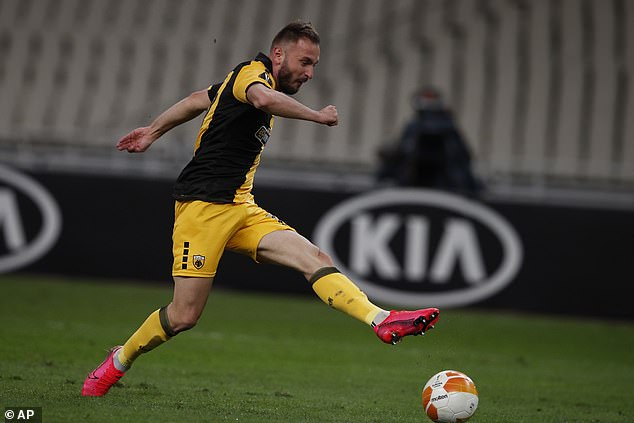 Shopify blows past Wall Street estimates in the third quarter

Shopify blows past Wall Street estimates in the third quarter