An infant boy handed in desperation to a soldier across an airport wall in the chaos of the American evacuation of Afghanistan has been found and was reunited with his relatives in Kabul on Saturday.

Sohail Ahmadi was just two months old when he went missing on August 19 as thousands of people rushed to leave Afghanistan as it fell to the Taliban.

Following an exclusive Reuters story published in November with his pictures, the baby was located in Kabul where a 29-year-old taxi driver named Hamid Safi had found him in the airport and took him home to raise as his own.

After more than seven weeks of negotiations and pleas, and ultimately a brief detention by Taliban police, Safi finally handed the child back to his jubilant grandfather and other relatives still in Kabul.

They said they would now seek to have him reunited with his parents and siblings who were evacuated months ago to the United States. 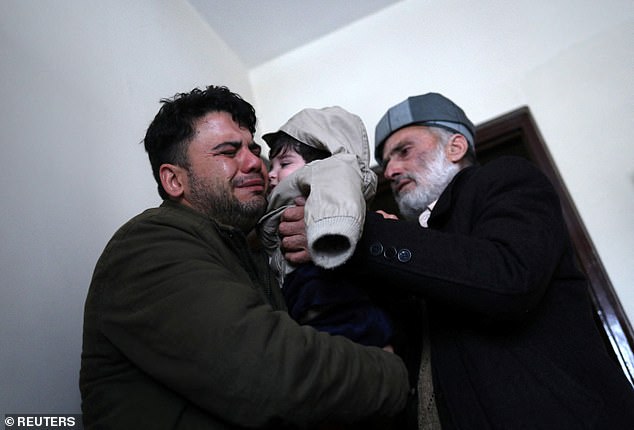 Sohail Ahmadi was just two months old when he went missing on August 19 as thousands of people rushed to leave Afghanistan as it fell to the Taliban. Taxi driver Hamid Safi (left), 29, cries as he hands baby Sohail to his grandfather 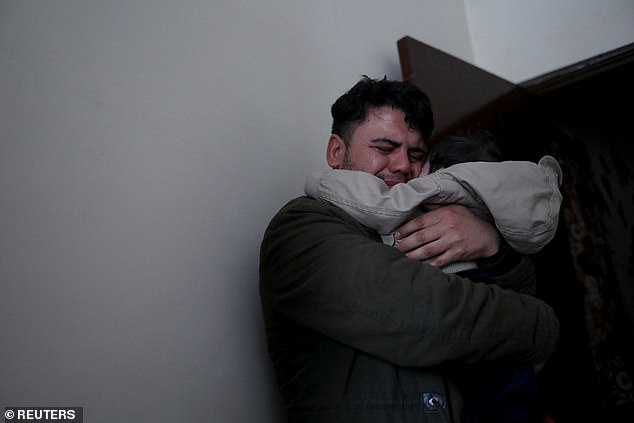 Following an exclusive Reuters story published in November with his pictures, the baby was located in Kabul where a 29-year-old taxi driver named Hamid Safi (pictured) had found him in the airport and took him home to raise as his own 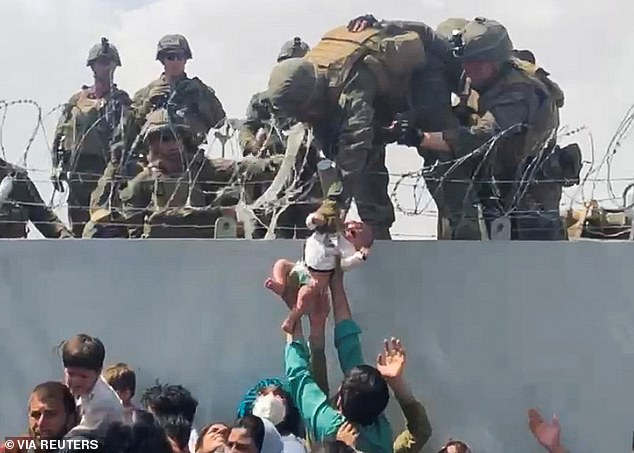 Pictured: Baby Sohail is handed over to US troops over the perimeter wall of the airport to be evacuated 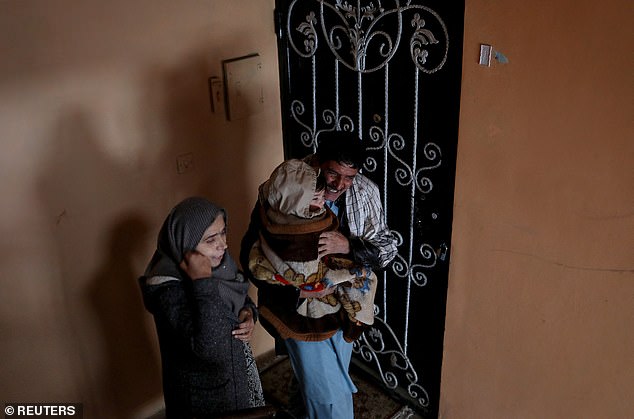 During the tumultuous Afghan evacuation over the summer, Mirza Ali Ahmadi – the boy’s father who had worked as a security guard at the U.S. embassy – and his wife Suraya feared their son would get crushed in the crowd as they neared the airport gates en route to a flight to the United States.

Ahmadi told Reuters in early November in his desperation that day, he handed Sohail over the airport wall to a uniformed soldier who he believed to be an American, fully expecting he would soon make it the remaining 5 meters (15 feet) to the entrance to reclaim him.

Just at that moment, Taliban forces pushed the crowd back and it would be another half an hour before Ahmadi, his wife and their four other children were able to get inside. 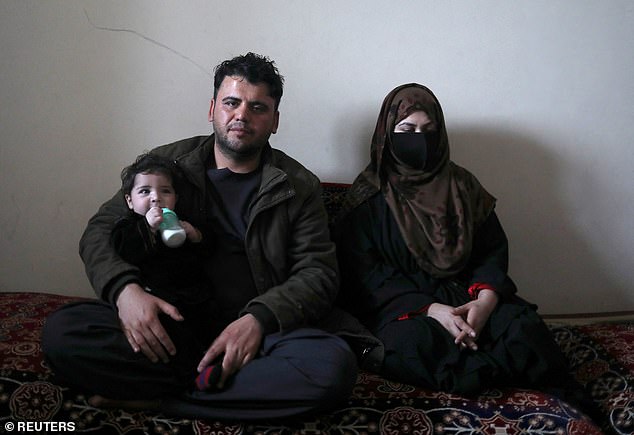 Hamid Safi, a 29-year-old taxi driver who had found baby Sohail Ahmadi in the airport, holds Sohail as he poses with his wife Farima Safi in his house in Kabul 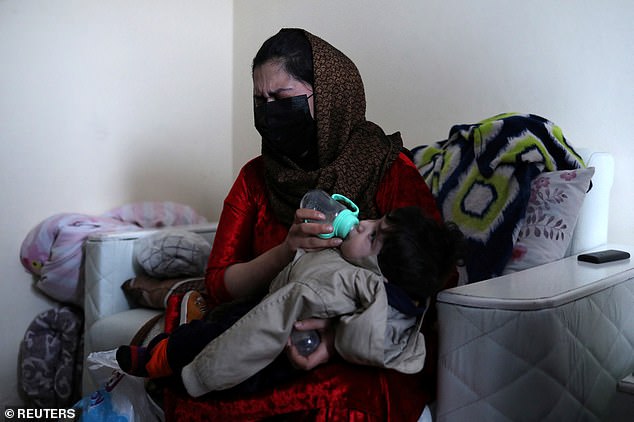 Farima Safi, wife of Hamid Safi, a taxi driver who had found baby Sohail Ahmadi in the airport, weeps as she feeds Sohail at her house in Kabul 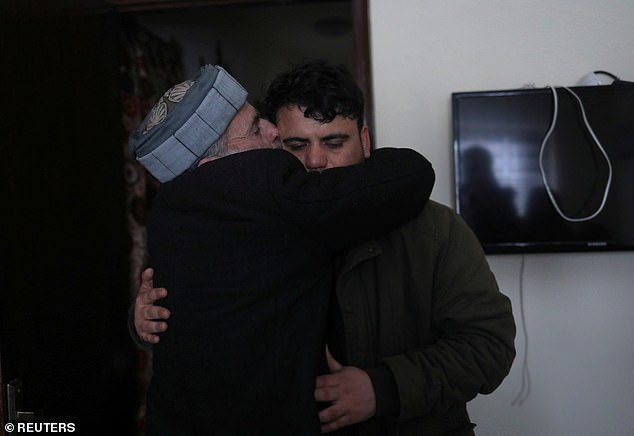 Hamid Safi, a 29-year-old taxi driver who had found baby Sohail Ahmadi in the airport, is kissed by Sohail’s grandfather Mohammad Qasem Razawi at his home in Kabul

But by then the baby was nowhere to be found.

Ahmadi said he searched desperately for his son inside the airport and was told by officials that he had likely been taken out of the country separately and could be reunited with them later.

The rest of the family was evacuated – eventually ending up at a military base in Texas. For months they had no idea where their son was.

The case highlights the plight of many parents separated from their children during the hasty evacuation effort and withdrawal of U.S. forces from the country after a 20-year war. read more

With no U.S. embassy in Afghanistan and international organizations overstretched, Afghan refugees have had trouble getting answers on the timing, or possibility, of complex reunifications like this one. 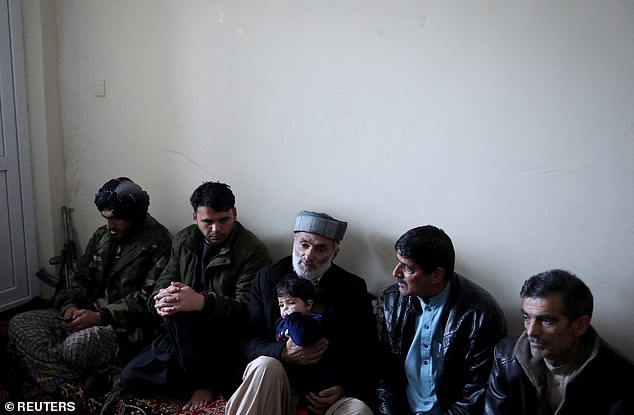 Mohammad Qasem Razawi, grandfather of baby Sohail Ahmadi, holds him at the house of Hamid Safi, a 29-year-old taxi driver who had found the baby in the airport

On the same day Ahmadi and his family were separated from their baby, Safi had slipped through the Kabul airport gates after giving a ride to his brother’s family who were also set to evacuate.

Safi said he found Sohail alone and crying on the ground. After he said he unsuccessfully tried to locate the baby’s parents inside, he decided to take the infant home to his wife and children. Safi has three daughters of his own and said his mother’s greatest wish before she died was for him to have a son.

In that moment he decided: ‘I am keeping this baby. If his family is found, I will give him to them. If not, I will raise him myself,’ he told Reuters in an interview in late November. 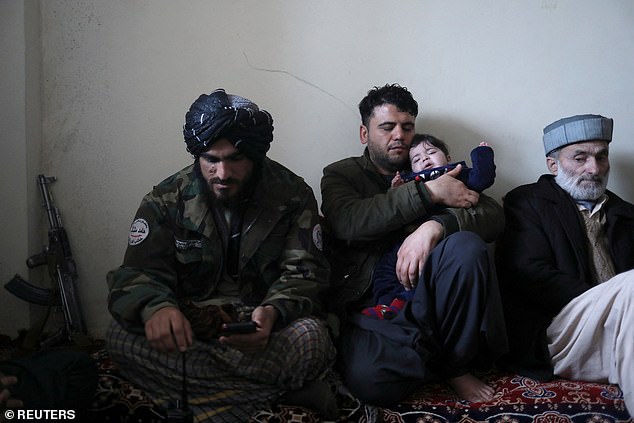 Hamid Safi, a 29-year-old taxi driver who had found baby Sohail Ahmadi in the airport, holds Sohail next to Sohail’s grandfather Mohammad Qasem Razawi and a Taliban representative

Safi told Reuters that he took him to the doctor for a check-up after he was found and quickly incorporated the child into his family. They called the baby Mohammad Abed and posted pictures of all the children together on his Facebook page.

After the Reuters story about the missing child came out, some of Safi’s neighbors – who had noticed his return from the airport months earlier with a baby – recognized the photos and posted comments about his whereabouts on a translated version of the article.

Ahmadi asked his relatives still in Afghanistan, including his father-in-law Mohammad Qasem Razawi, 67, who lives in the northeastern province of Badakhshan, to seek out Safi and ask him to return Sohail to the family.

Razawi said he traveled two days and two nights to the capital bearing gifts – including a slaughtered sheep, several pounds of walnuts and clothing – for Safi and his family.

But Safi refused to release Sohail, insisting he also wanted to be evacuated from Afghanistan with his family. Safi’s brother, who was evacuated to California, said Safi and his family have no pending applications for U.S. entry.

The baby’s family sought help from the Red Cross, which has a stated mission to help reconnect people separated by international crises, but said they received little information from the organization. A spokesperson for the Red Cross said it does not comment on individual cases.

Finally, after feeling they had run out of options, Razawi contacted the local Taliban police to report a kidnapping. Safi told Reuters he denied the allegations to the police and said he was caring for the baby, not kidnapping him.

The complaint was investigated and dismissed and the local police commander told Reuters he helped arrange a settlement, which included an agreement signed with thumbprints by both sides. Razawi said the baby’s family in the end agreed to compensate Safi around 100,000 Afghani ($950) for expenses incurred looking after him for five months.

‘The grandfather of the baby complained to us and we found Hamid and based on the evidence we had, we recognized the baby,’ said Hamid Malang, the chief area controller of the local police station. ‘With both sides in agreement, the baby will be handed over to his grandfather,’ he said on Saturday.

In the presence of the police, and amid lots of tears, the baby was finally returned to his relatives.

Razawi said Safi and his family were devastated to lose Sohail. ‘Hamid and his wife were crying, I cried too, but assured them that you both are young, Allah will give you male child. Not one, but several. I thanked both of them for saving the child from the airport,’ Razawi said.

The baby’s parents told Reuters they were overjoyed as they were able to see with their own eyes the reunion over video chat.

‘There are celebrations, dance, singing,’ said Razawi. ‘It is just like a wedding indeed.’

Now Ahmadi and his wife and other children, who in early December were able to move off the military base and resettle in an apartment in Michigan, hope Sohail will soon be brought to the United States.

‘We need to get the baby back to his mother and father. This is my only responsibility,’ his grandfather said. ‘My wish is that he should return to them.’

Watch.. Iraqi deputies close to the protesters head to the new parliament by tuktuk | Politics news