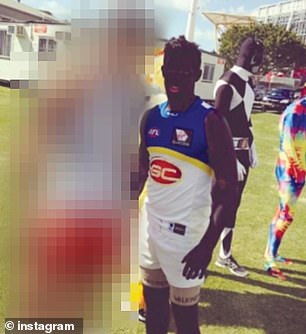 The photos of Gold Coast Suns players Leigh Osborne and Alex Sexton were taken at a Wacky Wednesday event to celebrate the end of the AFL season in 2013.

Sexton was dressed as an Indigenous teammate and Osborne was imitating Joel Wilkinson – who is of Nigerian descent.

Wilkinson said he was ‘mortified and angry’ and reported the incident, but claims nothing was done.

Both Osborne and Sexton have apologised to Wilkinson for their outfits.

Wilkinson said Osborne told him beforehand he wanted to impersonate him – but only by mimicking his training gear and equipment. 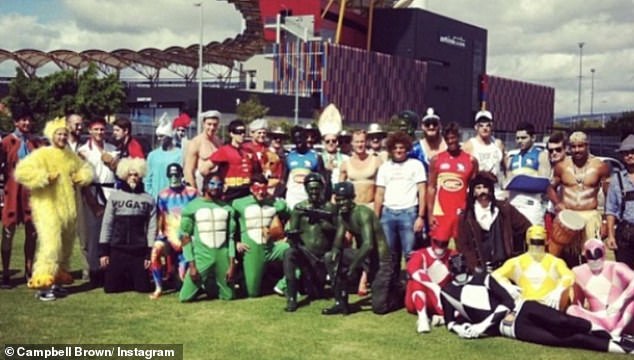 Osborne (pictured centre in blue and white shirt) and Alex Sexton painted themselves in blackface at a Wacky Wednesday event to celebrate the end of the season in 2013. His teammate Joel Wilkinson is pictured shirtless far right with a drum

‘I tried to stop it during the event, I thought when we returned from the event they would be held accountable by the club, the Gold Coast Suns, but nothing happened to my dismay.’

He expected players and officials to be reprimanded and photos of the outfits shared on social media to be removed – but claimed it didn’t happen.

‘It [the response to his complaints about the blackface incident] very much was a representation of my whole career in the AFL and how they never cared or put in place the systems to protect my wellbeing against racism,’ he said.

After years of frustration, Wilkinson decided to release key documents to the media – including the photos and a legal warning he received.

Wilkinson eventually filed a lawsuit in May 2018 against the AFL, four individuals, the Suns and six other teams claiming racial discrimination and religious vilification. 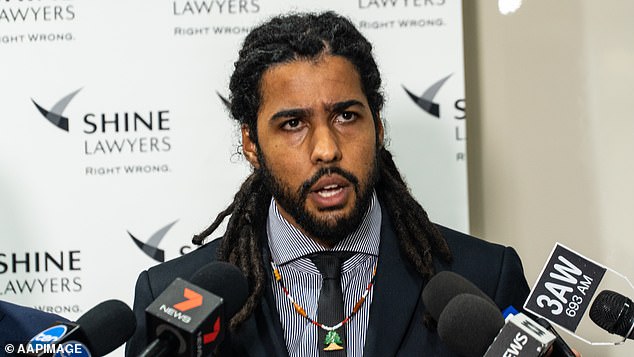 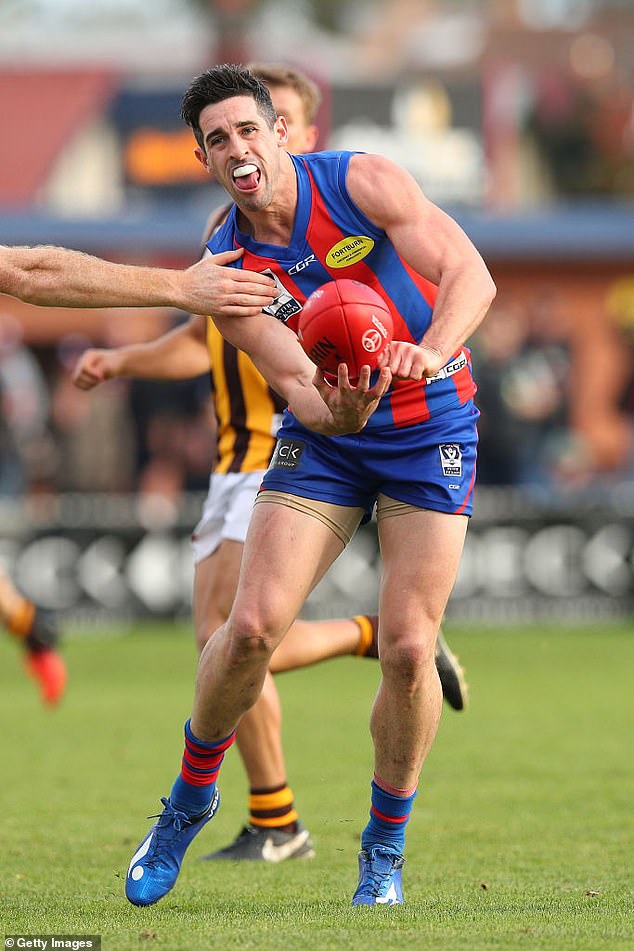 Leigh Osborne pictured in Port Melbourne colours in 2017. He said he only found out about his ex-teammate’s complaint to the Human Rights Commission years later in 2018 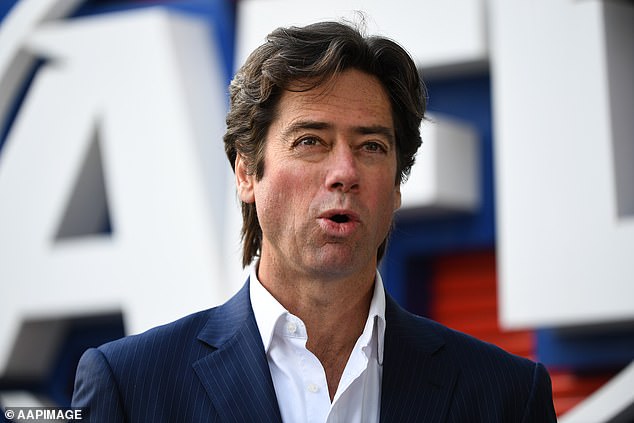 Pictured: AFL CEO Gillon McLachlan. The league said blackface ‘is never acceptable in any forum or at any time’

He withdrew the complaint in 2019.

The Suns said in a statement Sexton and an Indigenous teammate had agreed to dress up as one another and paint each other’s skin black and white respectively.

‘The Suns view the choice of outfits in the photo and on that day to be inappropriate, unacceptable and regrettable,’ a team spokesman said.

Sexton has apologised for the incident and said he accepted his decision as offensive and inappropriate.

‘At the time I just saw it as two housemates dressing up as each other,’ he said.

‘Looking back, I regret that decision. While I meant no harm, I certainly accept today that it was inappropriate and I now understand how upsetting and offensive my actions were.’ 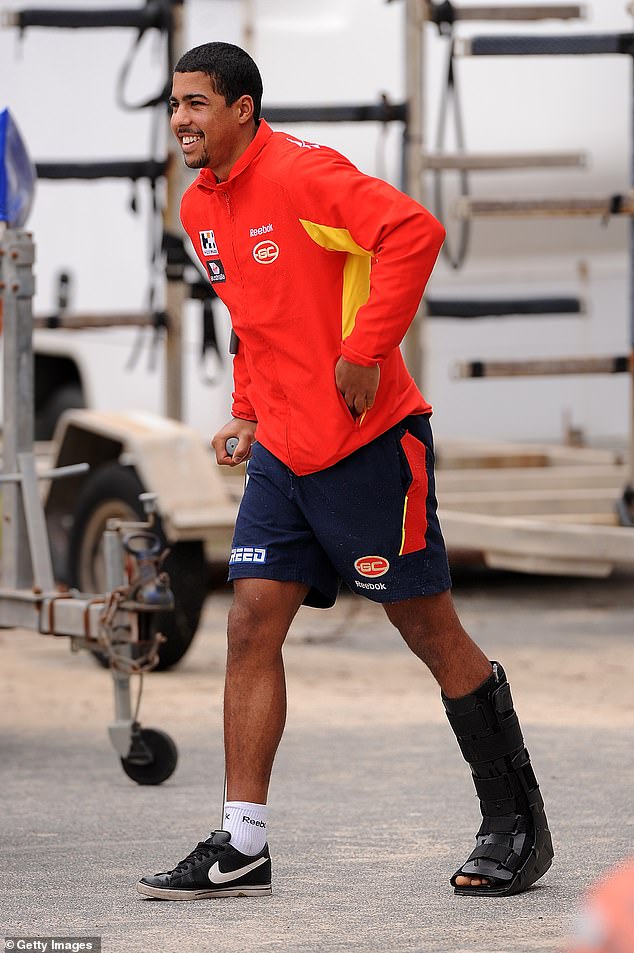 Osborne has also responded to the release of the photos by admitting he understood what he did ‘was wrong’.

He also claimed Wilkinson never made an issue with his costume on the day and that he only found out about the complaint to the Human Rights Commission years later in 2018.

‘I never meant to hurt or ridicule him but looking back now I understand it was wrong,’ he said.

‘I was a pretty young bloke in 2013 and have come to learn a lot more about these things since then and I am sorry to have caused any trouble or hurt and obviously wouldn’t ever do it again.’

The AFL is committed to continuing the fight against racism in our sport and to continuously improving our processes to deal with discrimination of any kind.

Racism is not, and never will be, acceptable in our game and there are no circumstances where racism can be allowed to go unchecked

We regret that any person suffers racism in our game.

We acknowledge and understand the impact that racism had on Joel Wilkinson during the course of his AFL career, including a number of serious incidents including where Joel was vilified by an opposition player who was later suspended for six weeks and fined under the AFL’s vilification rules

A separate incident where Joel was racially abused by a supporter in the crowd was also investigated by the AFL.

We regret that Joel suffered racism in these incidents and acknowledge the hurt caused to him.

The AFL is clear that any use of blackface is never acceptable in any forum or at any time.

While the AFL was not aware of the 2013 end-of-season blackface incident until 2018 shortly before Joel detailed the incident in his complaint to the Human Rights Commission, one thing that is clear is that the behaviour is wrong and is behaviour that we would never accept or condone.

Joel Wilkinson was a friend as well as a teammate who I liked and respected.

When I attended the 2013 Mad Monday type event dressed as Joel I did so with the loan of his jumper and with his agreement after I had asked him whether it was okay to dress up as him.

Joel never raised any issue about it with me on the day.

He was pretty strikingly dressed himself and I just thought he went dressed as a native American Indian.

We joked around at the start of the day and we all posed for a photograph.

Then we spent the day drinking … that’s how those Mad Mondays used to go.

A couple of weeks later, Wilko and I went to Las Vegas together for our end-of-season trip. We had a great time in Las Vegas.

Since then, we have seen each other from time to time but he’s never mentioned the Wacky Wednesday event to me.

The first time I became aware that Joel was upset about what I did was when I found out about his complaint to the Human Rights Commission years later in 2018.

As soon as I found out about it, I contacted him and apologised to him for my actions and said I was sorry for what I had done in 2013.

I never meant to hurt or ridicule him but looking back now I understand it was wrong.

I was a pretty young bloke in 2013 and have come to learn a lot more about these things since then and I am sorry to have caused any trouble or hurt and obviously wouldn’t ever do it again.

Is it possible to change the color of the eyes?