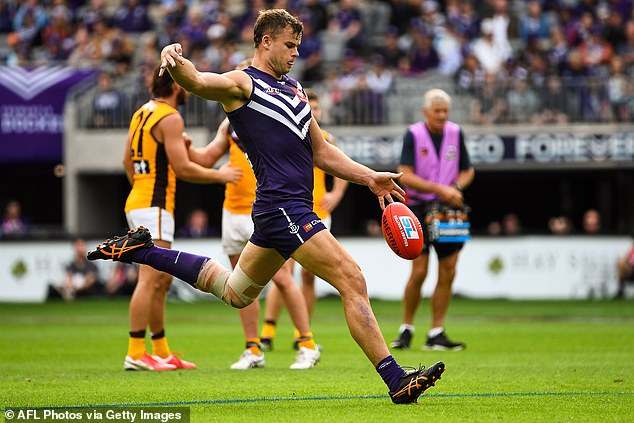 AFL commentator appears to drop the F-bomb during crucial moment of clash – so what word did you hear?

An AFL commentator has left some viewers stunned as they believed he dropped the F-bomb during a call of Sunday’s Fremantle-Hawthorn game in Perth.

Experienced caller Anthony Hudson was commentating when Fremantle ruckman Sean Darcy slotted a critical goal from a set shot in the fourth quarter to bolster the Dockers’ lead in a close-fought game.

There was confusion among fans who tuned into Fox Footy, who thought they heard Hudson shout ‘F***!’ as Darcy sent the ball flying through the goal posts.

But others believed the 50-year-old commentator said ‘thud’ or ‘thump’ as he described ‘big man’ Darcy converting his set shot.

‘I thought Anthony Hudson swore then!’ one fan wrote on Twitter.

‘The thump sounded like a well-known four lettered swear word that starts with f and ends in k.’

Another viewer question: ‘Did Anthony Hudson just drop the F-bomb?’

Hudson went on to say Darcy’s kick was a ‘big blow’ as Fremantle fans at the stadium cheered.

The Dockers defeated the Hawks 96 to 81.

Bitcoin Price Below $60k Might Be a Great Accumulation Phase! 2021