An AFL star has revealed that his childhood home was torn to shreds by winds of up to 170km/h when Tropical Cyclone Seroja tore through Western Australia.

West Coast forward Jamie Cripps posted heartbreaking photos on Instagram on Tuesday evening that showed the remains of his family’s dilapidated farmstead in Northampton on the state’s mid-north coast.

‘Sad to see my old family home destroyed. Thinking of everyone back home in Northampton/Kalbarri,’ he wrote in the caption.

The two small towns were the hardest hit by the category three storm when it made landfall at about 8pm on Sunday, with about 70 homes and businesses damaged – with roofs torn off houses. 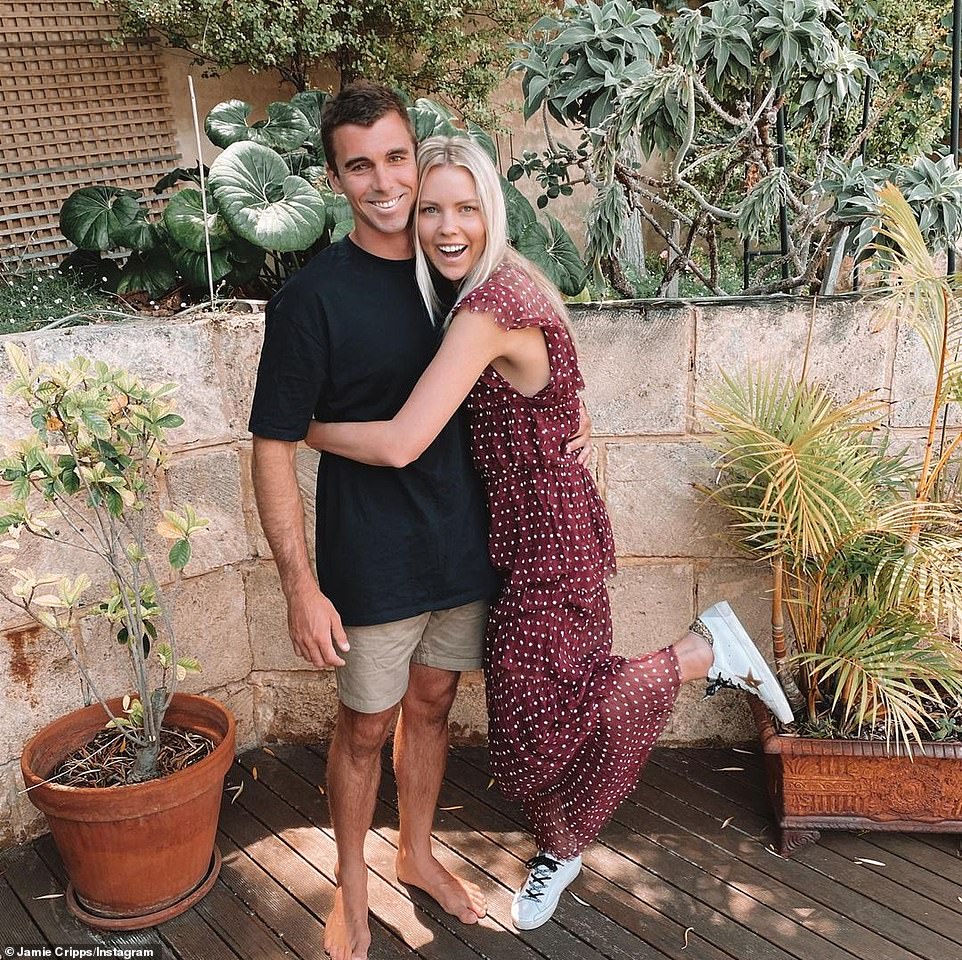 Pictured: Jamie Cripps with his wife Liv Stanley. The couple live in Perth and have one son, Reif, who is one-year-old 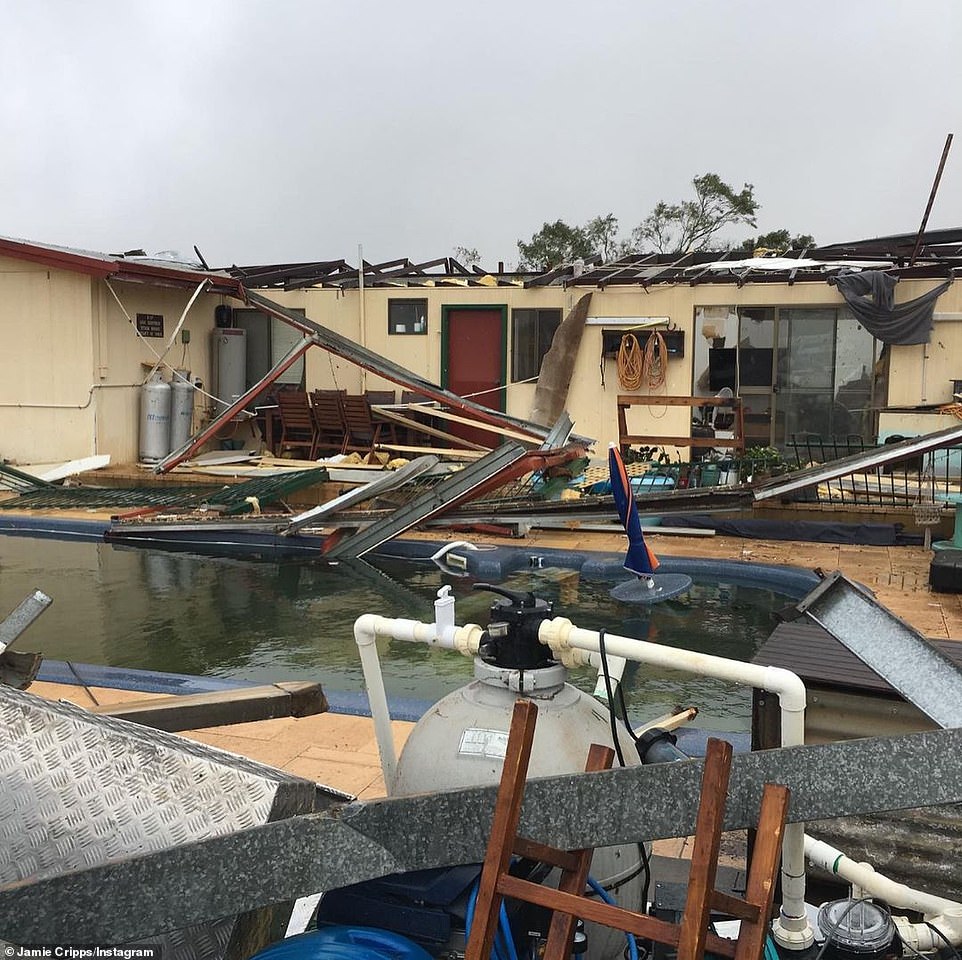 Pictured: Jamie Cripps’ family home after cyclone Seroja tore through the region. The pool is covered in debris and guttering is on the floor

Photos shared by the 28-year-old showed beams and insulation falling from the ceiling after the roof was ripped off in the wild storm.

Fences were strewn across the yard, windows were smashed, and furniture littered the ground.

‘The boys were a bit sad to see somewhere you grew up like that, but the good think is no one was hurt,’ Jamie’s mother Lisa – who lives in the house – told The West Australian.

A family friend replied to the post: ‘Lots of good memories in this home, so many kiddies have grown up in this house. Hope your okay.’ 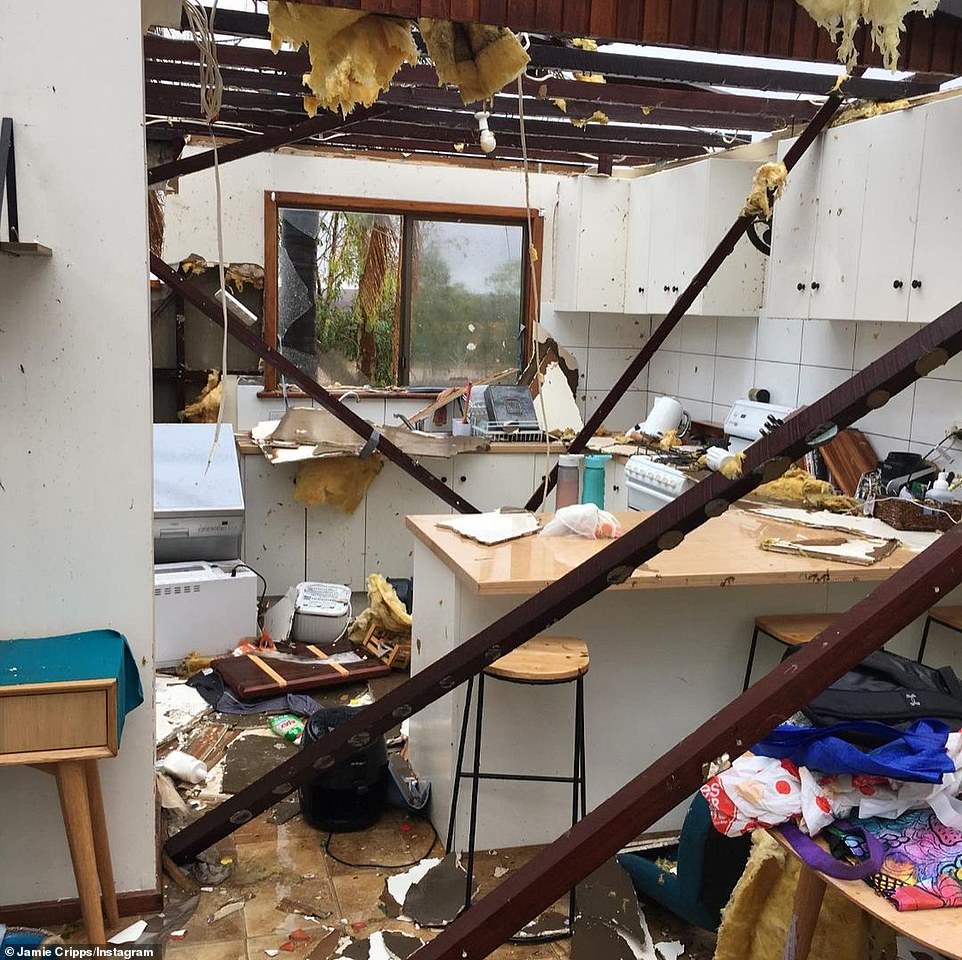 Pictured: The Cripps family kitchen. Insulation can be seen falling from the ceiling after the roof was torn off in gusts of up to 170km/h 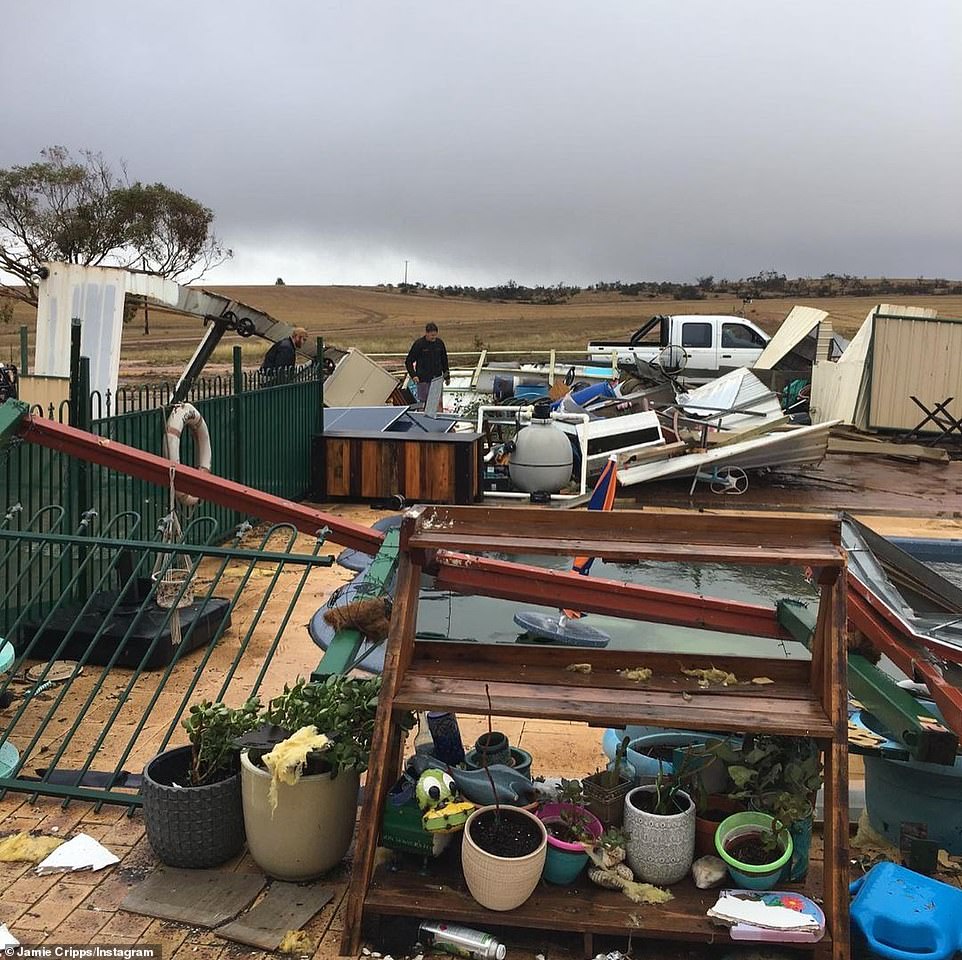 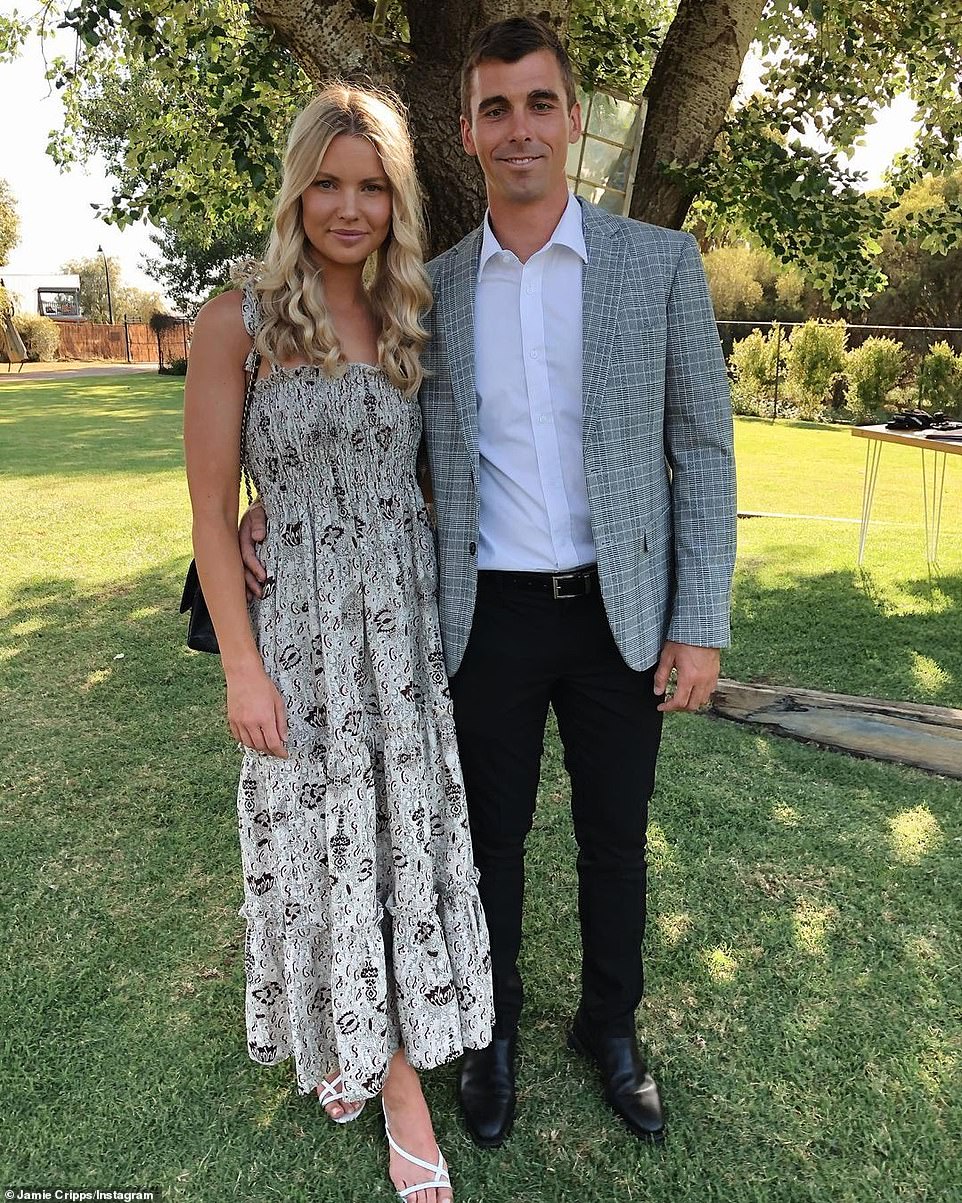 Cripps (pictured with his partner Liv) is one of a number of players from small towns in north-west parts of the state, including teammate Josh Kennedy

Cripps is one of a number of players from small towns in north-west parts of the state, including teammate Josh Kennedy.

West Coast defender Jeremy McGovern said teammates were quick to offer their support to the pair.

‘A lot of people they know have been affected and it is terrible,’ he said.

‘You hate seeing it. It is a bit of a freak cyclone. I was speaking to Cripper and he said it was 40 years ago since the last cyclone went through. You don’t really expect it. They are all a bit shaken up, up there and I wish them all the best.’

Power was yet to be restored to about 29,500 homes and businesses late on Tuesday as authorities continued to assess the damage from the devastating storm. 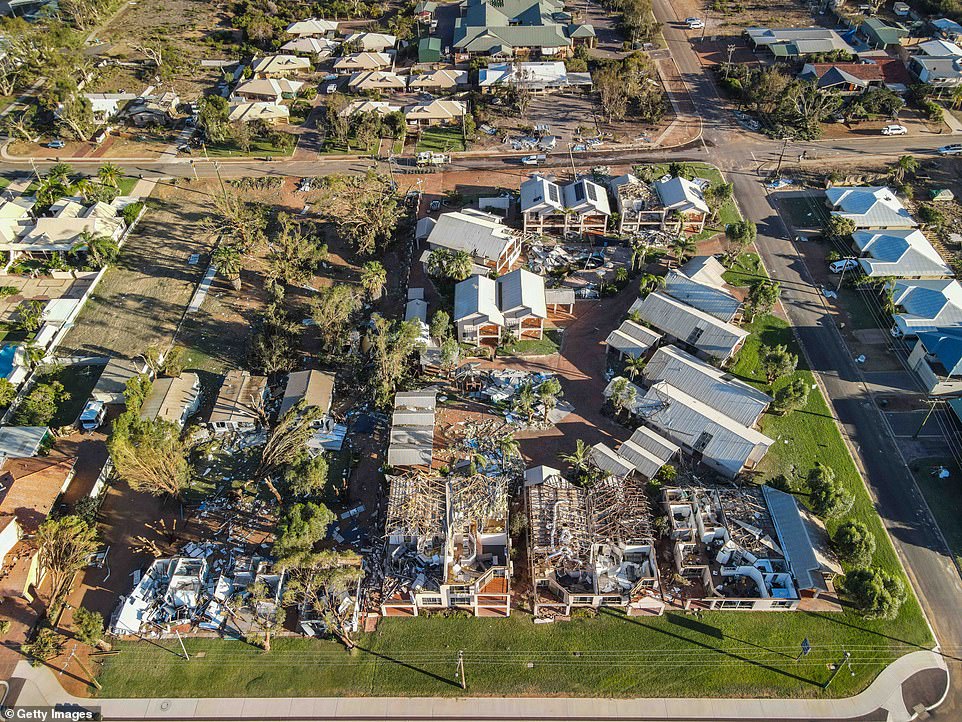 Pictured: An aerial view of damaged buildings at Pelican Shore Villas is seen on April 13, 2021 in Kalbarri, Western Australia 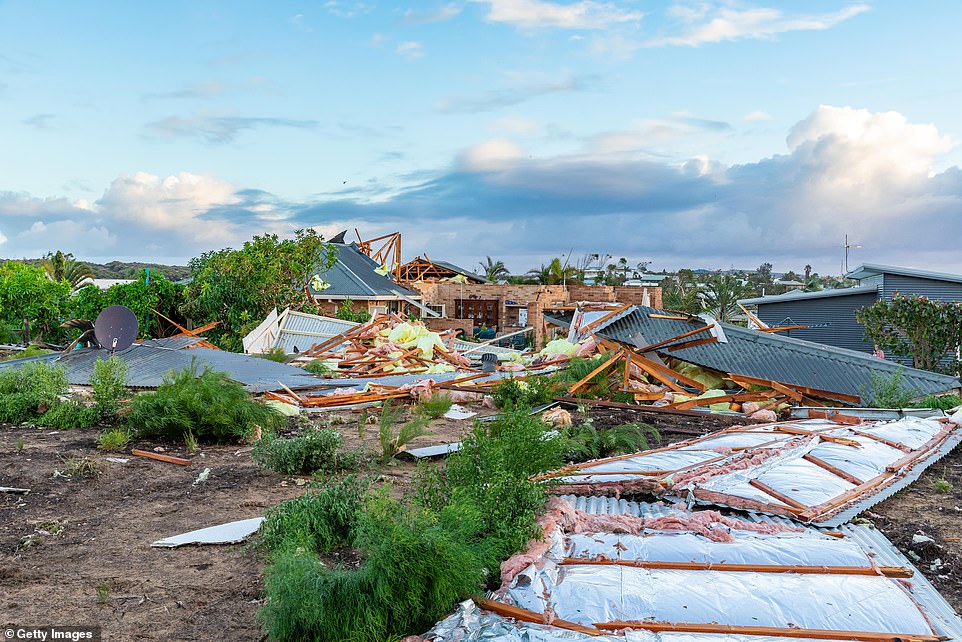 Damaged buildings are seen on April 12 in Kalbarri, Australia. The tourist town of Kalbarri on Western Australia’s mid-west coast was hit by Cyclone Seroja on April 11 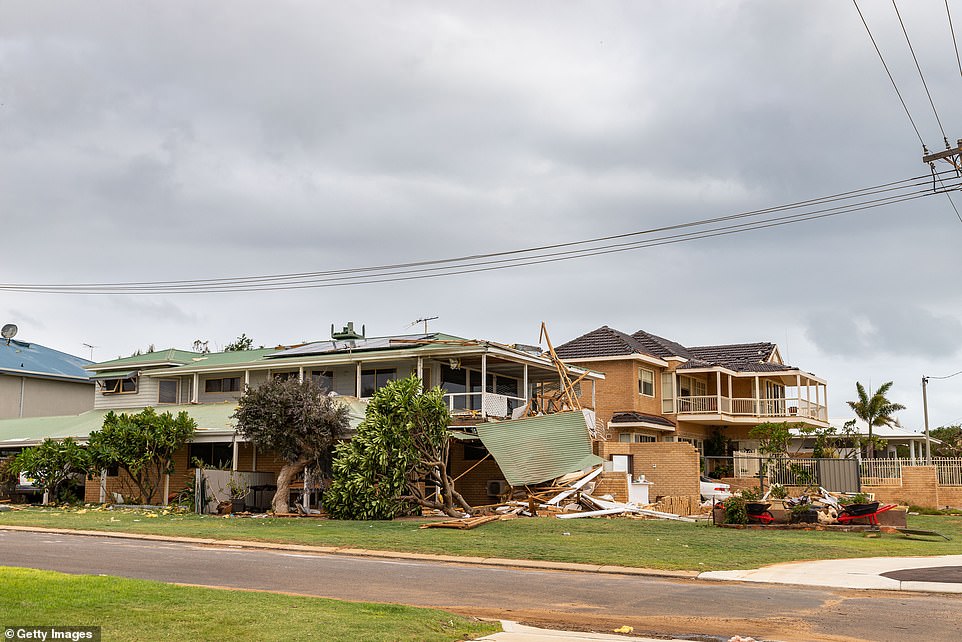 Pictured: Damaged buildings along the Kalbarri foreshore. Winds reached up to 170km per hour, with about 70 percent of Kalbarri’s buildings effected

Western Power said there were outages across the Midwest and Central Wheatbelt in an area spanning more than 700km long and 150km wide.

About 130 poles have been damaged on the transmission side of the network alone.

Premier Mark McGowan said the devastation looked like a ‘war zone’ and was readily visible from the air, with buildings, businesses and farms damaged and power poles snapped off.

‘It shows the enormous power of the cyclone,’ he said. 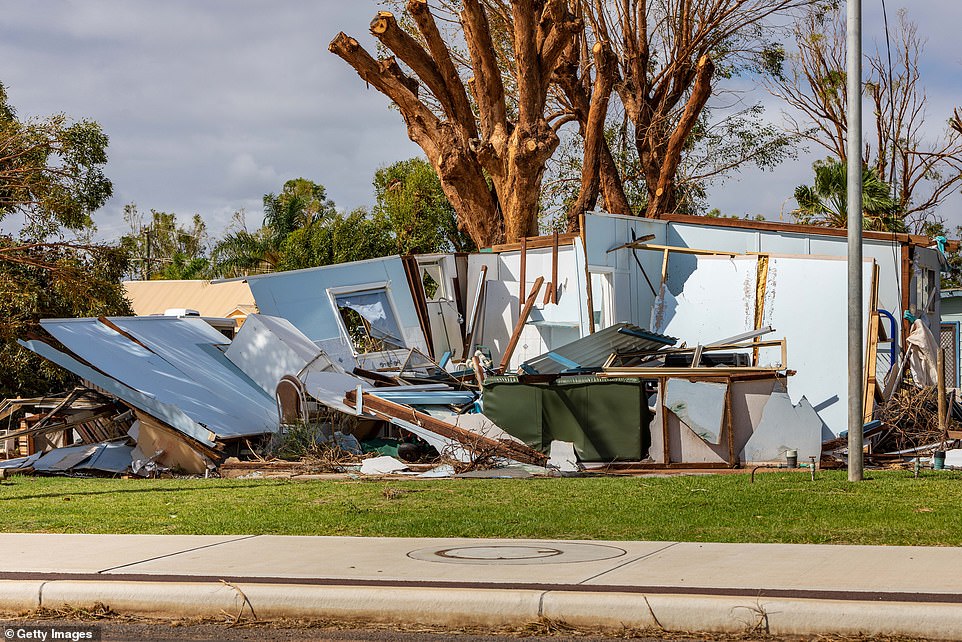 Premier Mark McGowan said the devastation looked like a ‘war zone’ and was readily visible from the air, with buildings, businesses and farms damaged and power poles snapped off 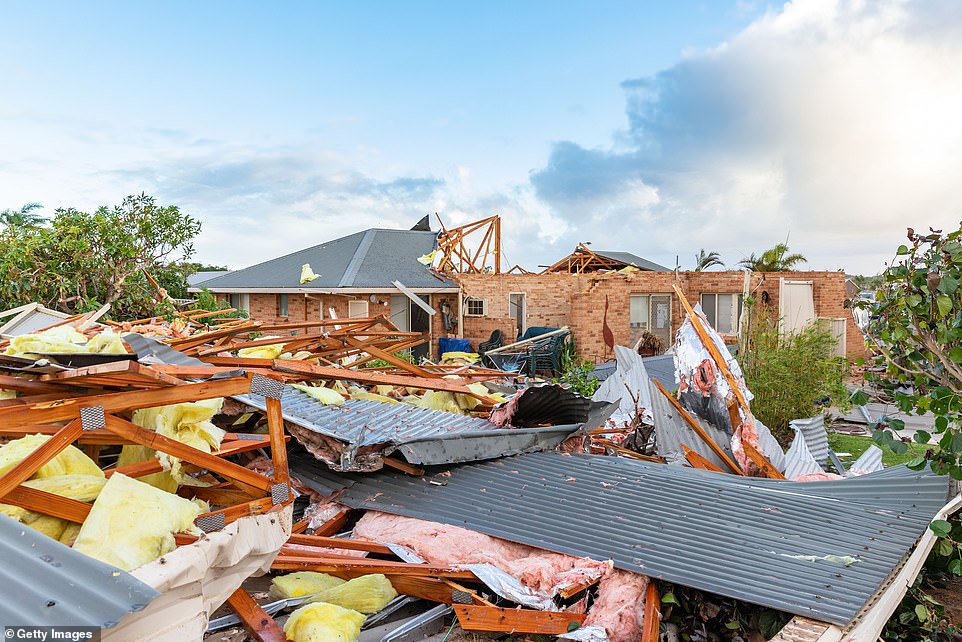 Many residents remain without power or telecommunications as clean-up operations begin. Pictured: Damaged and destroyed homes 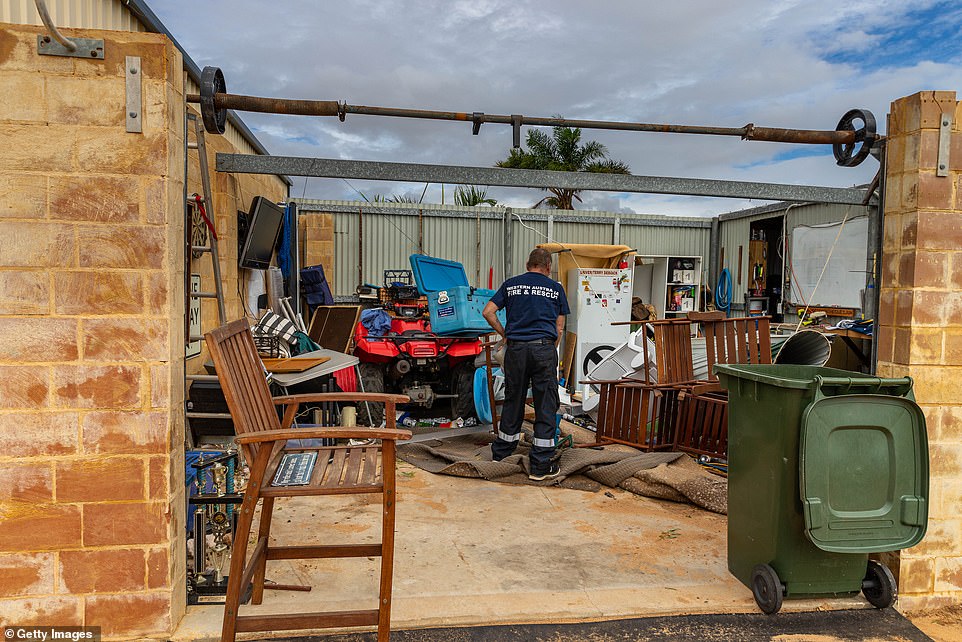 Pictured: An emergency services worker surveys the damage at his own property on April 12 in Kalbarr, Western Australia

‘We are very fortunate that in the course of this cyclone, there was no serious injury or death.’

Vanessa Leggo, another victim of Seroja, told of how she tried desperately to protect her children as winds tore the room of their holiday rental apart.

When the windows exploded across the room, the mother-of-two grabbed her children and huddled with them under the stairs for hours.

‘I could hear the flapping of what I thought was doors, but it was the roof lifting up and down,’ she told the publication.

Her son, seven-year-old Jet, said the cyclone was the most ‘scary thing’ he had ever seen. 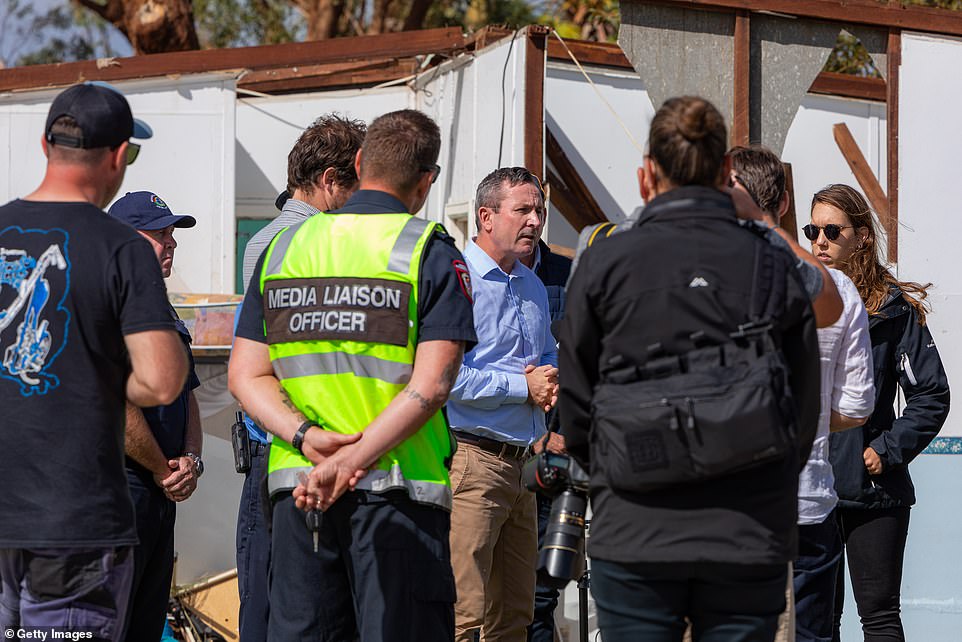 Pictured: WA Premier Mark McGowan speaks to media on April 13, 2021 in Kalbarri. ‘We are very fortunate that in the course of this cyclone, there was no serious injury or death,’ he said 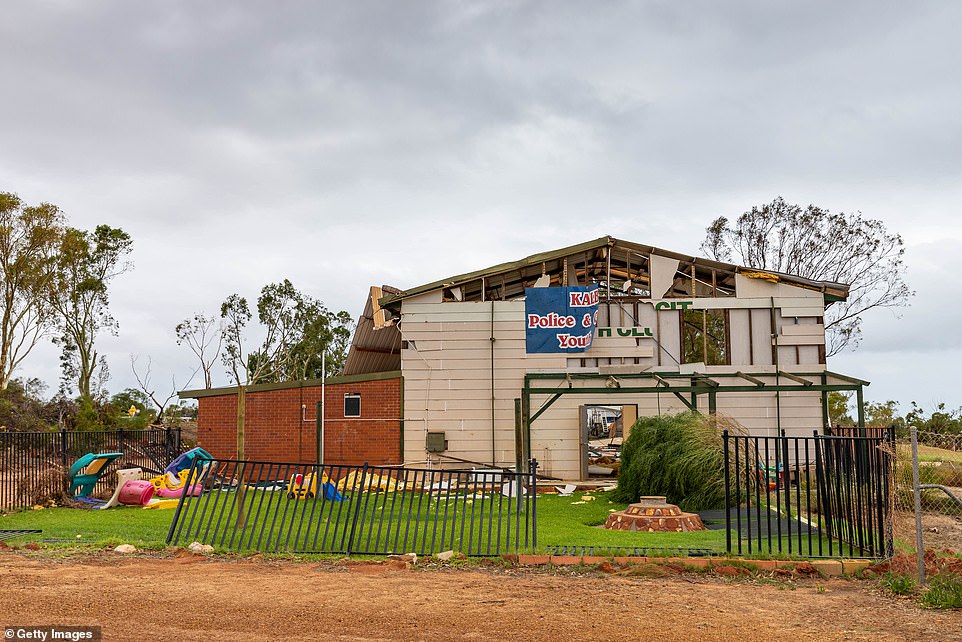 Premier Mark McGowan said: ‘This was the one in 50-year event, an extraordinary cyclone which caused massive amounts of damage throughout this community and throughout this region’ 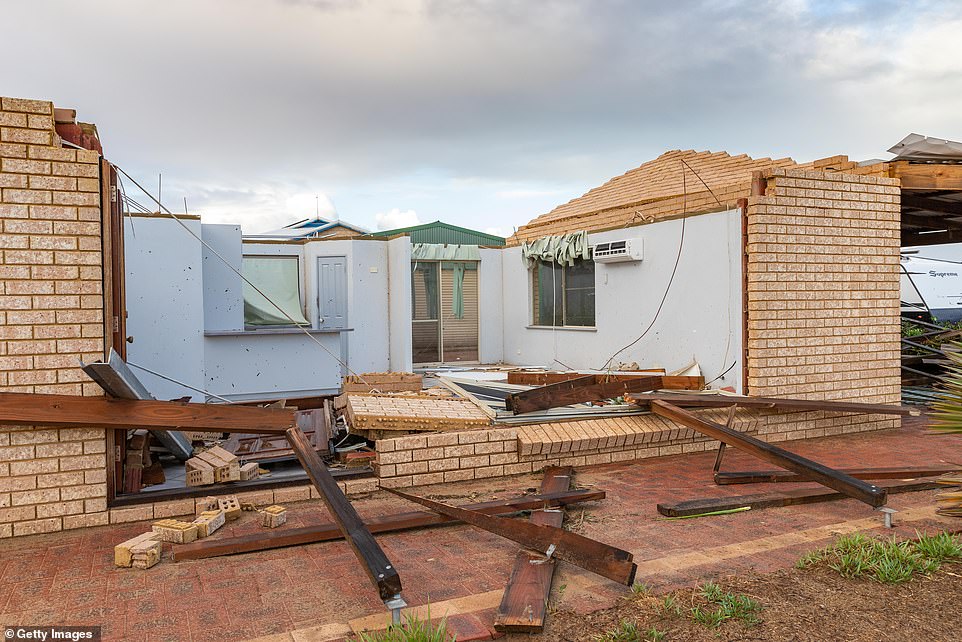 Pictured: Damaged buildings on April 12 in Kalbarri. The Premier said the clean-up would take a ‘massive effort’ but the people of the region were extremely resilient and were dealing with the disaster in good spirits

Yvonne McKenzie watched Seroja destroy their home with her two sons, as they watched the neighbour’s roof fly past their window.

When Mr McGowan asked if she was okay, she couldn’t hold back the tears.

‘We’re okay, but there’s a lot of people very bad off. It’s heartbreaking. Everywhere we go I just cry,’ she said.

The Premier said the clean-up would take a ‘massive effort’ but the people of the region were extremely resilient and were dealing with the disaster in good spirits. 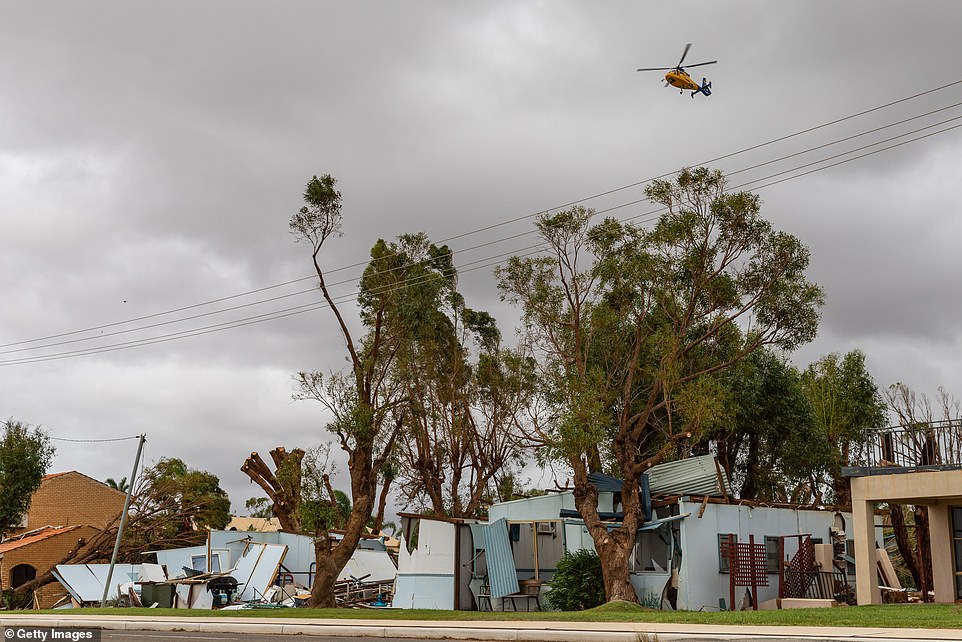 Pictured: A helicopter at the scene where cyclone Seroja tore through in Kalbarri, on the mid-north coast of Western Australia 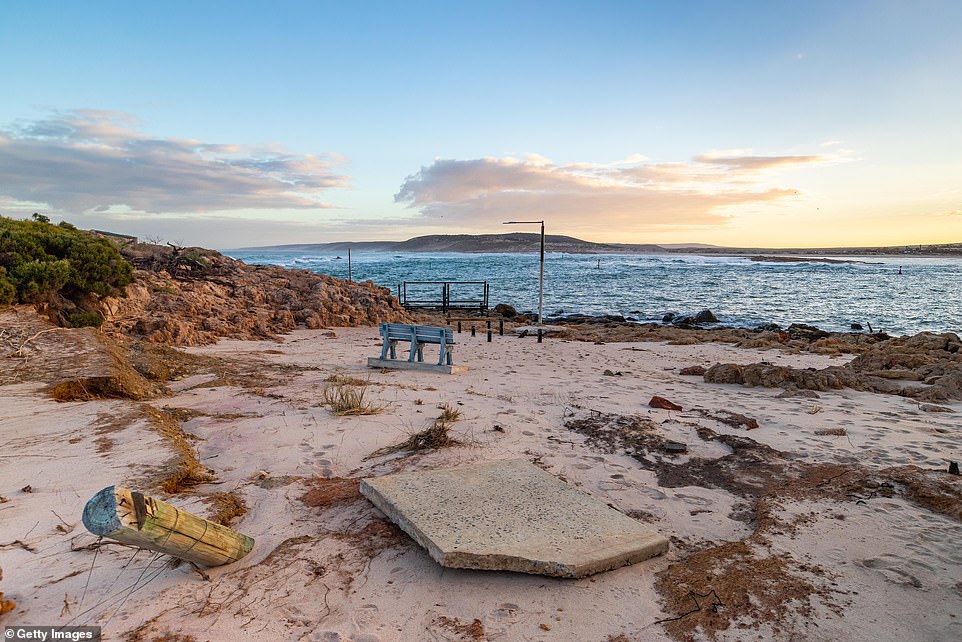 Pictured: Storm damage is seen at Chinaman’s Beach on April 13. A slab of cement can be seen, along with bent power poles 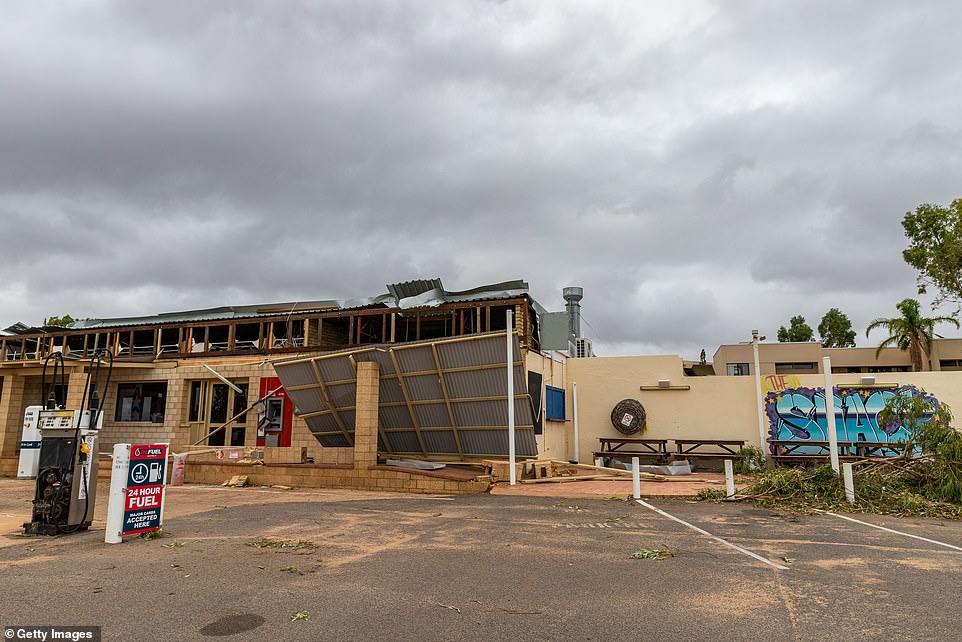 Pictured: The Kalbarri Jetty Seafood Shack on April 12. Mr McGowan said the damage had been a ‘devastating experience for many people’

‘Clearly it has been a very difficult and devastating experience for many people,’ he said.

‘Obviously the reconstruction will take some time, we will work with the commonwealth government, the local government, the emergency funding that will need to be provided to restore particular public assets.

‘I ask people to be patient, it will take some time, the devastation is quite extraordinary.’

Tourists have been asked to steer clear of the area where the combined state and federal disaster relief is expected to exceed the $18 million spent on the Wooroloo bushfires which destroyed 86 homes northeast of Perth in February.