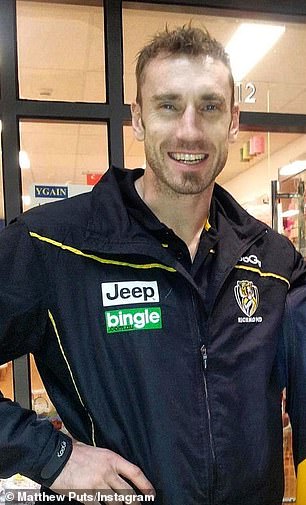 AFL star Shane Tuck was suffering from a severe case of degenerative brain disease before his shock death rocked the footy world six months ago.

The 38-year-old is the third AFL player to be diagnosed with chronic traumatic encephalopathy (CTE), with the condition only able to be identified after death.

‘It was actually quite shocking, the degree of disease he had.’

The diagnosis reportedly gave his wife Katherine, known to friends as Kat, and their two children some kind of solace.

The condition, which can cause depression and suicidal thoughts, can only be detected after death and is linked to repeated head knocks and concussions.

Tuck, who played 173 games for Richmond between 2004 and 2013 and kicked 74 goals, died on July 20 last year after succumbing to a long battle with mental illness. 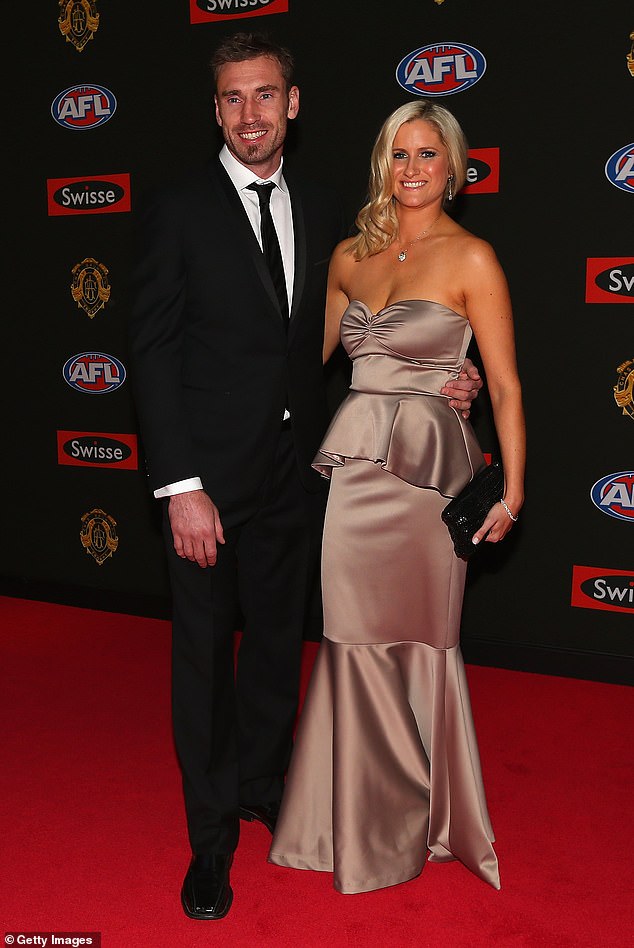 Tuck, pictured with wife Katherine in 2012, is the third AFL player to have been diagnosed with CTE (chronic traumatic encephalopathy), with the condition only able to be identified after death 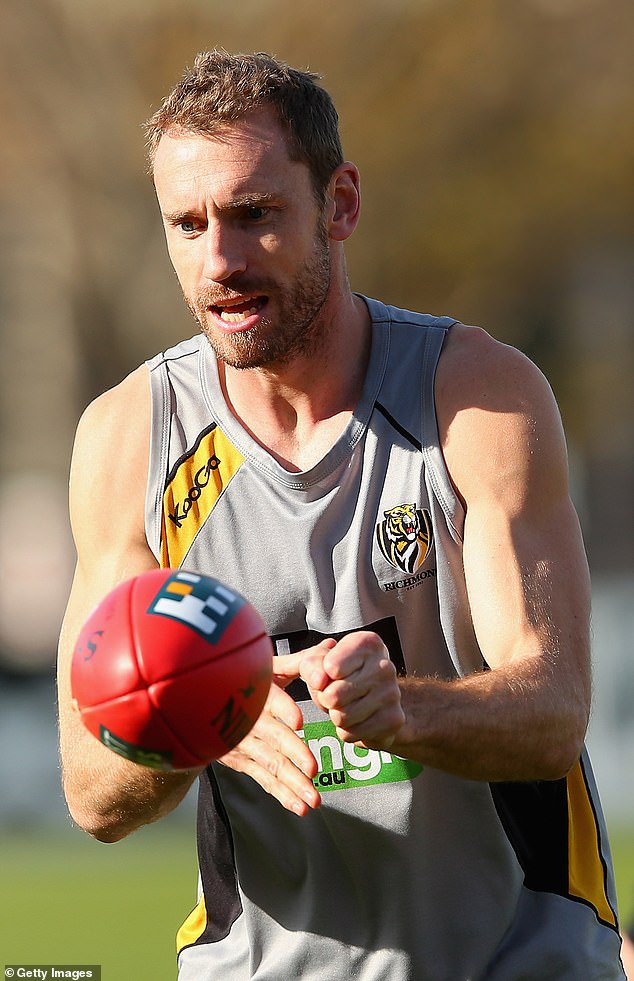 The father-of-two’s death followed the passing of AFL great Danny ‘Spud’ Frawley who died when his car slammed into a tree near Ballarat, Victoria, on September 9, 2019.

The 56-year-old had been vocal about his battle with depression in the lead up to his death and his loved ones had noticed a change in his behaviour.

It was later found that Frawley had Stage Two CTE.

Graham ‘Polly’ Farmer was the first AFL player to be diagnosed with CTE in February last year.

The 84-year-old died in August 2019 after battling Alzheimer’s.

‘Those cases span three generations of players. What’s disturbing is that the worst case is the most recent, and also the youngest,’ Prof Buckland said.

What is chronic traumatic encephalopathy (CTE)?

The symptoms don’t develop immediately after a head injury but they progress years or decades after repeated head trauma.

The disease can only be detected after death through brain tissue analysis.

The condition has been found in former players of American football, ice hockey, soccer, rugby union and others exposed to repeated head injury. 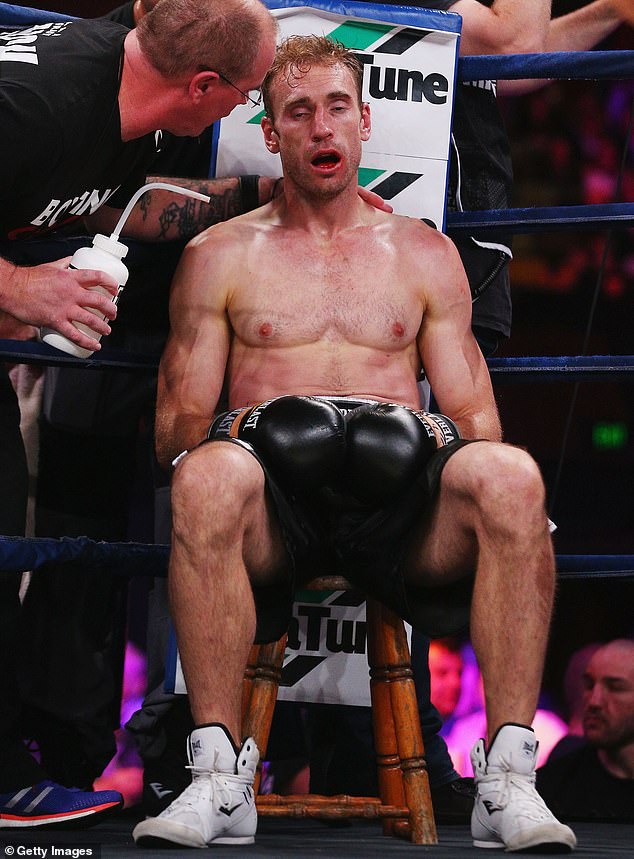 At Tuck’s funeral, his wife Kat said the AFL star’s biggest achievements were his children, Ava and Will.

‘I know you have the peace and contentedness and calm that this life did not afford you … and that your suffering has stopped and that you were so strong,’ Mrs Tuck said.

‘We know that your two biggest achievements were Will and Ava, and I will keep your memory living on in their lives.’

He is the son of former AFL record holder Michael Tuck, who was a seven-time premiership-winning player for the Hawks.

Tuck lived with his parents during the last 18 months of his life and continually told them ‘he didn’t feel like himself’. 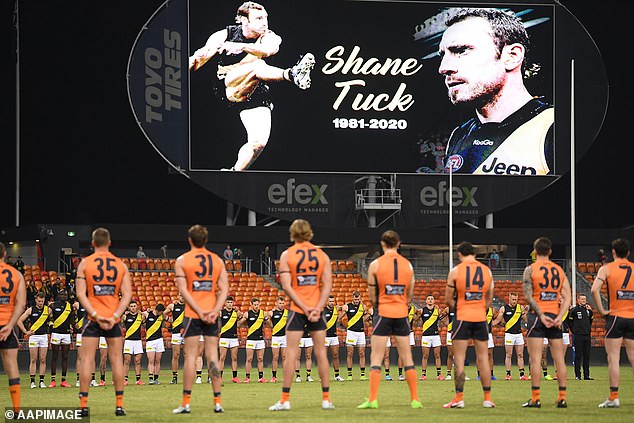 The Giants and the Tigers take a minutes silence in memory of Richmond’s Shane Tuck during the Round 8 AFL match between the GWS Giants and Richmond Tigers at Giants Stadium in Sydney, Friday, July 24, 2020

His mother Fay said Tuck was intelligent enough to know there was something wrong with his brain.

Fay read about Farmer’s diagnosis around the time Tuck died and thought that her son could have suffered from the same condition.

The family then decided to donate Tuck’s brain for research to get ‘answers’.

The degenerative brain disease has been known to affect boxers since the 1920s but has been found in other sports in recent years.

The first official case in another sport was an American NFL player in 2005. Other sports followed, including ice hockey, soccer and rugby union.

Researchers rely on the donation of dead athletes in their attempts to understand CTE.