After 10 years … a dilapidated golden chair, an unknown grave, and supporters in the dark 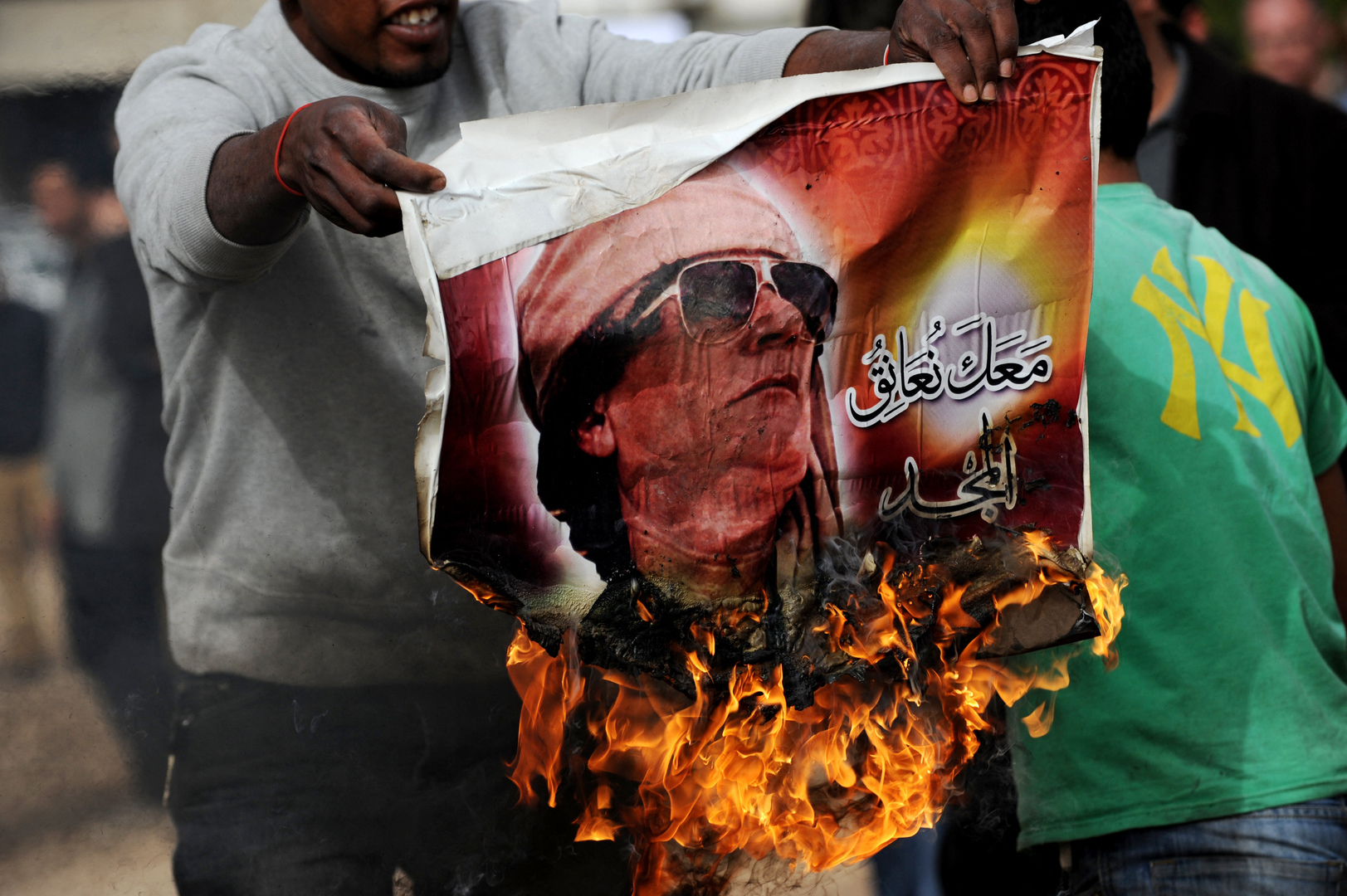 What happened in Libya in 2011 can be described as a “devastating earthquake” that not only led to the overthrow of the old Gaddafi regime, but also toppled the country’s balance and balance and plunged it into chaos.

Since the second half of February 2011, Libya went through a difficult labor, which turned into bloody acts of violence that spread rapidly, and the intensity of which was exacerbated by the intervention of NATO, and the regime’s mistakes in its handling of the crisis, which turned into a relentless war that ended with the fall of the regime after 7 months of fighting and devastating air strikes And the killing of Gaddafi and 3 of his sons.

The country was not satisfied with the change, and warlords and power centers began to compete for power in several rounds that ended up establishing two authorities, one in the West and the other in the East.

After Field Marshal Khalifa Haftar’s campaign against Tripoli ended in failure, activity returned to the political sphere, and the United Nations recently succeeded with great difficulty in electing a single interim executive authority for the country.

This came with an innovative plan that succeeded in overcoming the paralysis of the parliament, by establishing the Libyan Political Dialogue Forum, consisting of 75 members representing the various spectrums of Libyan society, which was entrusted with the task of electing the new executive authority.

The step has been successful so far, and it is a real breakthrough in the intractable Libyan crisis, but it will not be practically completed until after Parliament gives confidence to the new government that will take over the management of the country until the elections next December.

The formation of a single government in Libya is undoubtedly a great achievement, but the problem is that the step united the summit while al-Qaeda remained practically divided by the control of the General Command of the Army led by Haftar over the regions of the east and part of the south, and the mediation of the Tripoli forces over the regions of the west of Libya, while areas are still in Southern Libya is outside the influence of the two authorities, and is now in the grip of criminal gangs and forces from the Sudanese and Chadian opposition.

The second problem in the ongoing settlement process in Libya is that Gaddafi’s supporters are outside it until now, and most of them live in exile in neighboring countries, especially in Tunisia and Egypt, where their most important leaders reside.

It seems that until now the issue of reconciliation between the heads of the new authority in Libya and the political leaderships that speak on behalf of the former regime has not cleared up.

Also, parties in the existing authority in Tripoli still refuse any role for Field Marshal Khalifa Haftar in the independent Libya, which opens Yap to all possibilities.

What has been achieved in Libya through the Geneva Gate raises optimism about the possibility of reuniting the country, resolving intractable life problems, returning economic activities and restoring security, and achieving reconciliation, but all of this is not an easy matter, and it needs great efforts and a long time, especially since the armed militias in the West And east and south are still the same, have the power and influence that makes them a danger that can easily cut off what is reconnected.

So what is left of Gaddafi 10 years after the start of the great earthquake that destroyed the Libyan social fabric and drained the country’s wealth, and put it in a state close to paralysis?

In practice, there is nothing left of Gaddafi except supporters inside who go out in cover of darkness on national occasions, especially to celebrate the anniversary of the colonel’s arrival to power on the first of September, and large numbers live in exile without light at the end of the tunnel for their return and the return of normal life to the country.

Gaddafi was left with nothing but a worn out golden chair, a military hat and collectibles displayed in one of the exhibition halls in one of the Libyan cities, in addition to an unknown grave, in which he was buried to defame his supporters, and children distributed between exile and prisons.

Libya needs a lot of effort and time to recover and heal its deep wounds, and there is still a long way to go to achieve such a goal. Rather, the dangers are still looming, and it may return to the spiral of fighting and chaos if all the explosive fuses are not removed, the major issues are settled, and weapons are collected. The irregular formations are dissolved, and the law imposes its prestige, and the country has one specific authority, not the authorities, princes and powers that run the country from behind the scenes, and here lies the point of view.

Where Do I Put The Sofa? – The Key To Great Design Reviews