After flooring Tom Brady, Carolina Panthers’ Efe Obada is taking it one sack at a time 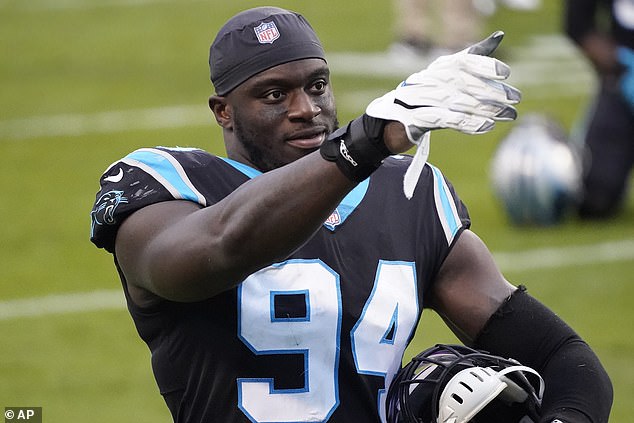 Efe Obada is in the form of his life, recording 3.5 sacks in his past four games.

First came Matt Ryan. Then Tom Brady. Next it was Matt Stafford, who he got to grips with twice with a little help from fellow Panthers D-lineman Brian Burns.

Obada only started playing football six years ago and after progressing through the NFL’s Player Pathway Programme is now ranked second on the team in sacks.

‘When I started playing football and someone would’ve said I’d sack Tom Brady, I wouldn’t believe them.

‘I’m really chuffed. And anyone who’s going to come after me from the Academy, I did it first, I sacked Tom Brady,’ he said.

The season has been a topsy-turvy one for Obada. After signing a one-year deal in January, he was surprisingly cut after making the Panthers’ 53-man roster only to be re-signed the following day.

‘It was an emotional rollercoaster but when it comes down to it, I have to focus on what I can control.

‘Initially when everything was going on, getting released, it did put a chip on my shoulder. But at the same time, I’ve just got to get my head down and control what I can control. I saw it as an opportunity to work on what I liked.’

After the win over Detroit, the Panthers are 4-7 and third in the NFC South.

‘I don’t feel the results match the amount of work that has been done behind the scenes. At the end of the day, it comes down to who plays best on Sunday – you’ve got to take your hat off to the guys who have won against us. I think we’re a great team. We’re still trying to figure out some things. We have some things we need to work on.

‘It’s no secret defence needs to figure out how to get off on third down. On the offensive side, I think they’re doing great. It’s still early days and we’re still trying to figure out how to play with each other. I don’t want to make any excuses, we’re all competitors, we all work hard. It is what it is – we have to play better and do better.’

As the Carolina Panthers travel to face the Minnesota Vikings on Sunday, a familiar face will be back at US Bank Stadium.

Teddy Bridgewater took the Vikings to within a 27-yard field goal of reaching the divisional round in the 2015 season.

But Blair Walsh missed the kick and then Bridgewater suffered an horrific knee injury at practice before the 2016 opener.

After spells with the Jets and Saints, the 28-year-old is the Panthers starter.

After sharing a locker room with Cam Newton for the first years of his career, how is Bridgewater as a team-mate?

‘It’s different because he is a leader. I think he leads by actions. He puts himself out there and he’s very relatable, very down to earth. He’s had some adversity in his early career, and he’s overcome that. What he does on game day and how he prepares, you want to rally around that. He’s a great quarterback, he’s smart, I like him, he’s a good guy,’ Obada said.

The Panthers will be playing without fans in Minnesota, but Obada is focused on the bigger picture.

‘Yeah it is different, especially at home when you have your fans and your supporters it’s a different atmosphere.

But before that comes Thanksgiving, which Obada will be spending with team-mate Marquis Haynes.

And after initially not knowing much about the festival, he has become a convert.

‘I celebrate it for the food. And some of the guys invited me over to their houses and it’s really nice to spend time with them and their families and see how they celebrate it. But for me it’s just a day I can eat a lot!’

Britain braced for T-Day: Boris will announce TODAY which Tiers country will be placed in until Xmas