After overcoming jungles and rivers, immigrants appreciate being transported “in a good way” from Texas to Washington DC 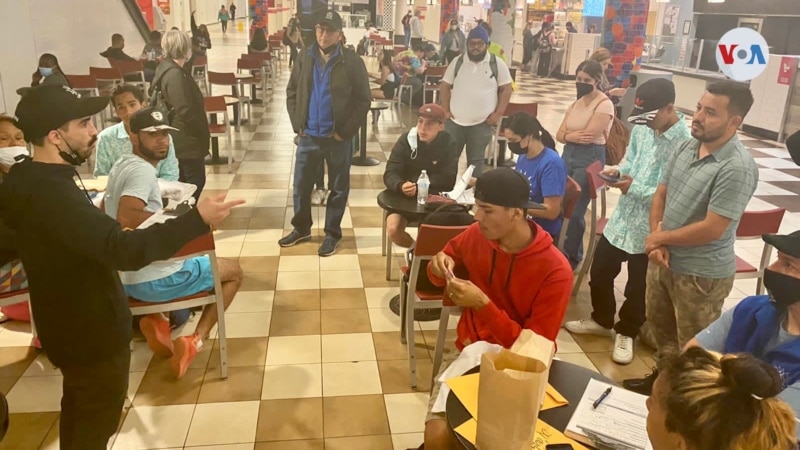 After four months of walking through nine countries, Karla, a young Venezuelan, managed to reach the United States, where she hoped to receive help from the authorities.

She is part of a group of Latinos who arrived in Washington DC on Saturday, on a bus from Texas, as part of the New Texas Governor’s Immigration Strategy, Greg Abbott. It was the fourth bus of this type to arrive in the heart of the country throughout the week.

The young woman remembers that, during her journey, the most difficult thing was to cross The Darien Gapforced passage of immigrants who pass from South America to Central America.

“In the course of coming here, we had to spend nine days in a jungle, which is the Darien jungle. It is in Colombia… Since we were illegal, we had to cross to get to Panama. In that jungle we don’t have food, water is only found in the rivers,” said this 20-year-old Venezuelan to the voice of america.

But, without a doubt, he says that the most traumatic It was seeing “dead children, dead pregnant women, already decomposed”, in addition to sleeping on the banks of the river in a tent or even having a threatened abortion, after the fatigue of so many days walking.

He also remembers how he had to cross the Rio Grande, between Mexico and the US: “At that time, it wasn’t swollen or anything, but the current of that river was too strong, that is, it drags you. We crossed with children; We came 26 times as Venezuelans, including children who were no older than eight years old. They were minor children, and until we crossed and from there we had to walk for a long time until we reached an avenue and everything from where the soldiers from here grabbed us, ”he recalls.

Karla pointed out that, during the trip from Texas to the US capital, the authorities put a bracelet on them to track them “so that every time the bus made a stop, that is, we didn’t miss any.”

Another of the travelers is John Carlos León, who left Caracas on January 17 and affirms that the Border Patrol, in Texas, helped them with the papers. After being in a shelter, he explains that they collaborated on a bus to get to the US capital, without any problem, with good treatment and the necessary food.

“The registration was done in the house [de acogida] where we arrived… On the bus we came with some friends, who were the drivers and some in charge of the group”, the young man told VOA.

For her part, Graciela Cárdenas -who traveled from Venezuela with her two children, two grandchildren and her daughter-in-law-, pointed out that they have been treated “in a good way” by the border police. Although she became separated from some of them when they came into contact with border authorities, she says she will be heading to New York, where she may be able to meet up with some of her family.

The Venezuelan also told the VOA who decided to take the bus because “it is closer to his final destination… If I had an option to wait for my son there, I would have taken the option… But if I didn’t take the bus, I would have stayed on the street.”

Abel Núñez, executive director of the Central American refugee center Carecen, in Washington DC, explained to VOA that people from Venezuela and Nicaragua were on the bus. Some will stay in the area with their families, but others have a desire to make it to New York.

For him, that in a bus with availability for 50 people, only 9 come, “speaks a lot about the fact that many immigrants are not taking the gift that the governor is giving them.”

Núñez stated that they must first review their legal matters to find out what status they qualify for, such as asylum, but their housing, employment and health needs will also be reviewed to “ensure their integration into the community.”

The spokesman for Carecen, in Washington DC, also stated that it will be verified where the migrants want to live and they will be given legal advice, after their arrival in the city on Saturday.

The group that arrived, he adds, was in good condition, despite the almost 40 hours of travel, and says that the concern of some of them is the loss of contact with part of the family. The trip ended around the Capitol, where they got off the bus and each went their own way.

Governor Greg Abbott this week began his promise to send undocumented immigrants seeking asylum to the nation’s capital as part of his plan to rejection of immigration policy of the administration of President Joe Biden. The governor said that he would send up to 900 buses to the same destination.

Abbott revoked on Friday cargo truck inspection order that obstructed the transit of commercial vehicles on the border between the United States and Mexico.

Ansu Fati: I am a Muslim and I hope for a kind response from Guinea-Bissau | Football

Ansu Fati: I am a Muslim and I hope for a kind response from Guinea-Bissau | Football