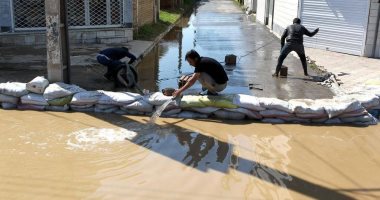 Thousands of people prepared for floods on the eastern coast of Australia, today, Sunday, with the closure of beaches and the authorities urged people to fortify their homes with sandbags, days after forest fires that threatened a World Heritage site in Australia

With 475 millimeters of rain falling during the past 24 hours, the Met Office issued a “bad weather warning” in the border area between New South Wales and Queensland, a densely populated area that includes Brisbane, the capital of Queensland state..

A week ago, the nearby Fraser Island was evacuated due to forest fires, dashing hopes that the rain would make the seasonal fires less dangerous than last year..

The authorities issued a flood warning about Fraser Island, the largest sandy island in the world, which included urging motorists to avoid roads where water has already risen..