Drivers were terrified when a wild bear started chasing their vehicles close to the spot where two villagers were killed the previous day.

Dramatic dashcam footage shows the car’s driver reversing away from the aggressive animal as it lumbers after them along a stretch of empty road cutting through a forest in India.

The vehicle continues to travel backwards as the bear makes several attempts to jump onto it.

Suddenly the beast gives up and turns its attention to an open-backed truck which overtakes the car on the left hand side.

The determined bear chases the truck along the road as it tries to haul itself onto that instead.

The terrifying saga is narrated by two of the occupants of the car as they watch it unfold while tailgating the truck. 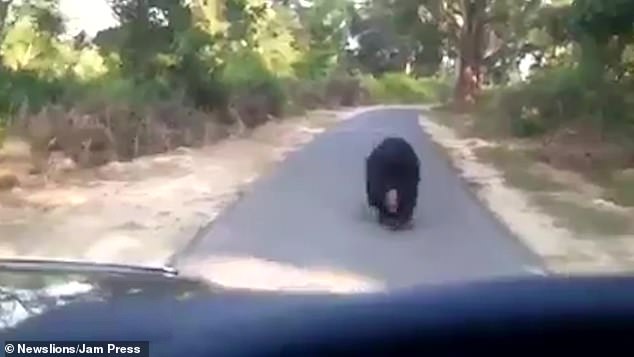 One of them shouts: ‘Oh gosh look, look it’s trying to climb into the truck. Look it’s now trying to hide under the wheel. The bear is so determined it won’t give up. The bear is so stubborn. Oh gosh it’s so dangerous. I can’t believe this is happening live right now.’

On a number of occasions, the bear looks as though it might just make a successful leap into the open-ended truck and reach the driver. 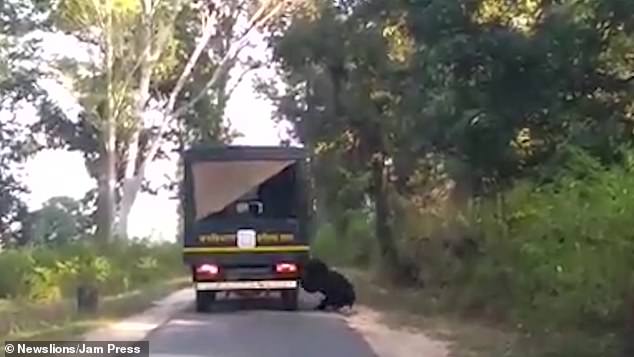 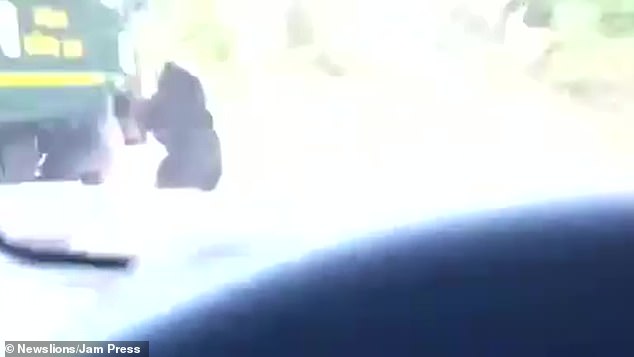 Determined: The bear is standing up on its hind legs as it attempts to leap inside the moving vehicle

At one point it clings onto the right hand side tyre for several seconds trying to hoist itself up.

But the bear is jolted off it by the truck and lands back on the tarmac before making several further attempts.

As the drama plays out in front of them, the two occupants steer their conversation onto another terrifying incident involving a bear just a day earlier. 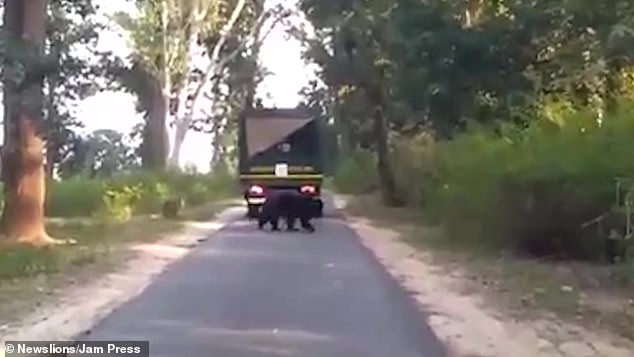 ‘There’s been a bear hanging around in the jungle for the last few days. In fact, only yesterday, two villagers were killed by a bear. They had been chopping wood from a dried up tree when they were attacked by a bear. They both died.

According to local reports the victims, 35-year-old Moharlal and Kamala Ram, 50, went to pick wood in the forest along the Ara-kakna road on Friday October 30.

They were returning home when a bear attacked Kamala Ram. Moharlal tried to save him  but was also attacked and tried to flee. But he fell into a pit and was mauled to death by the beast. 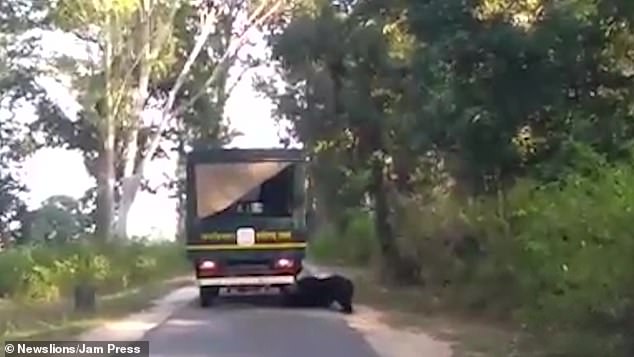 Moments later the clip shows the truck coming to a halt on the road and the bear appears to lose interest and walks away.

Despite the terrifying chase, no one was harmed.

The incident happened in broad daylight in the Ambikapur division in India on 1 November.

The area is home to sloth bears, a species native to the Indian subcontinent.

Experts say human and bear interactions are accidental and unusual, but the frequency is increasing due to encroachment of forest by humans.