Hegazy published a set of pictures of the Saudi Federation’s victory over its counterpart Al-Nasr 3-1, at the top of the fifth round of the Saudi League competition, “Prince Mohammed bin Salman Professional Cup League” in the current season 2021-2022, commenting on it in the union’s strength.

Egyptian defender Ahmed Hegazy expressed his great happiness with the precious victory of his team, Al-Ittihad, over its host, Al-Nasr, with a score of 3-1, which brought the two teams together, on Saturday evening, at the “Mrsoul Park” stadium, in the top of the fifth round of the Saudi League competition, “Prince Muhammad Cup League.” Bin Salman for professionals” for the current season 2021-2022. 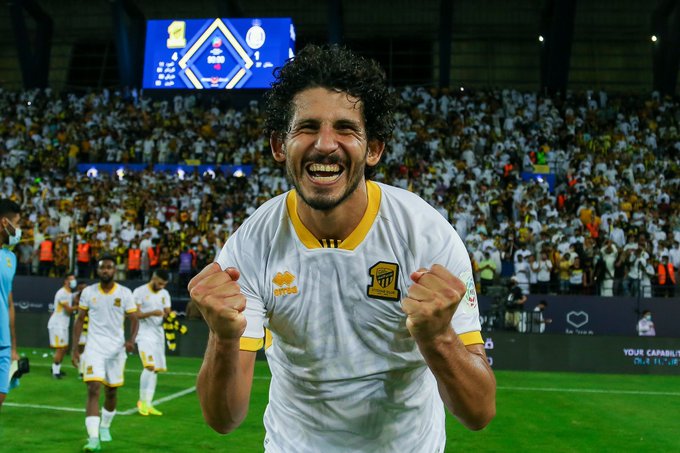 Hegazy spoke on the channel “SSC” Sports, after the end of the match, saying: “Praise be to the victory, 3 important points after beating a big team like Al-Nasr.“.

He added, “All members of the team played a strong offensive and defensive match, and we succeeded in studying the strengths of the Al-Nasr team, represented by the Moroccan offensive duo Abdel Razzaq Hamdallah and the Cameroonian Vincent Abu Bakr.”“.

Regarding Al-Ittihad’s goals in the current season, the Egyptian defender replied: “Winning victory is like getting 6 points, especially since Al-Nasr is one of the teams competing strongly for the Saudi League title, but it is still a long way to go.”“.

Abdul Rahman Al-Abboud opened the goals of Al-Ittihad in the 11th minute of the match, then Sultan Al-Ghannam equalized for Al-Nassr in the 38th minute, before the Al-Ittihad team scored two consecutive goals through Igor Coronado and Bruno Henrique in the 64th and 89th minutes of the match.

With this result, Al-Ittihad regains the top spot in the Saudi League standings, as the team has 12 points from 5 matches collected from 4 victories and one defeat..

Al-Nasr occupies the eighth place in the Saudi League standings, after its balance froze at only 6 points out of the total 4 confrontations it has played so far, where it achieved two victories and two defeats..