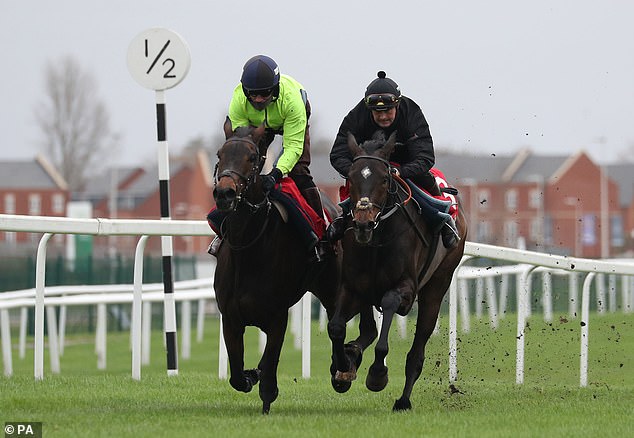 Aidan Coleman has picked up the ride on Champion Hurdle winner Epatante and will be on board the mare for her seasonal reappearance in the Fighting Fifth Hurdle at Newcastle at the end of the month.

The mount became available after the retirement of Barry Geraghty, the retained jockey of owner JP McManus, who partnered Epatante to her Champion Hurdle victory and success in last season’s Christmas Hurdle at Kempton.

But it was Coleman who rode the Nicky Henderson-trained horse when she made a winning seasonal debut last year at Newbury’s Ladbrokes Trophy Chase meeting.

Henderson said: ‘JP has a lot of horses and Aidan is going to be riding a few of them. There is no particular retained jockey in this country. Aidan won the Gerry Feilden on Epatante last year so he has ridden her before.’

No decision has been made as to who replaces Geraghty on Henderson’s dual Champion Hurdle winner Buveur D’Air. He is on the comeback trail after suffering a horrendous injury when a wood splinter became embedded in his hoof while running in last season’s Fighting Fifth Hurdle.

Henderson said: ‘I can’t tell you where he is going to run but he is doing a lot of work and is very well. His foot has grown over and he seems in tremendous form. It was an horrific injury and it has taken a lot of work to get him back. It is a dream really.

‘Hopefully he and Epatante will meet in the Champion Hurdle in March.’

Epatante was among a group of horses to work at Newbury yesterday ahead of next week’s Ladbrokes Trophy meeting. They included Emma Lavelle’s Paisley Park, who Coleman will partner in the Long Distance Hurdle at the course a week on Friday, 24 hours before teaming up with Epatante at Newcastle.

Paisley Park won the race last year but will be racing for the first time since failing to retain his Stayers’ Hurdle crown and being found to have an irregular heartbeat at Cheltenham in March.

A positive Lavelle said: ‘All this season he has been sparky and seems much more up for it.’