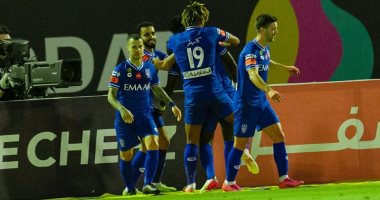 Today, Monday, the matches of the sixteenth round of the 2021 AFC Champions League will return, and the opening match for the final price will be between Al Hilal of Saudi Arabia and Al Estiqlal of Iran..

Al-Hilal Saudi Arabia qualified for the first group as runner-up behind the Uzbek Ajmak, who excelled in direct confrontations, after collecting 10 points each, while the Iranian Esteghlal Club qualified for the third group as the leader after obtaining 11 points..

The Saudi Hilal will be on a date with a strong and difficult confrontation against its counterpart against Iran’s Esteghlal Tehran, at seven in the evening, Monday, at Zabeel Stadium in Dubai in the round of 16 of the Asian Champions League.

Al Hilal seeks to regain the title that has not been crowned since 2019, and to return to participate in the Club World Cup in its next edition.

And it was confirmed that Salman Al-Faraj, the Saudi midfielder, Al-Hilal, and the leader of the leader, was ready to play the Iran-Istiqlal match, in the first leg of the AFC Champions League final..

Salman Al-Faraj missed Al-Hilal training in the past two days; Because he was ill, he was prevented from participating in the Blue Team training, according to the club’s official account on Twitter“.

Salman Al-Faraj returned to Al-Hilal training yesterday, and participated normally, which confirms his readiness to play in the next Esteghlal match in Tehran.

While Al Hilal lacks in the Esteghlal Tehran match the services of the injured midfielder Abdullah Atif, in addition to the other midfielder, Muhammad Kanoo, due to the suspension..

Al Hilal traveled on a private plane to Dubai to face Istiklal Tehran in the first leg of the AFC Champions League final, after Al Hilal players took a last training session, yesterday, Sunday, before the important match at Zabeel Stadium in Al Wasl Club in the UAE..

Esteghlal Tehran is considered the second most Iranian team that Al Hilal has faced in history, as it played 10 Asian matches against it. The first won 5 times, compared to 3 victories for the leader and two draws..

And to calculate the quarter-finals of the 1999 edition of the AFC Champions League with its old system, Esteghlal Tehran won 2-1 against Al Hilal, who returned to win the Champions League in 2003 with a 3-2 score..

The leader has a distinguished record, in his confrontations with Iranian teams in the Asian championships in general, where he met them in 39 matches, winning 17 of them, compared to 13 defeats and a draw 9 times..