Al-Ittihad tied with Al-Taawon and maintained the top spot in the Saudi League, with the participation of Hegazy.. Video 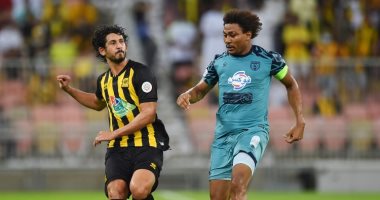 The Professional Federation, in its ranks, the Egyptian defender Ahmed Hegazy, drew 1-1 with its guest Al-Taawon team, in the exciting match that brought the two teams together, on Friday evening, at the King Abdullah Sports City stadium, in the sixth round of the Mohammed bin Salman Professional Cup League. Saudi League”.

Ahmed Hegazy participated in the entire match with Al-Ittihad, appeared at a good level, and contributed to the scoring of a second goal for his team before it was canceled from the video technology “VAR”, due to the presence of infiltration.

Ittihad Jeddah ended the first half of the match with a goal scored by Brazilian striker Romarinho in the 27th minute through a penalty kick.

In the second half, Al-Taawoun managed to score the equalizer in the 74th minute, from a strong header that Al-Ameed goalkeeper Grouhy failed to lead.

Ahmed Hegazy almost scored the winning goal for his team in the 84th minute, had it not been for the ingenuity of Cassio, Al-Taawoun goalkeeper, who blocked the header of the Egyptian defender.

Al-Ittihad maintained the top spot in the Saudi league standings with 13 points, one point ahead of Al-Hilal, the runner-up with 11 points, after its positive draw yesterday, Thursday, against Al-Shabab, 2-2, while Al-Taawoun is bottom with 3 points.

The matches of the sixth round of the Saudi League will conclude tomorrow, Saturday, with Al-Fateh and Al-Hazm matches, and Al-Raed will host Al-Faisaly.