Alexander Wang is accused of sexual assault by several ‘victims’


Alexander Wang is facing allegations of sexual misconduct after several unnamed models and accusers spoke out against the fashion designer on social media.

Wang, who became known for his star-studded parties following the launch of his fashion label in 2005, declined to comment on the accusations on Tuesday, WWD reported.

It comes as the 37-year-old New York City designer was accused of being a ‘sexual predator’ by multiple anonymous accusers, many of whom claimed Wang had drugged and sexually assaulted them at parties in recent years.

Alexander Wang, who rose to fame in the mid 2000s following the launch of his fashion label, has been accused of sexual misconduct by multiple individuals. He is pictured above with Naomi Campbell and Janet Jackson in January 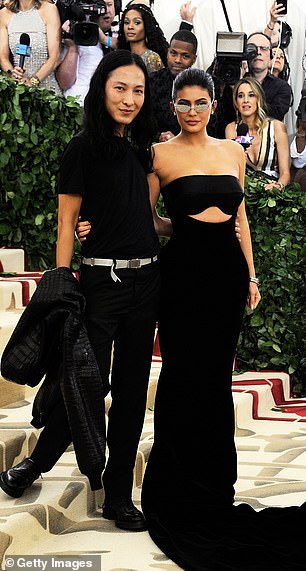 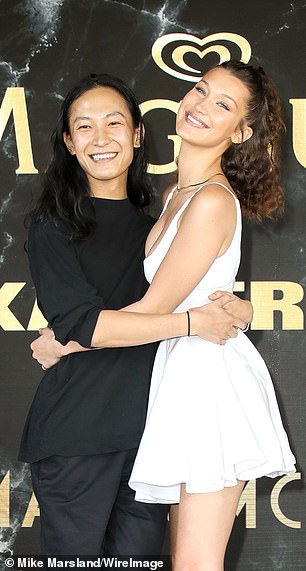 Wang, 37, declined to comment on the allegations on Tuesday. The NYC fashion designer is known for his hard partying lifestyle and for hosting star-studded events. 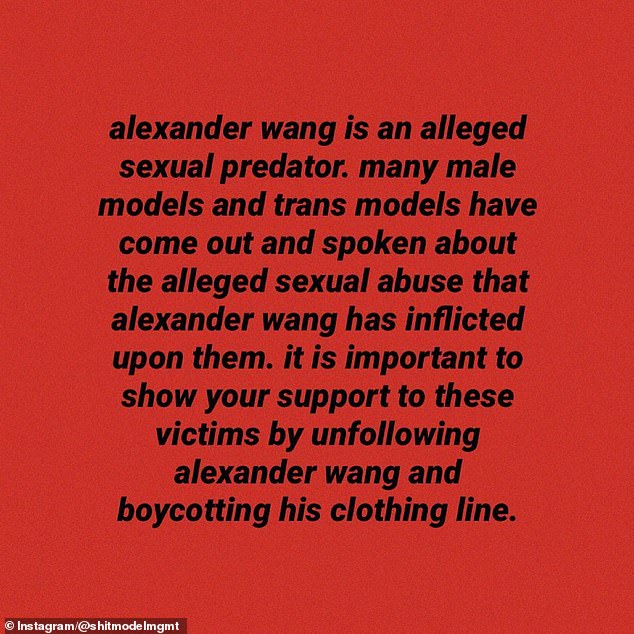 The stories went viral on Monday when they were shared by industry watchdog, Sh* Model Management in an Instagram post, along with a call to action.

‘It is important to show your support to these victims by unfollowing Alexander Wang and boycotting his clothing line.’

Included in the post was a clip by model Owen Mooney, who had earlier uploaded a TikTok video claiming he had been ‘touched up’ by a ‘really famous’ fashion designer in 2017.

Although Mooney did not initially name his alleged abuser, he later uploaded a follow-up video following speculation from viewers and confirmed it was Wang.

Mooney alleged he had been at a crowded club in New York City where he and a few friends had gone to watch rapper Cupcake perform. 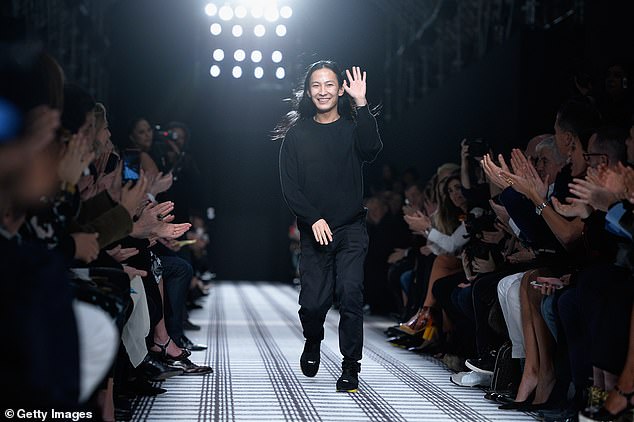 Wang, who launched his fashion label in 2005, formerly served as the creative director of Balenciaga 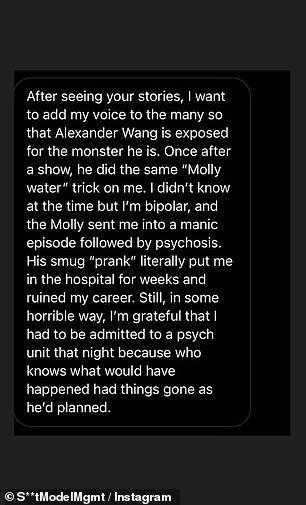 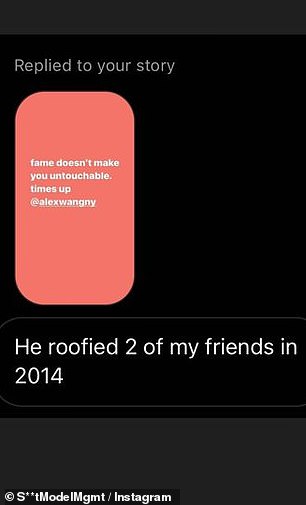 One alleged victim also claimed Wang had done the same ‘Molly water trick on me’, while another accused him of drugging two friends in 2014. 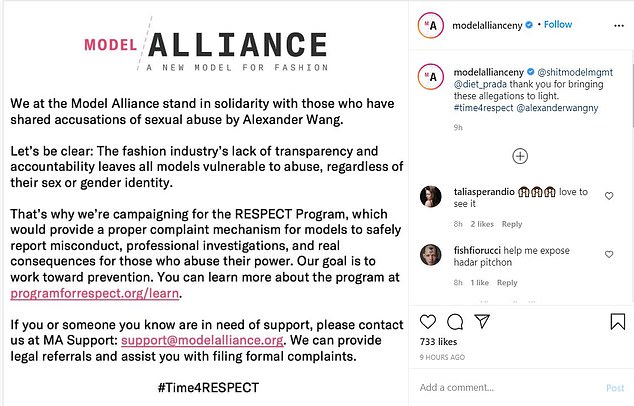 ‘I was by myself at one point and this guy next to me obviously took at advantage of the fact that no one could f**king move,’ Mooney says in the video.

‘And he just started touching me up. Like, fully up my leg, in my crotch. It made me freeze completely me because I was in so much shock.

‘And then I look to my left to see who it was and it was a really famous fashion designer and I just couldn’t believe that he was doing that to me,’ Mooney added.

The model went on to describe the incident as ‘really f**ked up’, saying he then had to ‘slowly move away’ from the designer.

Mooney’s account was one of at least seven included in the post on Monday, the majority of which were shared through screenshots of allegations sent in by anonymous users. 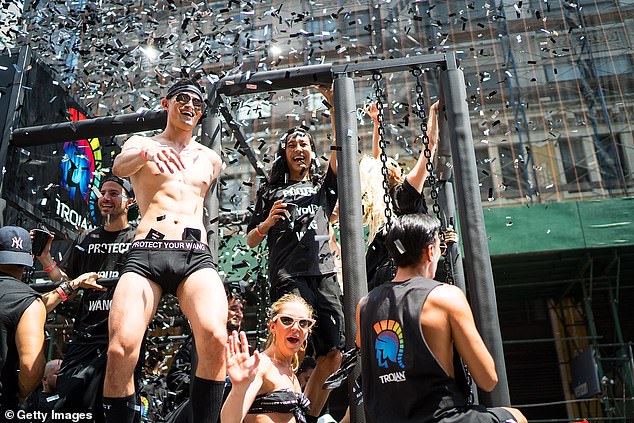 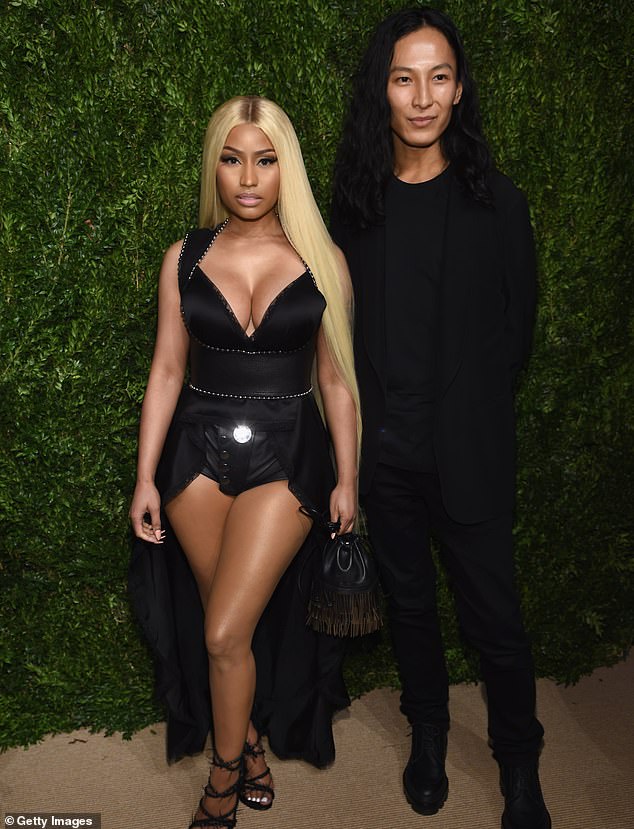 One accuser claimed their friend, who is a trans man, had been riding in a limo with Wang after a party ‘a while ago’ when the designer offered him water and made sure he drank it all.

‘A few moments after, they noticed they were rolling and had been giving molly water,’ the anonymous person claimed.

‘This was a regular occurrence because a year after being told this story, I also heard other people confirm that they also got drugged on the way to any after party.’

Another alleged victim also claimed Wang had done the same ‘Molly water trick on me’, while another accused him of drugging two friends in 2014.

‘We at Model Alliance stand in solidarity with those who have shared accusations of sexual abuse by Alexander Wang,’ it said in an Instagram post.

‘Lets be clear: The fashion industry’s lack of transparency and accountability leaves all models vulnerable to abuse, regardless of their sex or gender identity.’

Wang and his reps did not respond to DailyMail.com’s repeated requests for comment.