Alien-like sea creatures are washing up on Australian beaches in Sydney, Northern Beaches

Hundreds of spectacular alien-looking sea creatures are washing up on Australian shores along the east coast.

Marine biology student and photographer Lawrence Scheele has been tracking the Blue Dragons, known officially as Blue glaucus, which are normally found floating in remote ocean waters, as they are pushed down along the coast by north-easterly winds.

Mr Scheele has followed the ‘Blue Fleet’ from his North Queensland base earlier in the summer to their arrival on Sydney’s Northern Beaches in February.

The more familiar Bluebottle is from the same family, but Blue Dragons can pack a far more painful sting if touched. 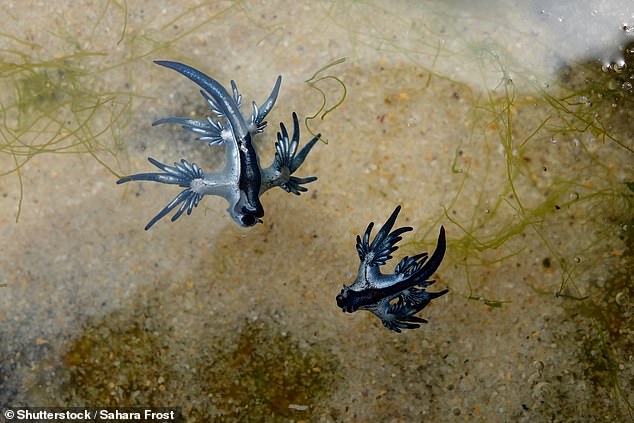 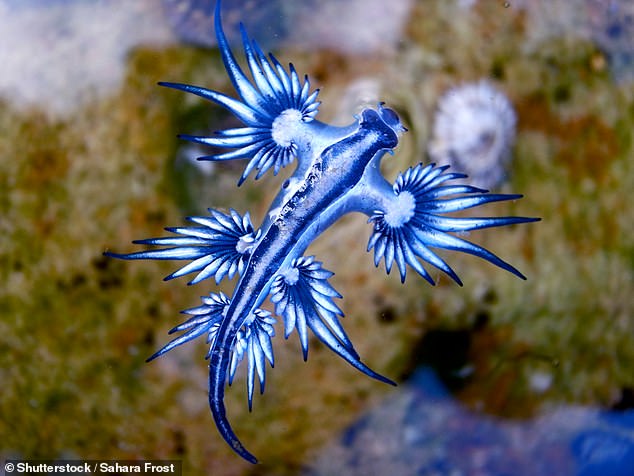 The spectacular animals are a type of nudibranch and float on the surface of the ocean, pushed about by currents and winds

‘Had an unsuspecting visit by hundreds of these beautiful creatures known as Glaucus marginatus, not to be confused with their cousin Glaucus atlanticus. During summer strong winds wash these 1cm nudibranches onto shore,’ Mr Scheele wrote to Instagram.

Both species mentioned by Mr Scheele are Blue Dragons and look remarkably similar, but Glaucus Marginatus are smaller, growing to about 1.3cm, while the other reaches to 3cm.

The creatures belong to an order of animals known as nudibranches – a group of about 3,000 species of vibrantly coloured mollusks which do not have shells.

They feed on other small ocean invertebrates and known to have no problem munching on other members of the Blue Fleet. 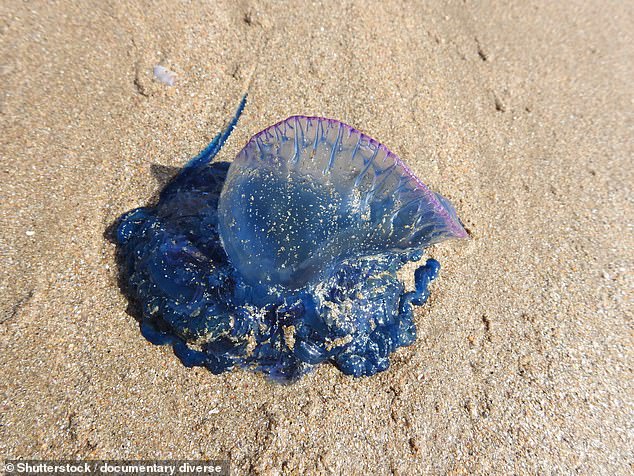 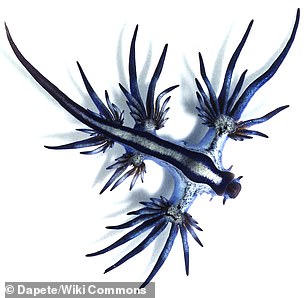 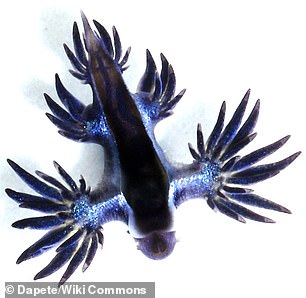 Blue Dragons float upside-down on the surface of the ocean with their bright blue undersides thought to provide camouflage by blending into the blue ocean.

Their topsides are silver which when viewed from underneath the waves, also blendsinto the silvery light refracted on the water’s surface.

They swallow a small air bubble which allows them to float on the surface of the water but which also leaved them at the mercy of winds – with mass strandings happening every few years.

They have six appendages which branch out into what is known as cerata – which perform two functions – gas exchange, the equivalent of gills, and defence.

The creatures are venemous, producing cells called nematocysts which fire off when touched and deliver a sting to other organisms. 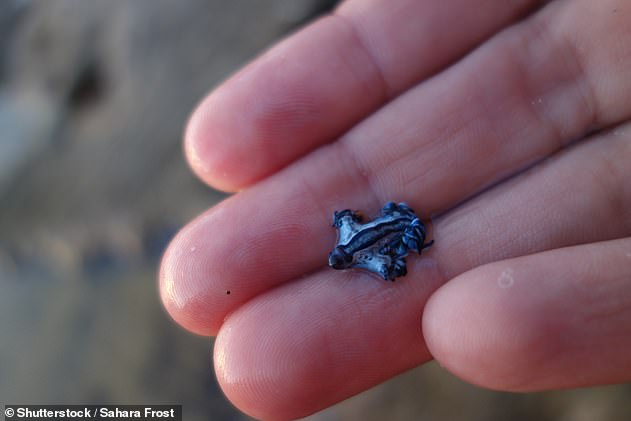 Glaucus marginatus (pictured) is the smaller of the two reaching just 1.3cm in length 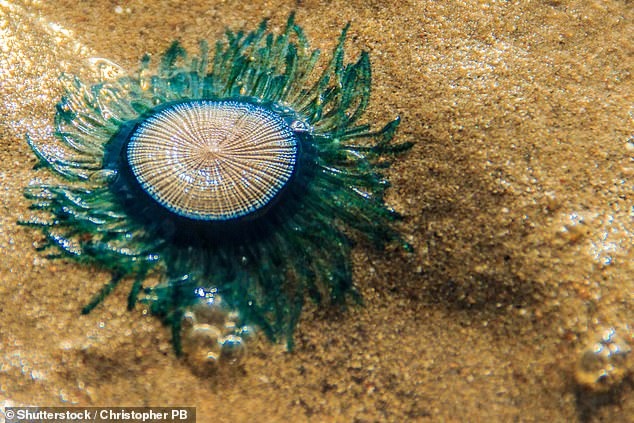 Humans handling Blue Dragons can receive an extremely painful sting similar to that of the Bluebottle, also called the Portugese Man-of-War, and can actually ingest, store and re-use the stinging cells from these organisms.

Other members of the Blue Fleet include the also rarely seen Blue Button – which is actually a collection of individual creatures called polyps attached to a keratin disc.

The Violet Snail and the Vellala, or Purple Sail, are also members of the group which breezed into the Northern Beaches near Long Reef this week.

Researchers have noticed a rise in numbers of Blue Dragons in recent years with some suggesting warming seas could be the reason.

Others have noted the creatures seem to wash ashore a few days after a full moon, which may affect tides and currents.

WHAT IS A BLUE DRAGON?

Also known as the blue dragon, sea swallow or blue angel, the blue glaucus is a species of brightly colored sea slug (nudibranch), and can be found throughout the Atlantic, Pacific and Indian Oceans in temperate and tropical waters.

Like most nudibranchs, this species incorporates toxic chemicals or stinging cells from its prey into its own skin.

This ability provides the blue glaucus with a defense mechanism against predation.