By Jackson Barron and Alana Mazzoni For Daily Mail Australia

Strict coronavirus rules have been eased in Victoria after a golden run of ten days without any local COVID-19 infections or deaths.

The sweeping changes were announced by Premier Daniel Andrews on Sunday, with another batch of restrictions due to be lifted in two weeks on November 22.

From 11.59pm on Sunday, libraries, galleries, cinemas, gyms and museums will be allowed to open for Victorians with 20 people per venue.

The limit will increase to 100 people from November 22.

Punters are now able to get back on gaming machines, with ten patrons per venue, while casinos are permitted to hold 10 people per room. 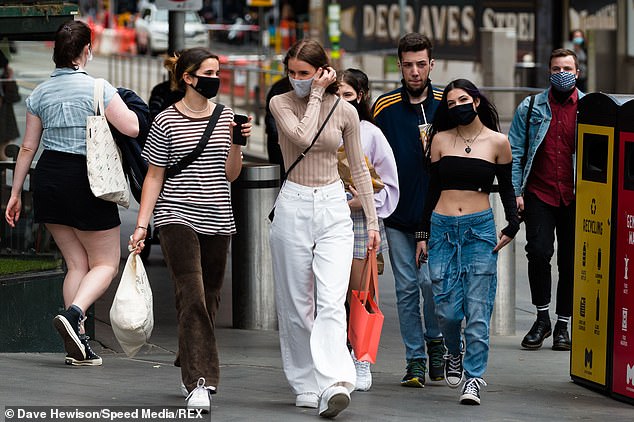 Strict coronavirus rules have been eased in Victoria after a golden run of ten days without any local COVID-19 infections or deaths. Pictured: women wearing face masks walk in Melbourne CBD

Also from November 22, Victorians will be allowed ten people round to their house, regardless of their household bubble.

All hospitality venues including bars, pubs, restaurants and cafes will be allowed 100 customers indoors and 200 outside.

Cinemas and galleries will also be allowed 100 patrons, while wedding limits will shoot up to 100 people.

At gyms, 100 people will be allowed in two weeks with maximum groups of ten – signalling the start of group exercise classes.

Community spaces including libraries or RSLs and neighbourhood houses can have up to 20 indoors, with groups of up to ten. 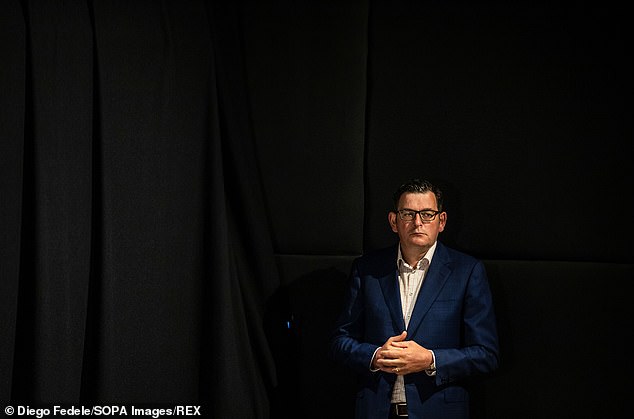 Travel: The ‘Ring of Steel’ will be dropped from Melbourne, allowing full regional travel

End of the 25km rule that kept people close to their homes, with hotels now also allowed to open up

Socialising: Households can still only have two visitors at a time, but they can be from two different households and can bring their children

Sports: Gyms and indoor facilities can open with up to 20 people inside, and only ten people in each area

Indoor sport can start again for 18 and unders

Ceremonies: 20 people will be allowed inside for religious ceremonies, with 50 permitted outside – with the same applying to funerals, but not to weddings

Entertainment: Community spaces such as libraries, RSLs and play centres as well as cinemas, galleries, museums and theatres can have up to 20 indoors, with groups of up to ten

Aged care: Visits are also allowed once per day and for up to two hours, with the time limit for partners to visit maternity wards also scrapped

Socialising: Victorians will be allowed ten people round to their house, regardless of their household bubble

Hospitality: All hospitality venues including bars, pubs, restaurants and cafes will be allowed 100 customers indoors and 200 outside

Entertainment: Cinemas, theatres and galleries will also be allowed 100 patrons

Beauty lovers will be allowed to take off their masks in salons, meaning the resumption of facial appointments

Casino caps will also be raised to 100 people

Sports: At gyms, 100 people will now be allowed with maximum groups of ten – signalling the start of group exercise classes

Ceremonies: Wedding limits will shoot up to 100 people, as well as for funerals and other religious ceremonies

‘It can’t be done open slather because whilst these numbers are good what we have all built together is fragile. Precious and fragile. It has to be safeguarded,’ Mr Andrews told a press conference on Sunday morning.

The major announcement comes as Victorians prepare to enjoy the first major easing of restrictions at midnight on Sunday, including finally going to the gym and travelling to regional areas.

The travel restriction between Melbourne and regional Victoria has been lifted and the 25km radius has been scrapped.

Gym and fitness facilities will reopen with a cap of 20 people while restaurants, hotels and cafes will be allowed to seat more patrons.

The outdoor cap will be raised to 70 while the indoor dining limit will be lifted from ten to 40 people.

Funerals will now be able to cater to 20 mourners indoors and 50 mourners outdoors.

Mr Andrews was particularly concerned about people obeying the rules regarding gatherings in homes after they were linked to previous outbreaks of COVID-19.

‘It’s really important that people stick within these rules. The data is very clear on this: so many of our recent outbreaks were connected to home visits,’ he said in a statement.

‘Home is where we relax, where we feel comfortable, which is precisely why it is so dangerous.’

The Netherlands suspends the use of the “AstraZeneca” vaccine against Corona