All you need to know about Romanesco cauliflower

Fall has arrived, and all manner of exciting fruits and vegetables are invading the produce section. But one piece of produce steals the show every single fall without ever breaking a sweat: Romanesco – the most beautiful vegetable in the world.

Even if the name Romanesco doesn’t ring any bells for you, you’ve likely noticed the striking vegetable before. It’s pretty hard to miss, actually. That’s because Romanesco looks like broccoli and cauliflower’s fluorescent green cousin that flies in from outer space to visit for a few weeks each year. This space broccoli is known as as broccolo romanesco, Romanesque cauliflower, or Roman cauliflower.

Like its more well-known relative, broccoli, what we call Romanesco is actually the edible flowering head of the larger plant itself. The edible head of cauliflower, on the other hand, is not the plant’s flower. But unlike both of its close relatives, or nearly anything else that humans ingest, Romanesco’s flowering head grows in a naturally occurring fractal.

For those of you who slept through that week of math class, fractals are geometric figures or curves that repeat themselves at progressively smaller and smaller scale, even as each piece maintains the same form as the whole. If you can’t quite wrap your rusty mind around that high school concept, just take a peek at the twisty, spiny protrusions of a Romanesco, which spin off into logarithmic Fibonacci spirals. 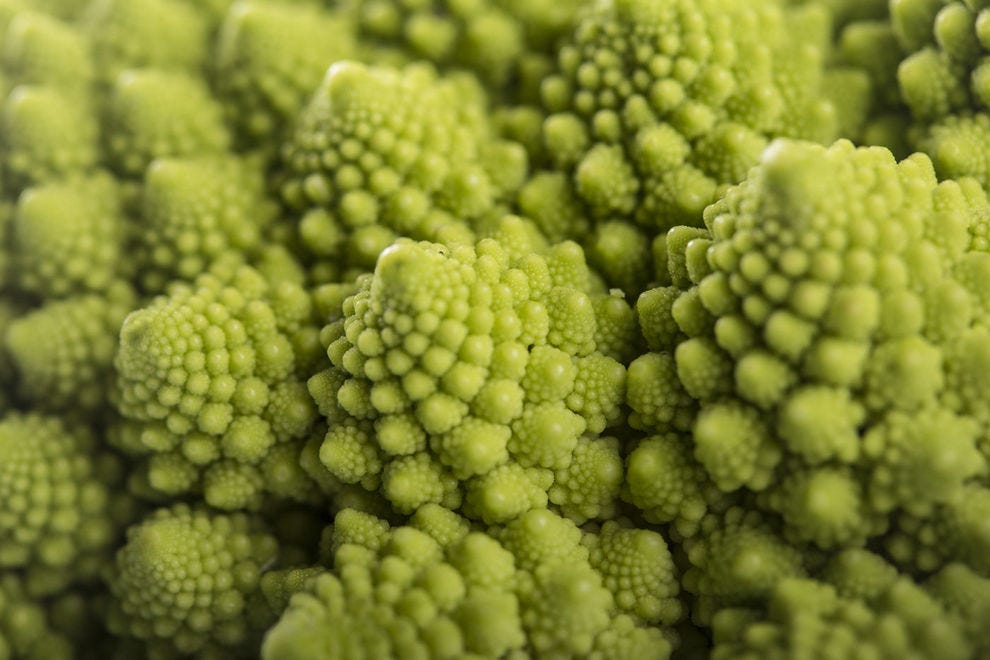 Like so many other great beauties, Romanesco’s season in the sun is quite brief. Because it’s grown in a few key parts of the world – namely Italy and part of the eastern United States – a select, lucky few are treated to multiple Romanesco seasons.

If you ever see these chartreuse stunners at a grocery store or farmers market, grab yourself a head. You’re not likely to get a second chance at them, even just a few days later. For most of us, a brief window in late summer or a second harvest in early winter are our only shot at enjoying this exotic vegetable.

And speaking of enjoyment, you might be wondering what it tastes like. Romanesco is described as possessing a somewhat earthy taste that meshes elegantly with other flavors like garlic, white wine and even chili peppers. Like broccoli, Romanesco can be eaten raw, but also holds up well under various cooking methods like stir frying or roasting in an oven. As the florets heat up, they can become surprisingly sweet, making Romanesco a perfect addition to curries and other spicy dishes.

Romanesco is a part of the Brassica family, and like its fellow members cabbage and kale, the vegetable is loaded with vitamins C and K. It’s also rich in fiber, protective carotenoids and a set of phytochemicals that may protect our bodies against molecular degeneration.

The iron and folate in Romanesco are known to boost red blood cell production, and even aid in reproductive health. And one more thing for non-tasters to take note of: consuming Romanesco may actually stave off a loss of taste sensation as we age.

In @StarWars #TheForceAwakens, the lead character snacks on what includes Romanescu Broccoli, nature’s only fractal food.

Finally, a bit of Romanesco pop culture for you: Despite its 16th-century Italian origins, Romanesco popped up “a long time ago in a galaxy far, far away” in “Star Wars: The Force Awakens.” Both Rey and famed astrophysicist Neil deGrasse Tyson appear to be fans of the unusual-looking vegetable. Hey, they’ve got good taste.