Allegri: It didn’t go well in Calcio and we need to feel responsible 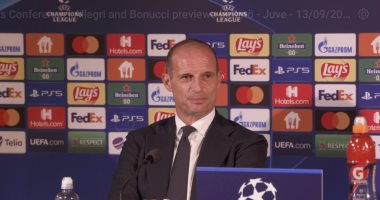 Massimo Allegri, coach of Juventus, expressed his dissatisfaction with the level presented by the players during the current season under his leadership, stressing that the current situation cannot be compared to the situation in 2015.

Juventus is a heavy guest against its Swedish counterpart Malmo at nine in the evening, Tuesday, at the “Malmö Stadion”, in the framework of the matches of the first round of Group H of the European Champions League..

Allegri said: “The current situation cannot be compared to the last time we played here (2014-2015), we have to win to lay the right foundations and to be able to face the group in the best possible way.”

He added: “You cannot predict what will happen in football, we must try to achieve the right things, at this moment in Calcio things did not go well, although the team is performing well, but we have to focus on tomorrow’s meeting with the champions.”

And he continued: “It will be important to play a technical match tomorrow and not allow them a lot of set pieces, because they are a very physical team, you have to face the matches calmly and know what needs to be improved regardless of the results. .

And he added: “Chesney is a high-ranking goalkeeper and will participate tomorrow, while Chiesa was not in a good condition so we preferred not to risk him, and Bernardeschi suffered a blow on Saturday evening, nothing serious but we also do not want to risk it.”

We are all responsible, and at this moment we need a greater sense of responsibility, we have to improve in many things, even in managing the moments of the match and also focusing on the small details that make the difference.“.

Allegri concluded: “Juventus must set itself the goal of always reaching at least the quarter-finals of the Champions League, we always have the desire to win.”