Almost 90 per cent of Covid-19 patients don’t have any of the three main symptoms of the disease on the day they are tested, scientists have revealed.

Researchers analysed data from 36,000 volunteers who were swabbed for the virus between the end of April, a month after lockdown began, and end of June.

But just 16 of 115 people who tested positive for Covid-19 had a fever, cough or had lost their taste or smell — the only symptoms listed by the NHS — on the day their sample was taken.

When fatigue and shortness of breath were added to the ‘core’ symptoms list, just 23 per cent had the warning signs.

Although 158 people in the survey were suffering from at least one of the three tell-tale symptoms when they were tested, only 10 per cent of those had the virus. This adds to evidence that thousands of people suffering from coronavirus-like symptoms will need to be tested this winter because it is the only way to find out if they have the disease.

The University College London study suggests at least 70 per cent of Covid-19 cases in the UK may be asymptomatic. But others say the actual number is much lower as false-positives in tests could lead to someone wrongly being diagnosed with the virus.

This means the Government’s beleaguered testing regime — where people are only tested if they have symptoms of the virus — may be missing thousands of ‘silent’ transmissions and infections spreading across the country.

Experts have suggested all university students should be swabbed before they head home to enjoy the Christmas break, on the back of the research. 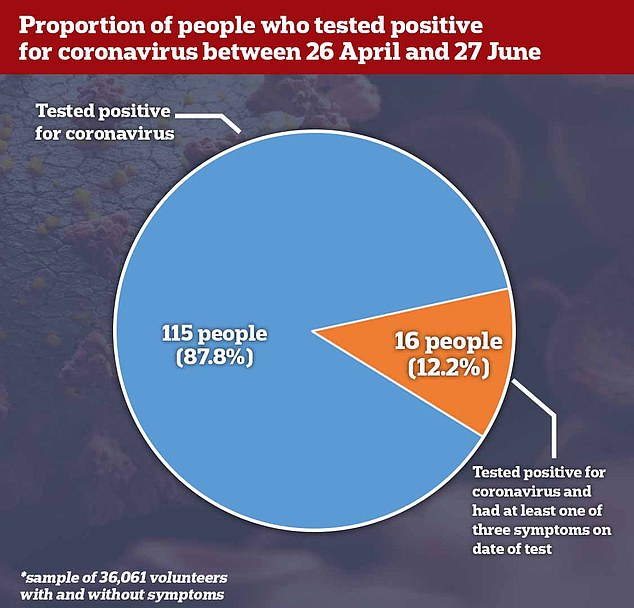 Covid-19 carriers with no symptoms may be ‘just as likely to transmit the virus’, scientists reveal

Covid-19 carriers with no symptoms are just as likely to transmit coronavirus as those who feel ill, according to scientists.

Two studies published in September gave further clues about the role played by ‘silent’ spreaders – who make up around half of those infected.

One study of South Korean Covid-19 cases revealed asymptomatic patients had the same viral load as those with signs of the disease, such a fever, a new and persistent cough or a new loss or change of taste or smell.

Viral load is a measure of how many viral particles someone has circulating in their body and how likely they are to transmit the virus to others by coughing or talking, for example.

It has previously been speculated that those who do not have tell-tale symptoms are infected with a smaller amount of the virus and, therefore, are less likely to spread it.

But some studies say asymptomatic spread accounts for the majority of transmission of the disease, given that people do not self-isolate if they are unaware they have the virus.

The task of uncovering the number of asymptomatic cases is difficult because it relies on screening people at random, which can produce mixed results.

Swiss researchers who analysed 79 studies and estimated that only one in five Covid-19 carriers show no signs of illness at all — far fewer than previously predicted.

It also found asymptomatic people were less likely to pass the virus on to friends and family.

The experts say their study — published in the journal Clinical Epidemiology today — highlights the need to roll-out testing more widely to ‘crack-down’ on infections.

Professor Irene Peterson, an epidemiologist at University College London who led the study, said their results reveal that ‘in the case of university halls, it may be particularly relevant to test all students before they go home for Christmas’.

She added: ‘The fact that so many people who tested positive were asymptomatic on the day of a positive test result calls for a change to future testing strategies.

‘Future testing programmes should involve frequent testing of a wider group of individuals, not just symptomatic cases, especially in high-risk settings or places where many people work or live close together such as meat factories or university halls.

Their study was based on data from the Coronavirus Infection Survey carried out by the Office for National Statistics (ONS) in England, Wales and Northern Ireland.

This randomly tests tens of thousands of people living in the UK to track the whereabouts of the virus.

Academic opinion is divided on whether asymptomatic cases are as likely to spread the virus as those with symptoms.

Experts say that as those without symptoms are not coughing, it is conceivable that the spread of the virus — which spreads through respiratory droplets — could be reduced.

But a study in South Korea published last month claimed asymptomatic cases had the same amount of the virus as those with symptoms — and therefore posed an ‘equal’ risk of spreading the virus.

Professor Tim Spector, the lead investigator of the Covid Symptom Study app which was the driving force behind adding loss of taste and smell to the list of Covid-19 symptoms, poured cold water on the findings.

The King’s College London epidemiologist told MailOnline the ONS data had ‘overestimated’ the number of positive cases without symptoms.

‘The problem with the ONS data was that the full range of symptoms were not collected systematically and were only collected on the day of sampling,’ he said.

‘We know that children and adults often don’t display the classic three symptoms.

‘Our own data of around 400 adult twins tested with antibodies and who logged symptoms daily via the app found that only 19 percent of people were asymptomatic. This underlines the importance of collecting the full range of symptoms.’

Swiss researchers found that a majority of people infected by the virus show symptoms, after they analysed 79 studies and estimated only one in five Covid-19 carriers show no signs of illness.

They said out of the 6,000 people included in their work – published in PLoS Medicine, as many as 4,800 developed symptoms of the disease at some point during their infection.

Dr Simon Clarke, associate professor of cellular microbiology at the University of Reading who was not involved with the research, said although 80 per cent had symptoms at some point, they are still likely to be pre-symptomatic.

He said: ‘It remains the case that on any given day, the majority of people with the virus will not be displaying any symptoms and these findings should not in any way detract from current infection control advice.’

Previous studies have suggested almost half of all coronavirus infections are asymptomatic.

When scientists tested all 3,200 people in the Italian town of Vo, 50 miles from Venice, during a major Covid-19 outbreak in March they found 42.5 per cent of all infections were asymptomatic.

Co-lead researcher Professor Andrea Crisanti, from the University of Padua, said the study revealed that testing all citizens provides a way to ‘manage the spread of disease and prevent outbreaks getting out of hand’.

And a separate study in Iceland revealed that 43 out of 100 people who tested positive on the island were asymptomatic.

Published in the New England Journal of Medicine, the scientists randomly tested 2,283 people living in the country to get their results. 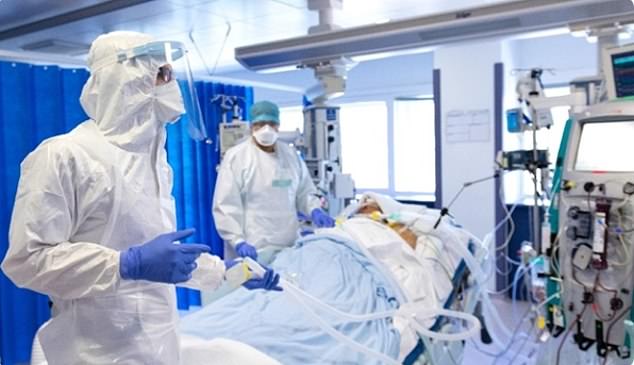 The UK Government has been repeatedly criticised for its ‘world-leading’ testing regime which has seen those with symptoms told to travel hundreds of miles to get a test, and a lack of swabs in coronavirus hotspots in the country.

This morning it was warned NHS laboratories could run out of crucial materials for Covid-19 tests within days after a supply chain failure at Swiss supplier Roche.

The company said it had experienced a ‘very significant drop’ in its processing capacity due to a problem at its distribution centre in Newhaven, Sussex, the only on in the UK.

The Government completed 273,000 coronavirus tests yesterday, as it aims to get to a target of 500,000 before the end of the month. But ministers are still light-years away from the ‘Operation Moonshot’ 10million tests target.

The IRS to enforce stricter rules for crypto exchanges

Meghan and Harry's daughter Lilibet remains to be lacking from the Royal line of succession SEVEN...