It is the telling statistic that demonstrates the longevity and success of Wales captain Alun Wyn Jones.

If the 35-year-old leads his country to victory against France in Paris on Saturday night, he will become the first Welshman to win four Six Nations Grand Slams, as many as England and Ireland have managed combined in the expanded era.

That Anglo-French trio straddled Five and Six Nations tournaments while Jones would become the first player to secure a quartet of Grand Slams since 2000, when the competition was expanded with Italy’s introduction.

Jones is also deeply respected outside his homeland. Magne, now 47, was a rampaging and fearsome open-side flanker in the typical French style during his 89-cap career.

Magne won four Grand Slams over seven years, whereas Jones’ achievement would be between 2008 and 2021.

“For us in France he is like Superman,” said Magne.

“You recognise a real champion can stay at this level for a long time and have the humility to do it again every season.”

Magne hopes Jones will land a fourth Grand Slam but doubts it will come this year.

“I would love to see Jones make the four Grand Slams – it would be fantastic,” added Magne.

“I am not against Wales, I am just saying I think France are better than Wales at the moment. It will be very difficult for Wales to beat France in Stade de France.” 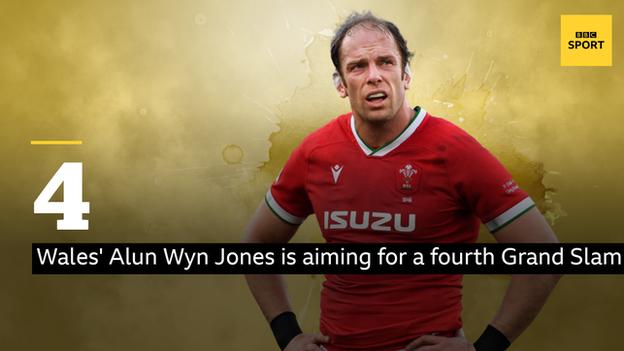 Johnnie Williams, Billy Trew, Dickie Owen, George Travers, Jim Webb and Tom Evans were the trailblazers with success in 1908, 1909 and 1911.

Former Wales captain Ryan Jones says a fourth triumph would be a “wonderful accolade” for his long-time team-mate.

“Part of me might not want him to do it because I quite like the unique club I am in now with him,” he says.

“Joking aside, if anybody deserves it, it is Alun Wyn Jones. He is going to finish his career as the most decorated Welsh rugby player of all time and rightfully so.”

Alun Wyn Jones is revered in Wales, and his mere presence has an effect on his team-mates, says former Wales fly-half James Hook.

“He reminds me of when you are in school when a headmaster walks into the room and you are just aware he is there,” Hook told the Rugby Union Weekly podcast.

“He just has that influence on the players. He is a great athlete and the way he manages his body, it’s ridiculous that his first cap was in 2006 and he is still going strong in 2021.”

Jones is already the world Test record holder with 156 international caps, including nine for the British and Irish Lions, and will make his 148th Wales appearance on Saturday.

His Wales caps alone put him level with former New Zealand captain Richie McCaw, the second-most capped player of all time, but Jones has little time for personal accolades and a fourth Grand Slam would be no exception.

“There is potential for it to be the first one with [Wales head coach] Wayne [Pivac] and I think that’s the focus,” said Jones.

“I refuse to turn the game into a numbers game. Any records don’t belong to the individual but to the game itself.”

It remains uncertain whether the Wales skipper will carry on playing after his current contract expires this summer.

One thing missing from his bulging CV is being chosen as a tour captain for the British and Irish Lions, although he did lead the tourists in their series-winning third Test against Australia in 2013, and also against the Crusaders on the 2017 tour of New Zealand.

Former England wing Ugo Monye, a Lion in 2009, believes a Wales triumph in Paris would cement Jones’ position as the likely Lions leader against South Africa this summer.

“He is my captain at the moment, he has got to be,” Monye told the Rugby Union Weekly Podcast.

“It’s a rite of passage; if you win the Grand Slam you are the captain, and he has already played nine Lions Tests on the bounce.”

One accolade at a time though this weekend.

Cam Ilett, going for his 9th NTFL premiership, is at the crest of an unparalleled football career

Cam Ilett, going for his 9th NTFL premiership, is at the crest of an unparalleled football career