Amazon’s Game of Thrones-style epic has magic, monsters and a very modern approach to steamy scenes

Based on a series of novels by American author Robert Jordan, new fantasy series The Wheel Of Time on Amazon is hoping to cash in on the massive success of Game Of Thrones.

Here, ALISON BOSHOFF reveals how the show was brought to the screen and GoT superfan HANNAH BETTS gives her verdict.

Frankly, I bow to no one in my love for — yet acknowledgment of the ridiculousness of — Game Of Thrones.

For all its game-changing brilliance in the matter of script, scope and performance, there were also some utterly lamentable moments (the Ed Sheeran cameo, anyone?)

But, mostly, it was a wild and brilliant ride and I would not have spent the years between 2011 to 2019 any other way.

Will Amazon’s Wheel Of Time live up to this august and money-spinning predecessor?

For a start, I must stop referring to it as Wheel Of Fortune, which is a cheesy game show rather than some cheesy dragon-and-orc affair. 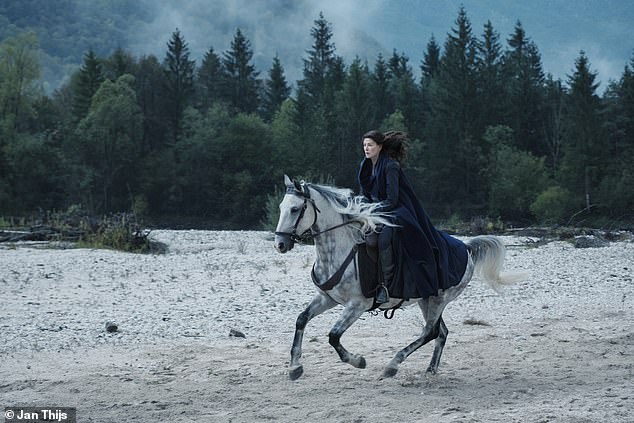 We had been promised the greatest fantasy adventure of all time. On the strength of episode one, the jury’s still out, albeit there is a vast difference between watching bleary-eyed at 8am (when the series hit the UK) than 8pm glassy-eyed with wine.

Matters kick off with Rosamund Pike, steelily beautiful as sorceress Moiraine Damodred, going all Greta Thunberg as she dresses for a quest. ‘The world is broken,’ she intones.

‘Many, many years ago men who were born with great power believed they could cage darkness itself. The arrogance! When they failed, the seas boiled, mountains were swallowed up, cities burned, and the women of the Aes Sedai were left to pick up the pieces.’

Much falls on Pike’s artfully padded shoulders in the subsequent 53 minutes. She bears the burden gracefully, if mysteriously, as glacially attractive fortysomething women tend to do in such dramas.

Her look is brown dye job Gone Girl, with no-make-up make-up, what is clearly an excellent horseback skincare regime and a great line in Matrix-style magic. And top marks on the sexy sidekick (dashing Daniel Henney) with whom she shares not only a hot tub, but the capacity for psychic communication.

Witchy Moiraine heads off to Hicksville, aka Two Rivers, to search for the Dragon Reborn, a messiah figure who will save humanity from The Dark One and the Trollocs (flesh-eating, horned man/beast hybrids).

There she unearths five proteges, older than we discover in the book, and thus up for flirting. We have The Heroically Cheekboney Youth; The Strong Dim One who conveniently kills his wife; The Sly Chancer with a Heart of Gold; The Good Girl with Powers; and The Other Feisty Female.

Dialogue is of the ‘old blood runs deep in those mountains’ sort, while the silly-name quotient runs high. At £8 million an episode, it looks more expensive than early episodes of Game Of Thrones.

Most obviously, the requisite sass and menace that made GoT so compelling was not yet in evidence for Wheel to prove a winning successor. When Game Of Thrones was good, it was very good, crackling with wit, intellect and the screen’s most quotable dialogue.

Opener this may have been, but, in this, WoT episode one fell flat. A woke wonder, or a load of old Trollocs? Only (the wheel of) time will tell.

How they created The Wheel of Time 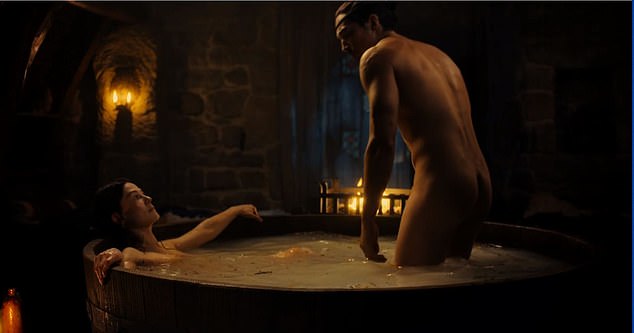 BATTLE OF THE BUDGETS

The rising popularity of streaming services means that TV no longer plays second fiddle to cinema. As a result, big production shows now have bank-breaking budgets.

The final series of Game Of Thrones cost £11 million per episode and both Star Wars spin off The Mandalorian and futuristic Western Westworld were not far behind.

The Wheel Of Time has eight episodes per series and a budget said to be between £55 million and £75 million, which works out at between £6.9 million and £9.4 million per episode, making it one of the costliest TV shows ever made.

Around 600 cast and crew worked on the production, including a 217-strong visual effects team.

Filmed mainly in and around Prague, Amazon received £11.1 million funding from the national government which represented 20 per cent of the costs spent in the Czech Republic, which means that they spent £55 million there.

It is no coincidence that Amazon is pinning its hope on a show in the same vein as Game Of Thrones: fantasy adventures are still considered TV gold.

As one TV critic observed: ‘Game Of Thrones didn’t just open the door to more fantasy commissions, it opened the floodgates. It told TV executives not just to pursue fantasy books or comics, but to gobble them up.’

After Game Of Thrones came The Witcher, about a mutated monster hunter, His Dark Materials by Philip Pullman and Good Omens, a collaboration between authors Terry Pratchett and Neil Gaiman about the birth of satan’s son.

Following The Wheel Of Time are those prequels to The Hobbit/Lord Of The Rings and Game Of Thrones, both due next autumn.

The Oscar- nominated actress Rosamund Pike is the most famous face in the adaptation.

She plays Moiraine Damodred, a member of the all-female Aes Sedai organisation, who have the One Power, a kind of magic.

Moiraine has dedicated her life to finding the Dragon Reborn, a messiah figure who will save all humanity.

The story opens with her arriving in the town of Two Rivers.

Pike, 42, said: ‘I needed to feel that you would believe Moiraine had this power if there were no visual effects — the most important thing for me was that I felt connected to something greater than myself.

‘I felt like a badass. I said to [showrunner Rafe Judkins] when I first saw it, “I need this video of me shooting fireballs to show to my sons again, and again.”

Talking about the CGI effects, she joked: ‘It was great. I did a full-body scan on day one — and then I never had to show up!’ 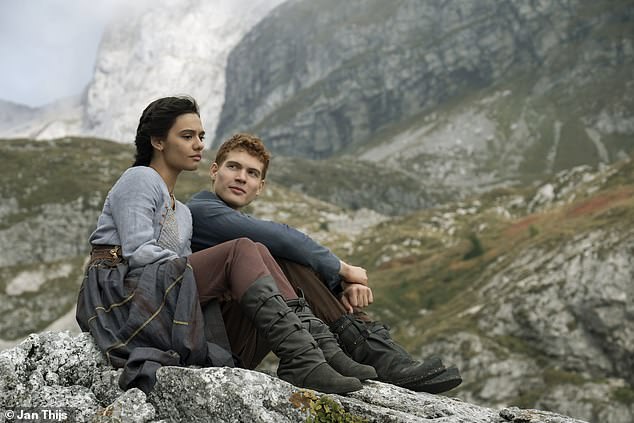 New faces: Josha Stradowski and Madeleine Madden in The Wheel of Time

All started pre-production in August 2019 with six weeks of dialect and stunt training, including horse-riding lessons.

Zoe said: ‘I’ve never been involved in something of this scale. To be involved at the establishing moments too, to be a part of collaborating on costuming, hair and make-up, was something that I had never experienced before.

‘The knowledge that this is a beloved fantasy book series was something that was not lost on us either. There are people who have grown up with the characters in these books, and it means a lot to a lot of people.’

She added that two pandemic-prompted shutdowns made the cast closer.

‘We were able to bond quicker in a way than I think we would have, because we really had to rely on each other as a second family.’

Game Of Thrones was notorious for repeated female nudity, with complaints that much of it appeared gratuitous. By contrast, The Wheel Of Time will feature more naked men than women.

Rosamund Pike said: ‘You see many more naked men than you see naked women, which is quite pleasing, since women have been asked to expose themselves forever and a day. We’ve got all the boys frantically dieting and working out hard for their naked scenes and all of the women going out for lovely dinners.’

Rafe Judkins, who helped adapt the book to the screen, says that the show is suitable to watch with teenagers — and that there is sex and some nudity, but nothing like the frankness of Game Of Thrones.

In the first episode there is implied sex and some male nudity. He said: ‘There’s way more nudity in The Witcher or Game Of Thrones but that’s not really true to The Wheel of Time, and we don’t need it to tell the stories that we have with the characters that we have. It’s an adult world. So, you still see stuff sometimes, but we’re never really super-graphic.’

The author of The Wheel Of Time, Robert Jordan, died aged just 58 in 2007, his books having sold more than 90 million copies in 24 languages.

He served as an army helicopter gunner for two tours in the Vietnam War, winning the Distinguished Flying Cross and Bronze Star.

After Vietnam, he worked as a nuclear engineer for the U.S. navy. 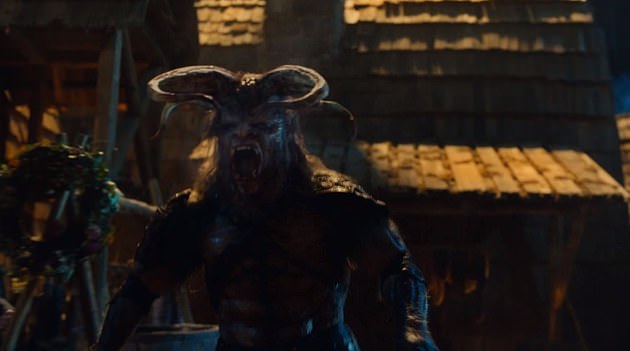 Monstrous: A flesh-eating Trolloc in the new show

However, he fell at a shipyard, which led to a blood clot that almost killed him and meant he needed a cane to walk.

This injury was the trigger for a new career as a writer. He wrote a historical trilogy under the pseudonym Reagan O’Neal, then a Western as Jackson O’Reilly. This was followed by novels based on the Conan The Barbarian franchise.

Then in 1990 he created The Eye Of The World, his first in The Wheel Of Time series.

The hero, Rand al’Thor, is just a boy when he and his friends start to try and save the world from the Dark One in what becomes an epic saga.

After falling ill in 2005 with a rare blood disease, he announced he was working on another novel — and left extensive notes which writer Brandon Sanderson used to finish the books after his death.

Rosamund Pike said: ‘When I found out that Robert Jordan had been a helicopter gunner in Vietnam, I thought, oh, that’s where this big fantasy world originates. That’s why he’s interested in men who had power and abused it and broke the world.’

THE Wheel Of Time makers created their own studio and leased a gigantic 32,000 sq m production hall on the outskirts of Prague in the Czech Republic.

Pike said: ‘There’s not much I can tell you about trekking across its gigantic set, a former truck factory, because I signed a scary-looking NDA.’

Initially, producers looked at Los Angeles, London, and Budapest but realised that they would need to buy industrial buildings in Prague to realise their ambitious vision.

It is said that the whole town of Two Rivers was built — and then burned down as part of the storyline.

Hundreds of passengers are evacuated from London’s Kings Cross station as armed police race to reports a man boarded a train carrying a suspicious package: One person...

The Omicron variant can still cause infection in people that have both received the COVID-19 vaccine and have have previously had the virus, one expert says.Dr Angelique Coetzee, chairperson...

Mother accused of selling daughter, 21, for $15,000 to Uber driver who slit her throat

The mother of a young Afghani woman who was murdered by her husband has been accused of forcing her daughter into an arranged marriage for a $15,000...

Johnson to the Sunday Telegraph: Britain will witness major changes after the Brexit deal is reached