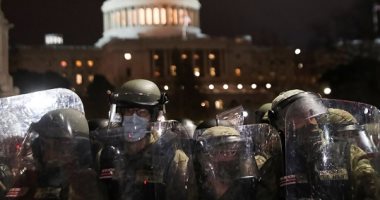 The Congress sessions reconvened after the building was closed, for hours due to the storming of supporters of outgoing US President Donald Trump.

And according to US media including Fox News and “Reuters” agency, the US Senate reconvened after closing the building for hours.

Dozens of National Guardsmen equipped with riot control equipment were deployed to keep protesters away from the Congress building in Washington.

For her part, US House Speaker Nancy Pelosi announced that House members will resume counting the electoral college votes to confirm the outcome of the November presidential elections, as soon as the Congress building is secured after pro-Trump rioters stormed the building..

Earlier, demonstrators who supported the US President, Donald Trump, stormed the courtyards of Congress where the confirmation session was on Biden’s victory, according to urgent news for Al Arabiya..

Trump protesters: 'I just want the real winner to be president'

More than 13 people arrested during the Washington demonstrations

Queen honours Lovehoney with an award for enterprise