American poet Louise Glück won the Nobel Prize in Literature on Thursday for her ‘candid and uncompromising’ work, which looks unflinchingly and with biting humor at loss and trauma, especially in family life.

She joins a handful of American poets who have received the prize, which has been dominated by novelists since the first award in 1901. She is also one of the few women honored – the 16th female Nobel Literature laureate.

Glück is the first American to win the award since Bob Dylan was honored in 2016. Before Dylan, Toni Morrison won in 1993.

The Nobel Committee praised Glück ‘for her unmistakable poetic voice that with austere beauty makes individual existence universal’ in its citation.

Announcing the award in Stockholm, Mats Malm, the Swedish Academy permanent secretary, said he had spoken to Glück, and the news ‘came as a surprise – but a welcome one as far as I could tell’.

The 77-year-old, who shuns most publicity, told Sweden’s TT news agency from her home in Cambridge, Massachusetts, that her phone was ringing off the hook, and she was struggling to express her feelings about the award. 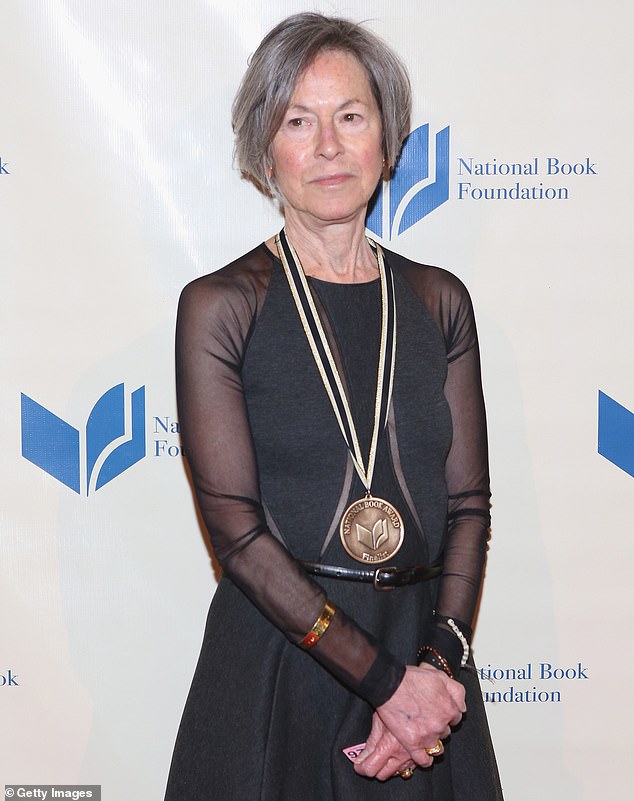 American poet Louise Glück won the 2020 Nobel Prize in Literature on Thursday for her ‘candid and uncompromising’ work, which looks unflinchingly and with biting humor at loss and trauma, especially in family life 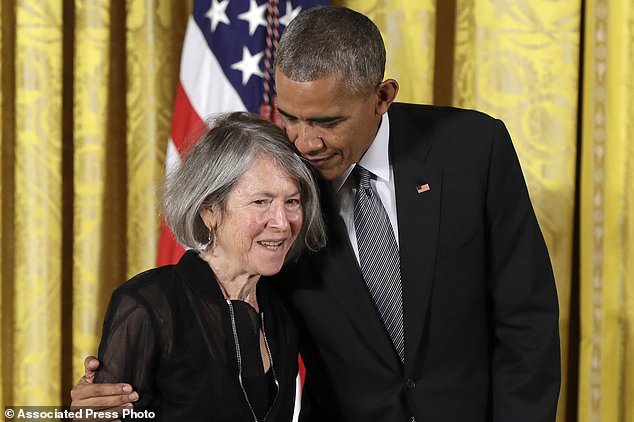 President Barack Obama embraces Glück before awarding her the 2015 National Humanities Medal during a ceremony at the White House on September 22, 2016

In a call with the Nobel Committee after her win was announced, Glück said: ‘My first thought was I won’t have any friends, because most of my friends are writers, but then I thought no, that won’t happen.’

In a 2012 interview with the Academy of Achievement, Glück noted that ‘worldly honor makes existence in the world easier’ but said he true goal as an artist was ‘not capable of being had in my lifetime.’

‘I want to live after I die, in that ancient way,’ she said. ‘And there’s no way of knowing whether that will happen, and there will be no knowing, no matter how many blue ribbons have been plastered to my corpse.’

New York-born Glück, who is an adjunct professor of English at Yale University, made her debut in 1968 with ‘Firstborn’, and ‘was soon acclaimed as one of the most prominent poets in American contemporary literature,’ the committee said.

Glück’s ‘unsparing explorations of the self and its place in the world in volume after volume have created poems of beauty and revelation,’ Yale President Peter Salovey said in a statement.

He added that Glück is a ‘galvanizing teacher, who has given herself unstintingly to students who revere her.’ 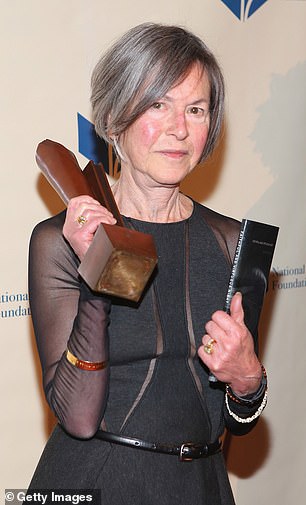 Raised in a family with Hungarian Jewish origins, Glück has spoken of how a teenage struggle with anorexia, and the therapy she received for it, influenced her incisive writing.

‘Louise Glück’s voice is unmistakable. It is candid and uncompromising, and it signals that this poet wants to be understood. But it is also voice full of humor and biting wit,’ said Anders Olsson, chairman of the Nobel literature committee. ‘This is a great resource when Glück treats one of our great topics, radical change, where the leap forward is made from a deep sense of loss.’

Olsson said Glück’s 12 collections of poetry were ‘characterized by striving for clarity.’ Her verses, which often draw on classical Greek and Roman myths and examine family life, were marked by an ‘austere but also playful intelligence and a refined sense of composition,’ he said.

Glück’s poetry collections include ‘Descending Figure,’ ‘Ararat’ and ‘The Triumph of Achilles,’ which was published in 1985 and won the National Book Critics Circle Award.

In contains one of her most anthologized poems, the spare and despairing ‘Mock Orange,’ in which a flowering shrub becomes the focus of a wider wail of anguish about sex and life: ‘How can I rest? / How can I be content / when there is still / that odor in the world?’

The committee described her 2006 collection ‘Averno’ as ‘masterly’ and ‘a visionary interpretation of the myth of Persephone´s descent into hell in the captivity of Hades, the god of death.’

Glück is the recipient of many awards, including Guggenheim and National Endowment for the Arts fellowships, the American Academy of Arts and Letters Gold Medal in Poetry and the National Humanities Medal.

Nobel laureates receive a 10 million kronor (more than $1.1 million) prize and are usually feted at a banquet in December, but the event was canceled this year because of the coronavirus pandemic. This year’s winners will be invited to attend in 2021. 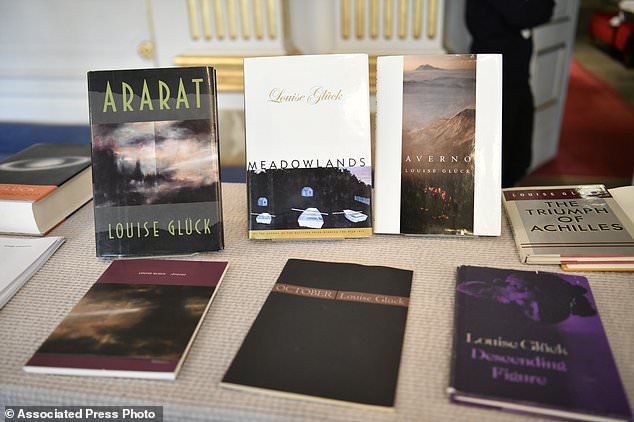 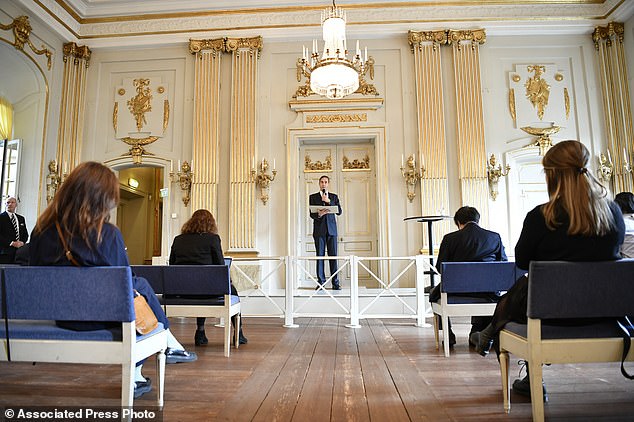 Mats Malm, Permanent Secretary of the Swedish Academy, announces Glück as the winner of the 2020 Nobel Prize in literature, in Stockholm on Thursday

The literature prize comes after several years of controversy and scandal for the organization that awards the accolade.

In 2018, the award was postponed after sex abuse allegations rocked the Swedish Academy, which names the Nobel literature committee, and sparked a mass exodus of members.

After the academy revamped itself in a bid to regain the trust of the Nobel Foundation, two laureates were named last year, with the 2018 prize going to Poland´s Olga Tokarczuk and the 2019 award to Austria´s Peter Handke.

But Handke´s prize caused a storm of protest: A strong supporter of the Serbs during the 1990s Balkan wars, he has been called an apologist for Serbian war crimes. Several countries including Albania, Bosnia and Turkey boycotted the Nobel awards ceremony in protest, and a member of the committee that nominates candidates for the literature prize resigned.

On Monday, the Nobel Committee awarded the prize for physiology and medicine for discovering the liver-ravaging hepatitis C virus. Tuesday´s prize for physics honored breakthroughs in understanding the mysteries of black holes, and the chemistry prize on Wednesday went to scientists behind a powerful gene-editing tool.

Still to come are prizes for outstanding work in the fields of peace and economics. 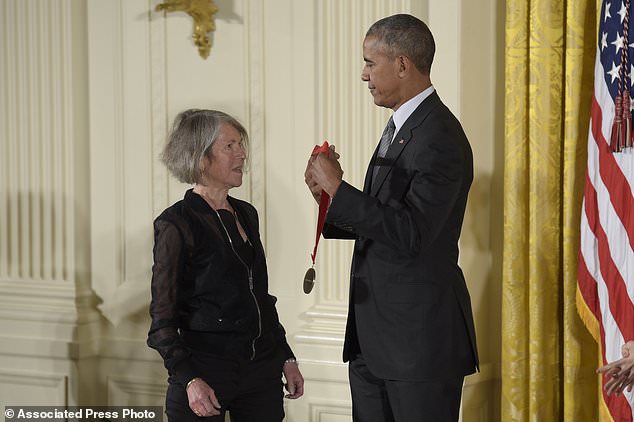 President Barack Obama presents Gluck with the 2015 National Humanities Medal during a ceremony in the East Room of the White House on September 22, 2016

Noor Hossain and the image that helped bring down a dictator

Boris Johnson: Britain condemns Trump’s unrest and his questioning of the election results