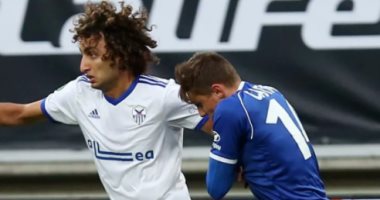 The Cypriot team Anorthosis Famagusta, who plays among the Egyptian international Amr Warda, suffered a new loss after falling to its Belgian host Gent 2-0, which was held this evening, Thursday, at the “Glamco Arena”, as part of the second round of Group B of the round. Groups for the European Conference League.

The two goals of the match came through Tariq Tesodale and Sven Cooms in the 28th and 81st minutes, respectively.

The match witnessed the presence of Amr Warda in the official and basic formation of the match before he was replaced in the 78th minute of the match.

Amr Warda touched the ball 37 times, while the accurate passes came in 19 out of 22, with a rate of 86%. He also sent one cross and two long balls.

He also lost the ball eight times and got one foul for 3 against him, while he was exposed to Block during a shot on goal.

With this result, the Belgian Ghent occupies second place in the standings of the second group with 6 points, with a difference of goals from leaders Partizan Belgrade, collected from the victory in the two rounds, scoring 3 goals and keeping a clean sheet.

On the other hand, Anorthosis Famagusta is at the bottom of Group B with zero points, after losing for the second time and conceding four goals so far.

Amr Warda has previously played in 3 continental championships, the Egyptian star Mohamed Salah, the top scorer for the Liverpool team, who participated in the European Champions League and the European Super, which he obtained with the Reds, in addition to the European League.

The Anorthosis team was drawn in the second group of the tournament with teams: Belgian Gent, Serbian Partizan and Estonian Flora.

The U.S. Postal Service will slow down some mail deliveries

Should I buy PepsiCo shares after a positive view from Morgan Stanley?

Should I buy PepsiCo shares after a positive view from Morgan Stanley?