An American has spoken of his fears that he could be jailed for two years in Thailand for leaving a one star review of a hotel.

Teacher Wesley Barnes, 37, originally from Pine Bluff, Arkansas, but who now lives in Thailand, spent two days behind bars after his arrest on September 18.

In June he spent two nights at the Sea View Resort on Koh Chang Island in June.

Most of the hotel’s reviews are positive but Barnes left several reviews on social media criticising the hotel and its staff.

His unflattering online reviews about his holiday led the owner to file a complaint that Barnes had posted unfair reviews.

One of his reviews accused the hotel of ‘modern day slavery’ and that some of the staff had an attitude. 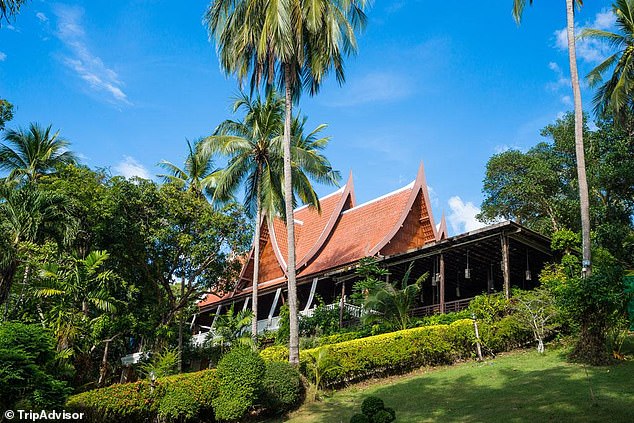 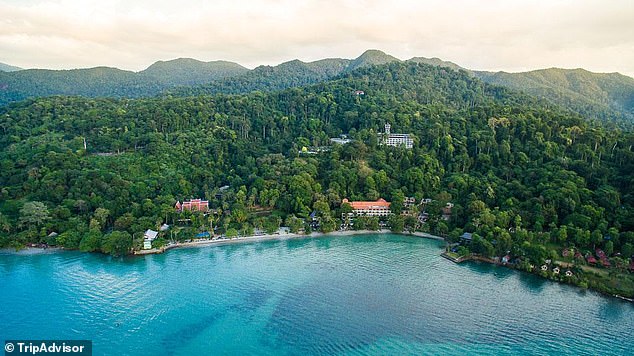 The American, who lives in Thailand, stayed at the hotel in June. He could now be jailed for two years and fined $6,300

Authorities said that Barnes’ words had caused ‘damage to the reputation of the hotel’ because he had posted on several sites.

They added that he had quarreled with hotel staff over not paying a corkage fee for alcohol.

Barnes was arrested at his place of work by immigration police and returned to Koh Chang on Friday, September 18.

He was jailed the following day but then freed two days later on bail.

Speaking exclusively to MailOnline of his time in prison Barnes said: ‘It was scary. I went to a local prison in Trat.

‘There were people in there doing 25 years. I met a Swedish guy in there that had stabbed a guy 16 times on Koh Chang Island. So needless to say, it was a scary place.

Barnes has indicated that he wants the situation resolved as soon as possible. He is back in court on October 6.

He said: ‘Yes, I fear going to prison. I am willing to resolve this case with the hotel.

‘I have been in contact with the US Embassy. They have been very nice and helpful.

‘I would like to stay in Thailand. Overall Thailand is a beautiful place and most people are extremely nice.’ Thailand’s defamation laws are extremely tough and they have long drawn scrutiny from human rights groups and press freedom bodies.

Barnes has said that he and a friend were drinking gin on the beach outside of the hotel’s restaurant.

He added that to avoid drinking and driving they decided to eat in the restaurant. They were told that as they had the gin they would have to pay a corkage fee of 500 baht ($15.80).

Staff at the hotel claim that they were insulted when they asked for the corkage fee.

Barnes said: ‘We never insulted anyone.

‘We complained a little to the waitress. No-one made rude or insulting comments. Eventually my friend said he would pay the 500 baht.

‘The manager came over with a lot of attitude and lectured us on why everyone needs to pay to bring an outside bottle.

‘We were eventually not charged.’ 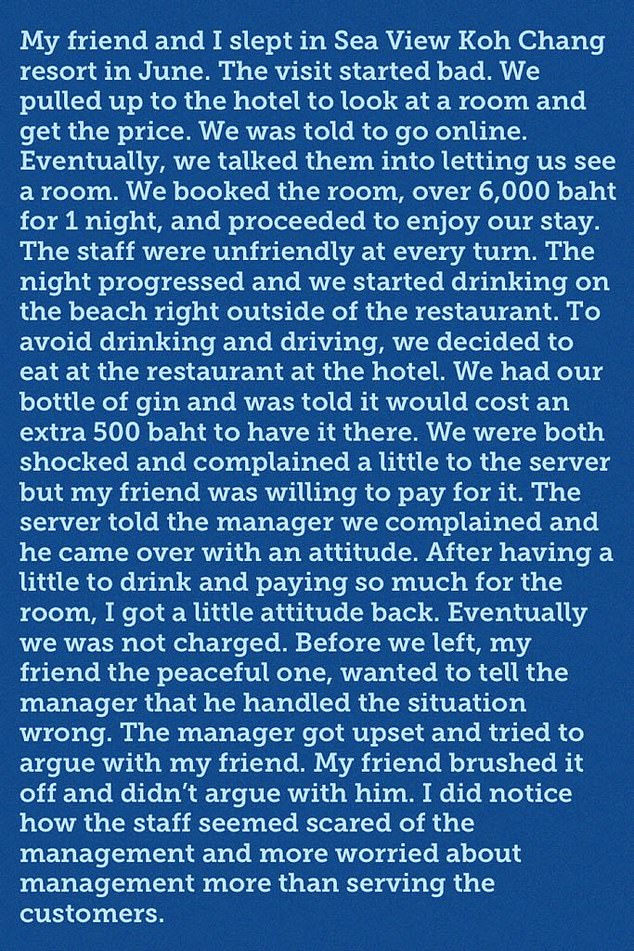 Wesley Barnes’ review of the restaurant incident at the Thailand hotel 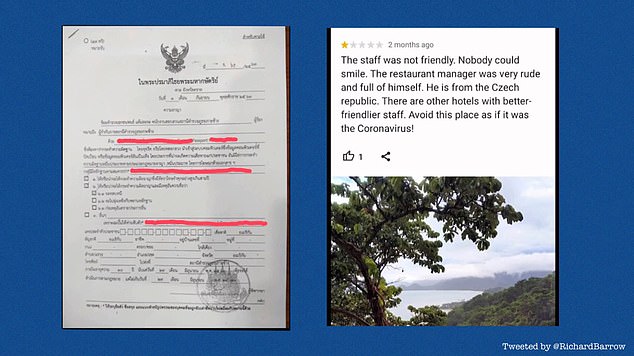 The lawsuit facing Wesley Barnes and one of his critical reviews

Barnes claims he later saw the same manager shouting and being overly aggressive to a Thai staff member, which led him to write his review and make his modern slavery complaint.

The Sea View Resort said legal action was only taken because Barnes had penned multiple reviews on different sites over the past few weeks.

The hotel said: ‘We chose to file a complaint to serve as a deterrent, as we understood he may continue to write negative reviews week after week for the foreseeable future.’

It has issued a five page lawsuit, shared with Barnes, after the hotel staff claimed they were unable to contact him.

The hotel claims there are three main reasons for the lawsuit.

It said: ‘He left fabricated stories on his reviews on TripAdvisor and Google that included xenophobic connotations, accusations of slavery and even comments that could mislead readers to associate our property with the Coronavirus.

‘He had been posting reviews roughly 1-2 weeks apart with obvious defamatory intentions.

‘Despite out multiple efforts to contact him to resolve this in an amicable way for well over a month, he chose to ignore use completely.

He only replied to emails, messages on reviews sites, etc. once he had been notified of our complaint by authorities.’

Earlier this year, a Thai journalist was sentenced to two years in prison for posting a tweet referencing a dispute over working conditions at a chicken farm owned by the Thammakaset company.